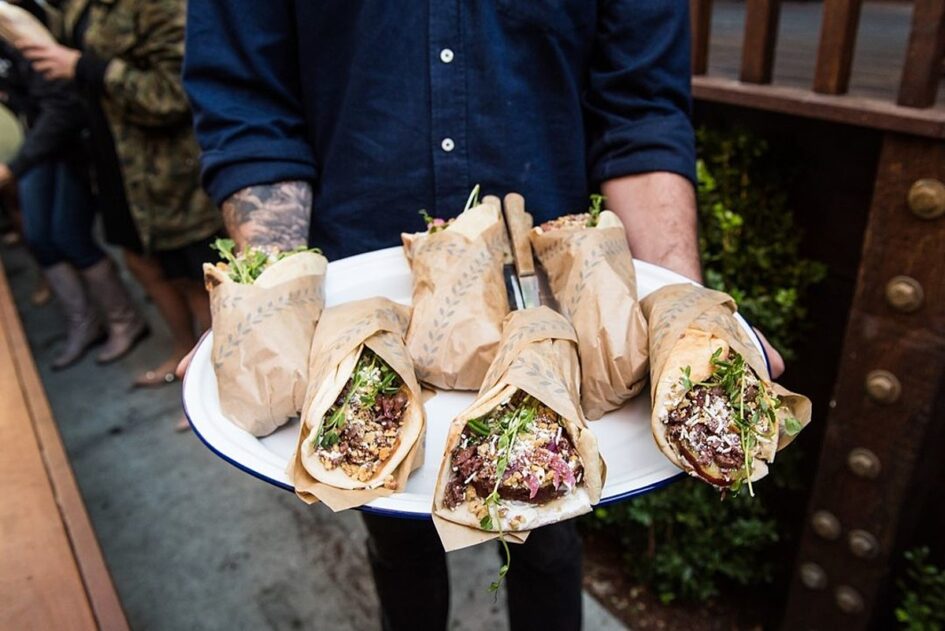 San Francisco’s beloved Greek chain Souvla will change its menu for the first time since opening in 2014 to add a brand new plant-based lamb-style protein. Souvla announced that it will begin offering the vegan lamb at all four locations around the San Francisco Bay area on October 20. Recognizing the growing demand for plant-based options, the local favorite partnered with food tech startup Black Sheep Foods to develop a vegan lamb from pea protein and patent-pending flavor compounds.

Black Sheep Foods’ vegan lamb will be featured on Souvla’s menu alongside the existing list of proteins that include lamb, chicken, pork, and roasted sweet potato. The restaurant will offer the plant-based lamb for both its signature salads and sandwiches, giving plant-based customers a chance to eat at Souvla’s four locations.

“Since our inception, we have intentionally never changed the menu, so this is a monumental, forward-thinking moment for Souvla,”  Souvla’s Founder and CEO Charles Bililies said in a statement. “We had yet to find a plant-based meat that made sense for our restaurants, but when we tried Black Sheep Foods, we felt it was the right moment to add a plant-based offering to our menu. This will expand upon our vegetarian offerings, which we’re excited to offer our guests.”

Vegan lamb products have recently entered the market as plant-based food companies begin to move into other protein categories. The vegan lamb featured at Souvla will be Black Sheep Foods’ product debut. Through delivery services such as Caviar and Doordash, local consumers can order the plant-based lamb directly to their doorsteps. Souvla will also be making the new plant-based menu item available nationwide through Goldbelly.

Following the initial product launch, Billies will join Black Sheep Foods as a strategic advisor, helping expand the upcoming vegan start-up. The food tech company plans to expand its distribution range in the near future, entering a relatively untapped market. The vegan lamb will remain exclusive at Souvla for six weeks before expanding to other San Francisco Bay area restaurants.

The company also wants to increase the accessibility of these limited game meats. By creating a plant-based alternative, the food tech company is providing a sustainable, affordable option for several proteins that consumers cannot otherwise find.

“Our eating habits are supply chain led, meaning we eat animals that grow the fastest, not those that are the tastiest,” Kumar said in a statement. “At Black Sheep Foods, we want to speed up the adoption of plant-based meats by making plant-based alternatives tastier than commercial animal meat, not just mimicking them.”

Vegan lamb hit the market in the United Kingdon last month, marking the first time that a plant-based whole cut lamb roast was commercially released. Brought to consumers by chef Derek Sarno’s Wicked Kitchen, the No-Lamb Roast with Pomegranate Glaze became the first-to-market vegan lamb product, ever. Though some gyro-style meat hit the market before, this is the first whole cut vegan lamb.