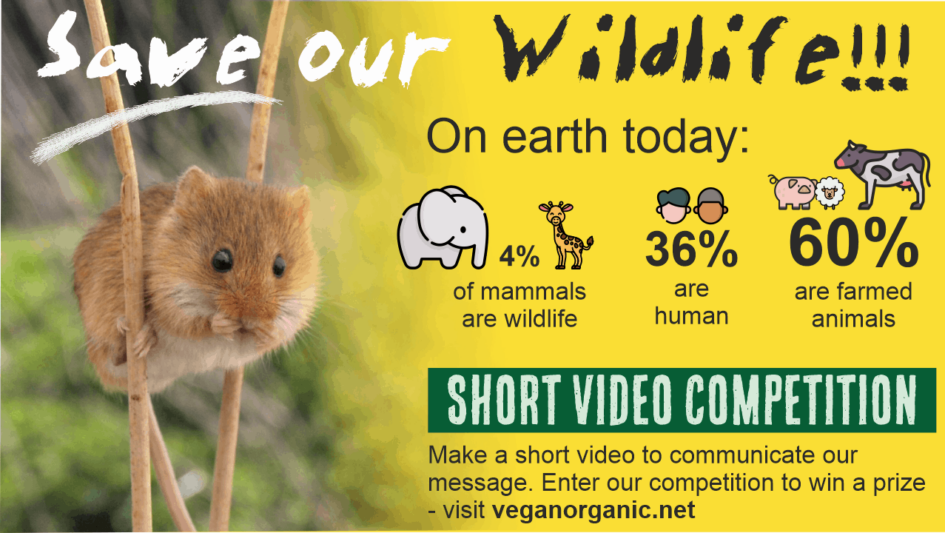 Make a video and be part of the The Vegan Organic Network social media campaign targeting the public and delegates attending COP26 the UN Climate Change Conference being held in Glasgow this November. The Vegan Organic Network (VON) is an educational charity established 1996 and the only organisation in the UK solely working for food to be grown the veganic way.

VON is launching their exciting new worldwide competition to create awareness that a staggering 60% of mammals on earth today are farmed animals (most in factory farms), 36% are humans and a miniscule 4% are wildlife.

Inspired by a recent UK based scientific study providing these figures VON feel that not much has changed since then; if anything the situation has become even worse.

In addition birds did not fare much better; out of all of the birds on earth, 70% are farmed chickens and other farmed birds, whilst 30% are wild birds.”

VON advocate that by adopting a plant-based food system, land used by farm animals can be converted to wildlife habitats.

“The VON competition is also about giving environmentalists a voice and share the message that urgent action is needed to save our wildlife in peril, preserve biodiversity, protect the environment and encourage healthy horticulture and agriculture.”

“It is now widely accepted that we are in the Earth’s sixth mass extinction event where species of both flora and fauna are disappearing at a rate never seen before.” says Dan Graham of VON….

“We are looking for some real proactive thinking, encouraging entrants to get creative and come up with some exciting and innovative artwork and videos and send them in to us so we can together raise awareness.”

Followers of the methodology used by VON do not use animal manures, chemical fertilizers or agrochemicals when growing their fruit and vegetables. VON also vigorously promotes a healthy vegan lifestyle.

The competition is open to everyone; to schools, to youth groups and aspiring videographers. Further information is on their website as well as interesting background article written by Colleen McDuling, the VON science advisor.

“Together, we can save our wildlife and preserve Earth’s biodiversity.”

More about the competition:

Be as creative as you like, videos must be 60 seconds or under. Submit as many entries as you like, we want to spread the message that there is a ‘Wildlife Emergency’.

Sponsors are welcome to support too.

‘Veganic’ is a combination of two words ‘vegan’ and ‘organic’. It’s a guarantee that food is grown in an organic way with only plant based fertilizers, encouraging functional biodiversity so pesticides are not necessary. No chemicals, no GMO and no animal by products in any part of the chain.

Veganic food is resilient to the largest problems facing humanity i.e. environmental destruction, pollution of the sea and air and soil erosion.

Veganic otherwise we are dependent on animal agriculture, chemicals, pesticides and herbicides.

In essence, veganic is a logical step beyond organic for those who seek safe food grown in a sustainable manner.

Vejii Goes Public: “We Think This is Very Exciting & Indicative Of the Larger Potential Of the Market As a Whole”