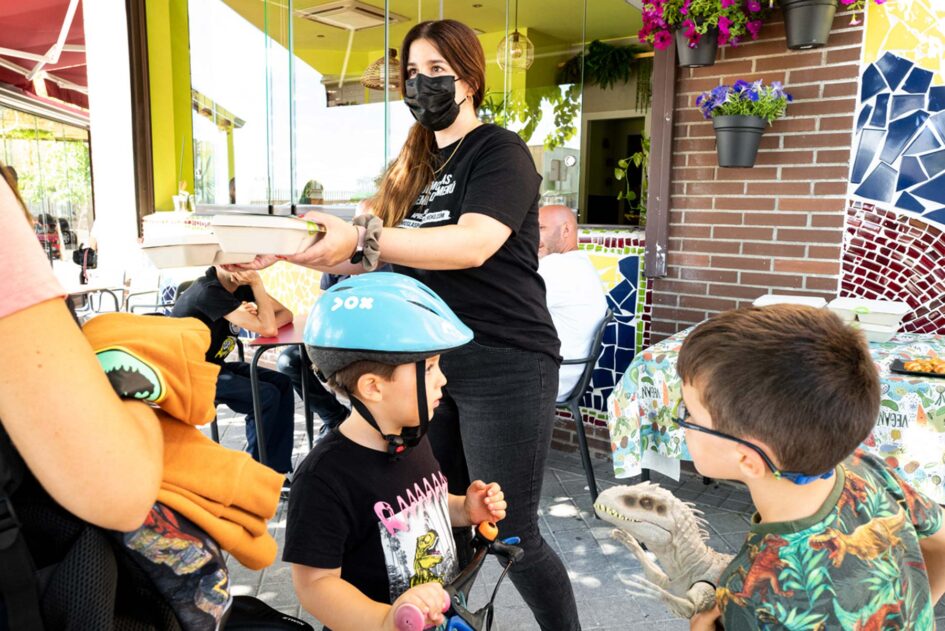 This has been another busy month as Million Dollar Vegan staff and volunteers sought to support minoritized and underserved communities, educate the wider public of all the positive ways that eating plant-based can benefit people, animals and the planet, and showcase delicious vegan foods. This is what we have been up to …

Our team in Spain, coordinated by Paula González, has been supporting local vegan businesses throughout the pandemic. With their help, we have been taking delicious vegan food to the general public, acting to support individuals and communities in crisis, as well as providing a ‘thank you’ to public health workers. This month, Million Dollar Vegan partnered with La Huella Vegana to provide 250 focaccia sandwiches free of charge to residents of Rivas Vaciamadrid. The delicious sandwiches contained hummus, pico de gallo, sauteed mushrooms, olives and vegan cream cheese with fresh herbs and was served with Canarian-style new potatoes with hot sauce.

Sara Latorre, CEO of La Huella Vegana says: “The pandemic has highlighted the urgent need to adopt a sustainable lifestyle and habits that are respectful to the environment. Veganism represents the only socially, ecologically, and politically just alternative in our current situation.”

Acting For Those Living in Unsafe Spaces in Mexico

In the central Mexican city of Aguascalientes is a community that has built its homes beneath transmission towers. It is not safe to live here but there is nowhere else for them to go while their work – including the manufacture of bricks for construction – is located here. This community lacks many things we see as necessities, such as safe transportation routes and security. It is particularly difficult for the children who live there.

And so we partnered once again with our friend Miguel Soria and other volunteers who delivered 200 tortas made by Avocado Punk using Miguel’s Holy Van. Not only were we able to supply a fresh, tasty meal but we also talked with residents about the cost of food and how eating plant-based can be that much cheaper. The tortas were a big hit, and we were asked repeatedly when we might return, which we hope to do again soon.

Casa Frida is a refuge that provides rescue, accommodation, care and comprehensive healthcare for LGBTQ+ people fleeing extreme violence, persecuted and displaced people, people who migrate and young people who are expelled from their homes because of their sexual orientation, gender identity and / or expression, including people with HIV. We were delighted to be invited to give a cooking class and Million Dollar Vegan volunteers taught residents and visitors how to prepare tacos al pastor, tofu scrambled with chorizo, ceviche and hamburgers – all vegan of course. They were able to share their experiences of being vegan and hold a Q&A session about veganism and related topics.

For Amazon Day, we held an activity for 120 people at Patria Grande soup kitchen in Buenos Aires where we cooked vegan choripanes and shared information about the impacts of animal agriculture in our territory. We also had a great time with the children who came, painting and drawing, singing and talking about our favorite animals.

The Amazon rainforest is the largest natural reserve on the planet with seven million square kilometers spread over seven countries in America. But, big as it is, it is in danger. Deforestation, including through deliberately setting fires, to create land for cattle ranching is devastating the forest. Governments are failing to act, while in Latin America, environmental defenders are increasingly harmed and killed. The international organization Global Witness has just revealed that 2020 was the deadliest year since the entity presented these reports, with 227 environmental defenders murdered. Isolation due to the global pandemic has made these activists even more vulnerable.

We can help protect the Amazon by boycotting one of the driving forces behind its destruction: meat. And so, we seek opportunities to cook vegan food and share knowledge with the wider public, including acting in solidarity with those who live in socially vulnerable neighborhoods.

And although this action was about the Amazon, there are many more reasons to move towards a more just food system. The current system is based on the suffering of animals, the exploitation of the land, and the use of agrochemicals and antibiotics that harm the health of the population. We think the world deserves better.

Million Dollar Vegan’s Mexico Campaign Manager Jessica Gonzalez Castro, together with a team of volunteers, is helping 20 people from Playa del Carmen adapt their diets to plant-based. Many participants have existing health conditions relating to the gallbladder, ovaries, and excess weight, while others suffer colitis and rheumatism. All hope to see a change for the better as they eliminate animal products and find new ways of eating healthy plant-based foods.

The participants have already met our nutritionist, and attended consultations and a workshop to learn some tips and tricks, try new foods and understand more about the positive choices they can make. We are delighted to support this group and hope that their health journeys will inspire others to also consider eating plant-based. With their help and commitment, we also hope to acquire scientifically useful data that will add to existing research about the health benefits of a plant-based diet.

In Solidarity with Unhoused People in Hungary

This month, we partnered with Csir Kevin, Prove Magazine, and Hungarian activist Raul Vida to execute our biggest Hungarian food solidarity event to date! We donated 500 meals in the city of Kecskemét, mainly to the unhoused community and low-income families, but also to passers-by who were curious about vegan food.

We made 250 servings of plant-based spaghetti Bolognese and 250 servings of vegan paprikás krumpli, a traditional and much-loved Hungarian dish with plant-based sausage and gravy. Many were surprised by how tasty the food was, with one woman commenting: “It’s unbelievable that there’s so much choice nowadays… you really don’t need to eat meat.” Several people even came back for seconds!

During the food distribution, we handed out hundreds of educational Million Dollar Vegan pamphlets, informing people about the relationship between pandemics, animal suffering, malnutrition, and the food choices we make. We hope that, through this action, people will feel empowered to make kinder, healthier food choices both for themselves and others.

We also partnered with vegan activist Kinshu Arora to execute our first ever food solidarity event in the UAE, and it was a huge success!

We handed out vegan shawarmas (made with Beyond Meat) from Mantoushe Restaurant, and sweet treats from Majama vegan bakery, to 100 shoppers at a popular shopping mall in Dubai – giving them their first taste of vegan food, in addition to information about the benefits and basics of going vegan.

People enjoyed the food so much, and were so surprised that it contained no animal products, that several signed up for our free ’30 Day Vegan Challenge’ on the spot.

We look forward to doing more food-share events in the UAE, where animal agriculture is sadly on the rise. The country now slaughters around 2.09 million sheep, cows, camels and chickens annually, to produce more than 24,000 tonnes of red meat, 36,000 tonnes of chicken meat, 136,000 tonnes of milk and nearly 266 million eggs. This has an increasingly negative impact on our planet and on public and personal health.

Returning to the Boys & Girls Club in Los Angeles

All children deserve a good education, a healthy lifestyle, and the chance to have a positive influence on their community. That’s why, this month, we partnered with Veggie Grill to provide 150 free plant-based meals to families in Boyle Heights via the Boys & Girls Club of West San Gabriel Valley & Eastside. We also donated educational children’s books, handed out by #VeganStrong author SGT VEGAN.

The community of Boyle Heights is one of the most densely populated yet underserved areas in Los Angeles, and more than 90 percent of the people living here are Latines. The children here struggle daily with real-life circumstances of poverty, low educational attainment, gang violence, substance abuse, and poor health outcomes. The mission of the Boys & Girls Club is to provide innovative and stimulating academic, leadership, and athletic programming in a safe and nurturing environment so that these children have the opportunity to excel in school and career.

One of the ways we can care for underserved youths is by providing them with nutritious food and giving them the opportunity to learn about the lasting health benefits of a plant-based diet. We are extremely grateful to Veggie Grill for their support in making this event possible.

Healthy Food for Children in Kenya

Throughout September and with the support of Maasai leader Jack Lekishon, we donated another 15,000 meals to school children in the Maasai Mara by providing food supplies for Mara Valley Vegan School and Talek Vision Vegan School. The feedback has been very positive.

Says Sankei Robert, Head Teacher of Talek Vision Vegan School: “In our school we enjoy eating plant-based foods because they’re rich in vitamins that can prevent diseases in our bodies. By eating vegan meals, the teachers get lots of energy to teach for their lessons without getting exhausted. The pupils also appear to concentrate better and have more energy in class.”

Mr. Ntayia, a teacher at the same school told us: “A vegan diet is rich in nutrients and great for children. It helps them to maintain a healthy weight, and appears to improve their overall health and energy levels as well. In addition, having a healthy plant-based meal in their stomach improves the concentration levels of school children in class, and gives them the energy to participate in co-curriculum activities.”

Student Melita Naurori told us: “I really enjoy our vegan meals because they give me energy and keep me healthy. I especially like cashew nuts, bananas and tomatoes.”

This month, our Argentina Campaign Manager, Jacqueline Guzmán, coordinated a gardening workshop at Barrio Padre Mugica slum. We partnered with the activist organization Consciente Colectivo which fights against the climate crisis and seeks social justice.

In creating a community garden and teaching people how to grow their own food, we can champion food sovereignty, and help people control production, distribution and consumption of foods. This is essential for underserved populations which usually have less access to safe, nutritious and healthy food, while bringing us all closer to a fairer and more equitable system.

This community garden not only provides local residents access to quality and nutritional plant-based foods at lower cost. It also created an educational, social and awareness project.

The day was a huge success. We all learned a lot about the process of how to grow our own and everyone was able to take home plants and seeds. But before then, we enjoyed a delicious vegan pizza, made all the more enjoyable because we ate together as a community.