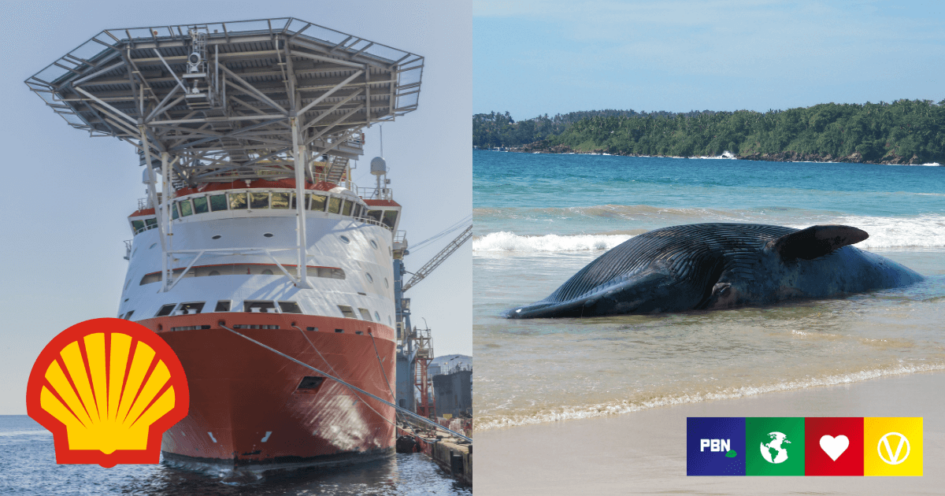 The announcement has enraged marine activists and environmentalists, who are concerned that the project will destroy habitats and harm marine animals, including migrating whales.

On October 29, 2021, Shell Exploration and Production South Africa placed a notice about the surveying.

In it, the titan oil company said the project will cover an area of around 6,011km2. It will stretch roughly from Port St Johns to Morgans Bay.

The survey won’t get closer than 20km from the shore, it said, and will cover water depths between 700m and 3,000m.

It’s slated to kick off on December 1. Shell estimates the project will take four to five months to complete. However, this may change depending on fluctuations of weather and current conditions.

What is a seismic survey?

Seismic surveys are designed to locate subsurface deposits of crude oil, natural gas, and minerals – enough to be commercially viable.

This is done by recording artificially produced shock waves – seismic waves – in the earth.

The seismic waves are created by explosive charges set off in shallow holes. Trucks carrying heavy plates that vibrate into the ground can also be used.

These shock waves penetrate the earth, reflect off subsurface formations, and resurface. They’re then recorded by receivers called geophones.

For 3D seismic surveying, thousands of geophones can be used, and are spread out across the land or water. The geophones record the time it takes for the seismic waves to complete their journey. This allows a geophysicist to develop a 3D image of the subsurface, which can indicate where oil or gas may be.

The energy source is moved to different locations, and the process is repeated. Further, seismic data is licensed and can be sold off to brokers and other companies.

Why is seismic exploration controversial?

Such testing can be extremely harmful to marine life, according to the Center for Biological Diversity. The charity explains that the airguns used can exceed 250 decibels and can be heard for miles.

This can cause temporary or permanent hearing loss in wildlife. It can also disrupt natural behaviors and life cycles like foraging, nursing, and breeding.

Further, seismic surveys can heavily impact animals like whales and dolphins, who rely on sound waves to navigate and communicate.

The center adds that such exploration can increase the risk of oil spills and pollution.

“Marine animals are highly sensitive to acoustic sound. Marine fish and mammals depend on sound for communicating with group members and young, food-finding, reproduction, avoiding predators and hazards, navigation and sensing their environment,” he explained.

Moreover, seismic surveys can result in changes in animals’ physiology, which could result in reproductive issues or death, the publication said.

Some communities have voiced concern about Shell’s announcement, and its potential impact on the region’s dolphins, whales, seals, penguins, sharks, crabs, and other wildlife.

“Our government does not want to listen to the people and ask what kind of a development they need in that area; instead they are being used by businesses,” he said. Nongcavu revealed that 34 whales died when the same survey was carried out in Richards Bay.

“We are totally against the drilling of oil and gas in the ocean. What help will this bring to the communities in the area?” he added.

According to the petition, the operation will continue “around the clock” – firing air guns every 10 seconds.

In a statement, Oceans Not Oil said: “At a time when world leaders are making promises and decisions to step away from fossil fuels because climate science has shown we cannot burn our existing reserves (let alone drill for more), offshore oil and gas Operation Phakisa is pushing ever harder to get its hands on a local supply of gas.

“Shell must answer for how the harms done during this survey and any exploration drilling done hereafter are part of its energy transition plan to control global warming.”

The petition warned that the project will “panic and damage” marine life. At the time of writing, it has garnered more than 21,000 signatures.

Cannabis Edibles Do Expire, So You Should Probably Trash That Six-Month-Old Cookie

Burger King is Launching Impossible Nuggets This Month: What We Know