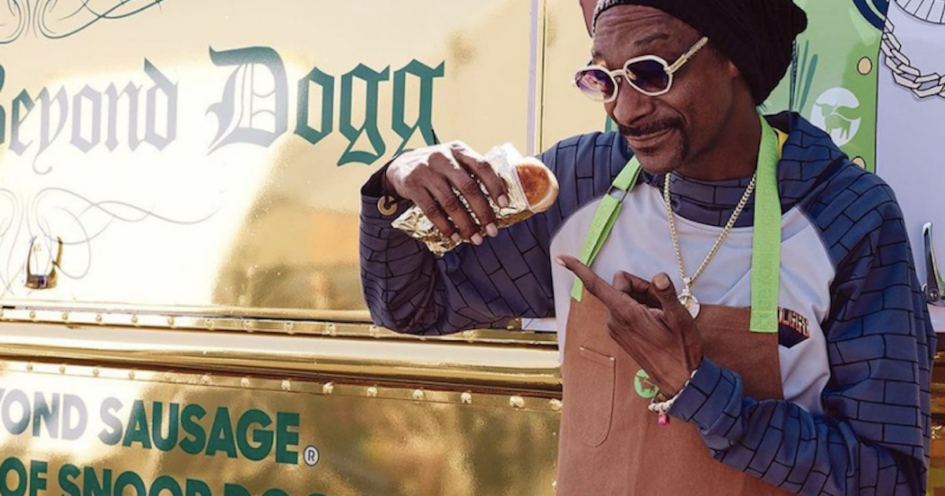 A certain American rap legend-turned-plant-based-ambassador is having a very big birthday this year. Snoop Dogg turns 50 on October 20, and we’re expecting him to celebrate with a Beyond Meat grill out and a fabulous cake made from his bestie Martha Stewart. The famed ‘90s rap icon has continued to top the popular music charts throughout the decades (cue “Drop It Like It’s Hot,” “California Girls,” and basically every other collaboration on his resumé), but intermixed with his music is another kind of partnership: vegan food ambassador. Snoop Dogg (neé Calvin Cordozar Broadus Jr.) has served as the face of several Beyond Meat campaigns, grasping the attention of folks who wouldn’t give a Beyond Burger a chance in normal circumstances. Today, we’re celebrating Snoop. While he’s not vegan (yet), his promotion of vegan-friendly options is pushing fans and consumers in the plant-based direction. Here are seven Snoop stunts to celebrate his 50-year milestone. 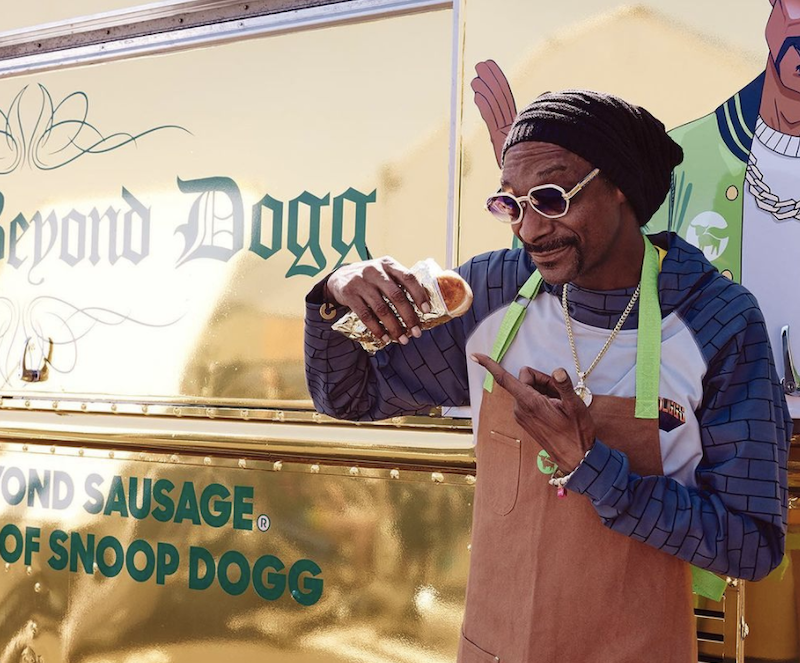 To kick off the 2021 NFL season, Snoop teamed up with Los Angeles Chargers’ Derwin James to hand out over 600 free Beyond Meat burgers and sausages at a pop-up in LA. The two were allowed to design their own food trucks and handholds. Snoop’s Tailgate Dogg was a completely vegan sandwich featuring Beyond Sausage, Beyond Meat chili, non-dairy cheese, and crispy onions on an artisan split-top bun. James went with a double-patty smashburger fused together with vegan cheese and spicy barbecue sauce held between two burger buns. While Snoop won’t be serving his signature sausage any longer, the food trucks continued to pop up at Los Angeles-area high school football games to surprise players and fans with some complimentary and tasty vegan eats.

2 Getting the family on board

Many vegans have learned the hard way that try as they may, they just can’t get their immediate family or closest friends to give vegan a try. Sometimes, a person has to hear it from an outside source … or you have to get a little sneaky. Snoop confessed that he fooled his family by sneaking Beyond Meat products into their food. He knew that once they tried them without bias, they’d realize how meaty plant-based products can really be. It’s no surprise—Snoop was right.

During the height of the coronavirus pandemic in 2020, Snoop chipped in to Beyond Meat’s Feed a Million+ campaign. The goal was to feed over a million frontline workers in 30 days with Beyond Meat burgers. The rapper donated a colossal number of vegan meaty handholds to Martin Luther King Jr. Hospital in Los Angeles last April. 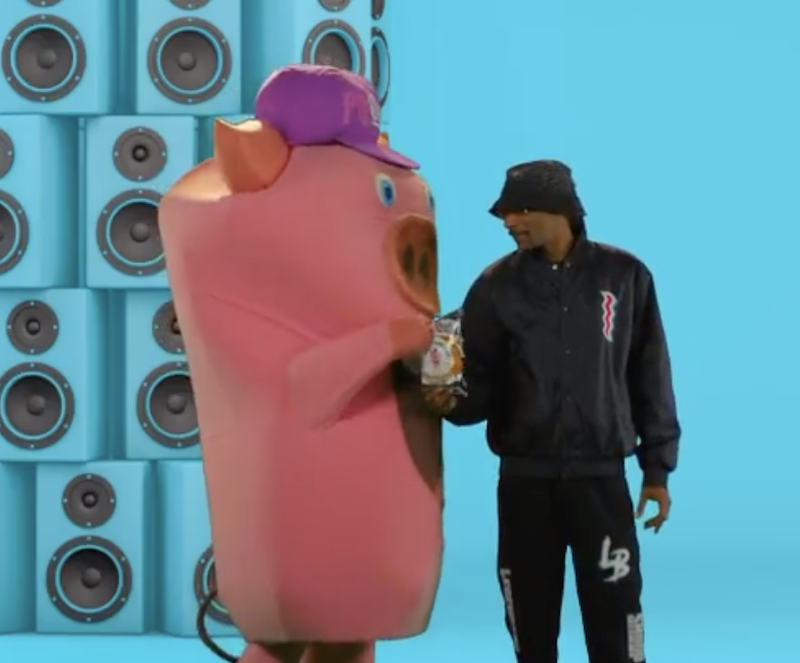 Beyond Meat isn’t the only vegan company Snoop has a stake in. The entertainer has also teamed up with Outstanding Foods—a plant-based pork rind and chip company with significant celebrity backing. In June 2020, Snoop dropped into a Zoom class full of Loyola Marymount University marketing students who were tasked with the project of coming up with campaigns to sell these vegan snacks. Snoop appeared to judge the presentations and pick a winner. The winning group was granted the opportunity to work with Snoop and Outstanding Foods CEO Bill Glasser to turn their pitches into public marketing campaigns, with profits benefiting the essential workers of the pandemic.

Imagine strolling into your local Dunkin’ to order your Medium Regular when you look up to see Snoop Dogg at the register. The celebrity worked at a single Dunkin’ location in November 2019 to bring buzz to the chain’s new Beyond Sausage Sandwich. While not vegan (it contains animal-based egg and cheese), any excitement around a plant-based option is a step forward in our minds. 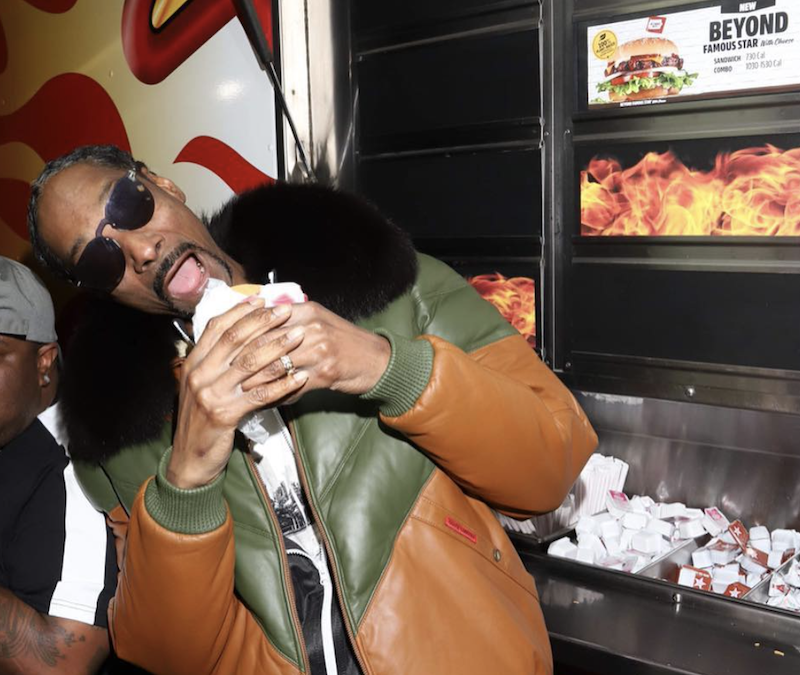 Sure, take this with a grain of salt as one could argue that Snoop’s Puppy Bowl XVII appearance was financially motivated, but we choose to allot him the benefit of the doubt. The entertainer joined the legendary Martha Stewart to host the annual Puppy Bowl in 2020. The televised event runs concurrently with the Super Bowl to feature adoptable pups from animal shelters. Given the popularity of certain purebreds such as Frenchies and Labradoodles, America could all stand to hear “adopt, don’t shop” more often.