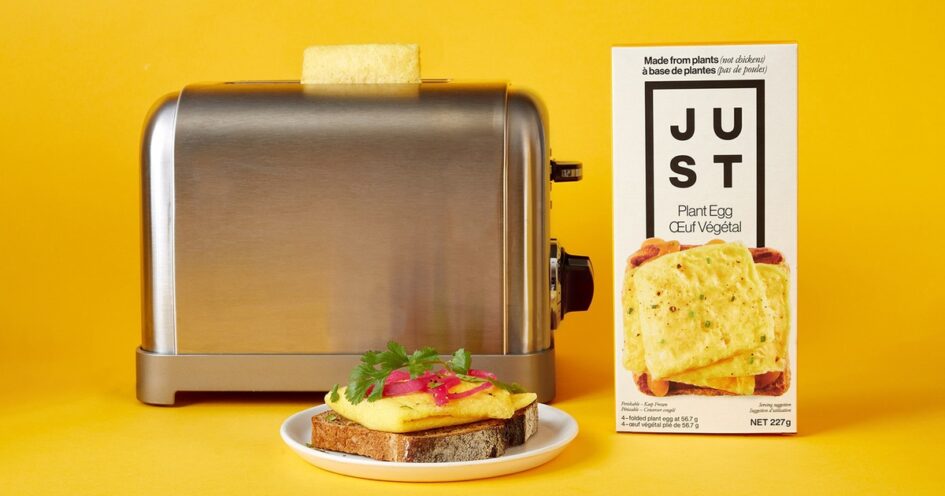 South Africa is about to get a taste of its first vegan egg thanks to a partnership between California-based Eat Just and market platform Infinite Foods. The partnership will bring the folded format of vegan JUST Egg to South Africa by way of retailer Wellness Warehouse and Infinite Foods’ eCommerce site. In stores, the folded JUST Egg will be sold in a box of four in the frozen aisle. The mung bean-based vegan egg will also be available on restaurant menus in greater Cape Town, Johannesburg, and Durban, including at Lexi’s, Jackson’s, and Great Cape Deli.

“Eat Just is an innovative company on the forefront of food technology, making them an amazing partner to help Infinite Foods address the food security, health, and sustainability issues we face in Africa,” Infinite Foods Founder and CEO Michelle Adelman said. “We are excited about the opportunities this partnership creates as it speaks to Infinite Foods’ ethos to create socio-economic sustainability, advance a plant-forward lifestyle, and leverage technology to bring great products to market.” As is the case in many parts of the world, eggs are commonly used in South African cuisine and the average person consumes 7kg (15 pounds) of chicken eggs every year—meaning 160 million chicken eggs are consumed annually in South Africa. While chicken eggs are notoriously high in cholesterol, JUST Egg is made entirely from plants, meaning it does not contain any cholesterol and instead offers a heart-healthy, protein-packed breakfast, lunch, and dinner option. “The biggest individual impact you can make for the planet is the food you choose to eat, and the JUST Egg Folded product allows consumers to do just that,” Adelman said. “With the rapid growth of population in Africa, expected to be at 2.2 billion by 2050, incorporating delicious, nutritious, and sustainable food options into our diets at every meal is more critical than ever.”

In addition to being free from cholesterol, JUST Egg offers environmental benefits. The product’s ingredients use 98 percent less water, 86 percent less land, and produce 93 percent less carbon emissions than conventional eggs. “We are grateful to our team of innovators who bring novel ideas to life that positively impact society and the environment and Infinite Foods is the ideal partner for our expansion into this market,” Eat Just CEO and Co-founder Josh Tetrick said. “They bring invaluable expertise to reach the African consumer and have the value chain to support us in delivering this ground-breaking product to consumers at home and in restaurants.” Eat Just launched its innovative vegan JUST Egg in retail outlets in 2018 in a 12-ounce pourable format created for making scrambles, omelets, quiches, stir-fries, and baking. In April 2020, the company debuted a pre-baked folded JUST Egg. Coffee chains such as Philz and Peet’s have since added to their menus as part of vegan breakfast sandwiches.

A favorite of everyone from basketball star Cade Cunningham (this year’s first NBA draft pick) to musical artist Lizzo, JUST Egg is now available at more than 20,000 retail points of distribution and 1,000 foodservice locations. In addition to South Africa, the folded version of JUST Egg launched in Canada in April at more than 1,000 grocery stores. In South Korea, egg prices recently spiked by 57 percent amid a new avian flu outbreak. JUST Egg is making its way to the country to help it weather egg shortages—which are expected to last through 2022. There, the vegan eggs will be availabe on the menu at popular chains Paris Baguette and Paris Croissant before expanding to retail and e-commerce.

In China, JUST Egg gained some major ground in January when the vegan egg landed on the menu at Dicos, one of the country’s top fast-food chains. Not only did Dicos feature the vegan egg on the menu in five items, but the chain replaced animal-derived chicken eggs with the mung bean-based vegan egg, marking the first time a major fast-food restaurant has swapped an animal-based product with a plant-based one across multiple regular menu offerings.

Over the course of three years since its launch, JUST Egg has sold the vegan equivalent of 100 million chicken eggs.