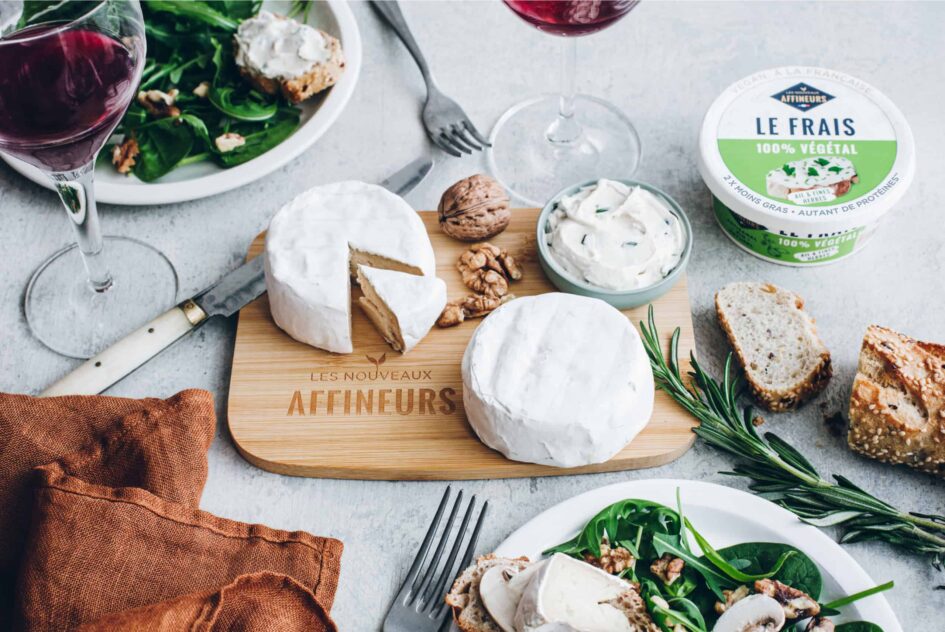 The French specialist of fermented plant-based cheese will attend the Plant Based World Expo of London on October 15th and 16th.

Committed to providing sustainable, creative foods through an innovative, 100% natural, plant-based approach, the French start-up set out to create cheese alternatives with no compromise on taste or quality when it was founded in 2017. The venture is a triumph, as demonstrated by the approval of its delicious Frais and Affinés ranges by the greatest chefs and selective gourmets.

Ramping up and spreading out

To share its delicious creations with as many people as possible, Les Nouveaux Affineurs is now beginning a new step of its commercial development. The objective? To ramp up its international expansion just a few months after opening its own production facility. Indeed, the pilot plant – established on the outskirts of Paris since April 2021 – has brought about a radical change of scale. This site is resolutely like none other in Europe, and it features a R&D laboratory. Les Nouveaux Affineurs is not about to stop such a positive trajectory: it has its sights set on satisfying the cravings of cheese lovers everywhere who seek flavourful, certified organic plant-based alternatives!

The Plant Based World Expo: an obvious choice

Based on its new production capacities, the French start-up is set to roll out its multi-channel distribution strategy throughout France and abroad, where the demand for plant-based cheese alternatives is increasing. For  (LinkedIn), the founder of Les Nouveaux Affineurs, participating in the Plant Based World Expo 2021 – a global trade fair entirely reserved for 100% plant-based products – is an obvious choice. “This is a unique opportunity to meet and mingle with the international leaders in plant-based alternatives, and to share our concerns and our visions with them,” he explains. “The PBWE is also a great place to meet our future export partners. We will be attending as proud representatives of French savoir-faire.” This one-of-a-kind event, created to showcase the power of plants, will be held in London on October 15th and 16th this year.

What do “Frais” and “Affinés” mean?

Each creation by Les Nouveaux Affineurs has the shortest possible list of ingredients. The Affinés range adapts the expertise of French artisan cheesemakers to products that fit perfectly on the finest gourmet cheese plate. The Frais range features light, creamy products perfect as spreads or for use in cookery, either in sweet or savoury dishes. For both ranges, Les Nouveaux Affineurs’ secret is their scientific expertise on plant-based fermentation. The products quickly won over gourmets and Michelin starred restaurants alike, from Shangri-La to Le Pavillon Ledoyen!

Innovation, internationalisation, new collaborations: with Les Nouveaux Affineurs, the plant-based version of gourmet French food is just getting started making its way around the world and thrilling epicureans everywhere.

Les Nouveaux Affineurs is reachable at