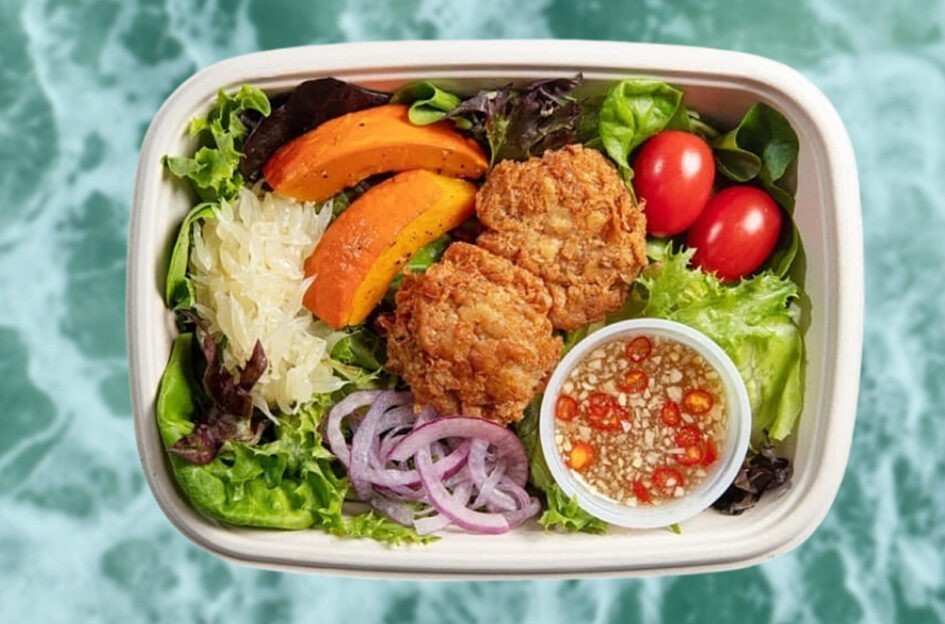 Starbucks is quickly becoming one of the world’s plant-based leaders following years of falling short of dairy-free and meatless menu options. In recent years, the international coffeehouse introduced Impossible sausage, Oatly oat milk, and other innovative menu items at stores worldwide. Now, the company just announced that it will dive into the world of vegan seafood. Starbucks partnered with OmniFoods to begin featuring vegan crab cakes at 170 Hong Kong locations, marking the first time the coffee chain has offered plant-based seafood.

The company revealed that it will begin offering a Thai Style New Crab Cake Salad at the Hong Kong locations, showcasing OmniFoods’ innovative vegan crab cake complete with mixed lettuce, pumpkin, tomato, fresh pomelo pulp, and a salad dressing made with fish sauce served on the side. The fish sauce salad dressing can be omitted to make the meal completely vegan.

“We are thrilled to have Starbucks Hong Kong to be one of our first OmniSeafood launch partners,” OmniFoods’ founder David Yeung said in a statement. “Besides the exciting menu item we are introducing, we trust this is the beginning of raising awareness that ocean preservation and reduction of seafood consumption should be high on everyone’s agenda in terms of combating climate change and ensuring food security for the planet.”

OmniFoods currently offers the Omni Classic Fillet, the Omni Folden Fillet, Omni Tuna, and the Omni Ocean Burger alongside the new plant-based crab cake. Starbucks’ partnership with OmniFoods signifies the coffee giant’s shift towards sustainability and its attempt to cater to the growing plant-based consumer base. The move mirrors Yeung’s sentiment and upholds Stabuck’s promise to lower its carbon footprint worldwide.

“We cannot tackle climate change without addressing the destruction of our oceans,” Yeung said. “Overfishing and bottom trawling devastate our marine ecosystems. While conventional seafood accounts for 17 percent of animal-based protein sales in the U.S., plant-based seafood only accounts for less than 1 percent of the entire plant-based protein market in the U.S. This is why, since the launch of OmniPork in 2018, Green Monday [OmniFoods’ parent company]  has started focusing on seafood. The OmniSeafood series promises to not only wow taste buds, but also to awaken our consciousness toward our oceans.”

Within the United States, the company is working to develop new, dairy-free specialty beverages. Following its incorporation of Oatly, the coffee chain currently offers four plant-based milk options including coconut, soy, almond, and oat. The company just announced that it will introduce its first-ever vegan holiday beverage with the Iced Sugar Cookie Almondmilk Latte, featuring a vegan sugar cookie flavored syrup topped with a red and green cookie sprinkle.

“Starbucks customers continue to look for new ways to enjoy plant-based options and customize their Starbucks Experience, and we are delighted to introduce the new holiday menu featuring our first non-dairy, holiday coffee beverage,” a Starbucks spokesperson told VegNews.