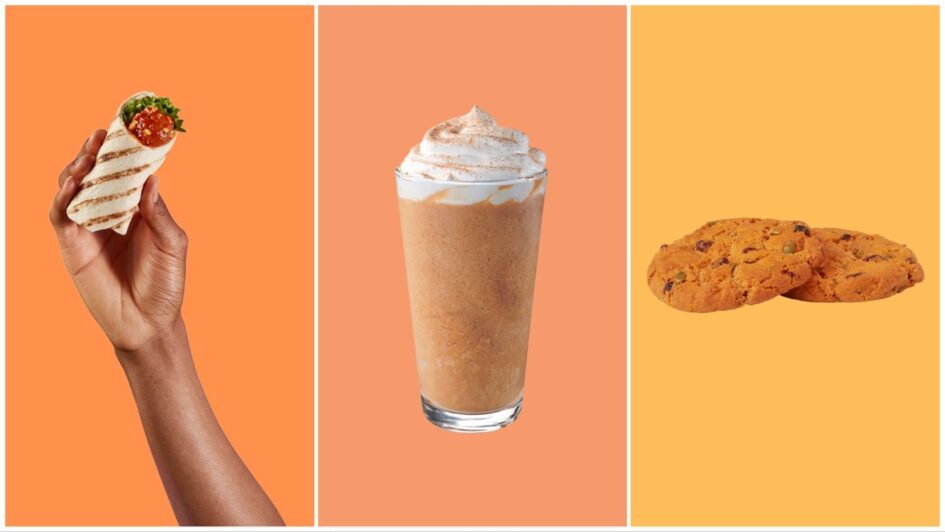 Put the barbecues away. It’s time to embrace a season change. Starbucks UK has announced the beginning of pumpkin spice everything with its autumn menu reveal.

The coffee giant is bringing back its iconic Pumpkin Spice Latte and Pumpkin Spice Frappuccino Blended Beverage. Both can easily be made vegan by requesting dairy-free milk and the brand’s Vegan Whipped Topping, which landed on UK menus for the first time last year.

If that’s not quite enough pumpkin, there’s also a vegan Pumpkin Spice Cookie, which comes topped with pumpkin seeds (naturally) and cranberries.

But the brand’s new autumn food menu is even more notable than its Pumpkin Spice additions. In keeping with Starbucks’ sustainability commitments, all of the new additions are meat-free and one is 100 percent vegan: the No’Meatball Marinara Wrap.

Starbucks’ new menu is a reflection of its wider commitment to sustainability.

As the world’s biggest coffee chain, Starbucks’ impact on the environment is significant. Early last year, it announced its intentions to cut waste and carbon emissions in half by 2030.

Among other actions (like unveiling reusable packaging and investing in reforestation), the chain acknowledged that expanding its plant-based food range was key to becoming more environmentally friendly. Since then, the Seattle-based company has added several new vegan options to stores around the world. It even turned one store 100 percent plant-based for a trial period earlier this year.

Starbucks is also aware that customers want to see more plant-based options on its menus. CEO Kevin Johnson stated earlier this year: “If I think about both beverage and food, the number one trend that I would highlight there is just the consumer shift and consumer preferences around plant-based.”

The Starbucks autumn menu is limited edition and available at all of its UK locations starting September 2.

The 16 Best Vegan Pumpkin Spice Products To Try This Fall