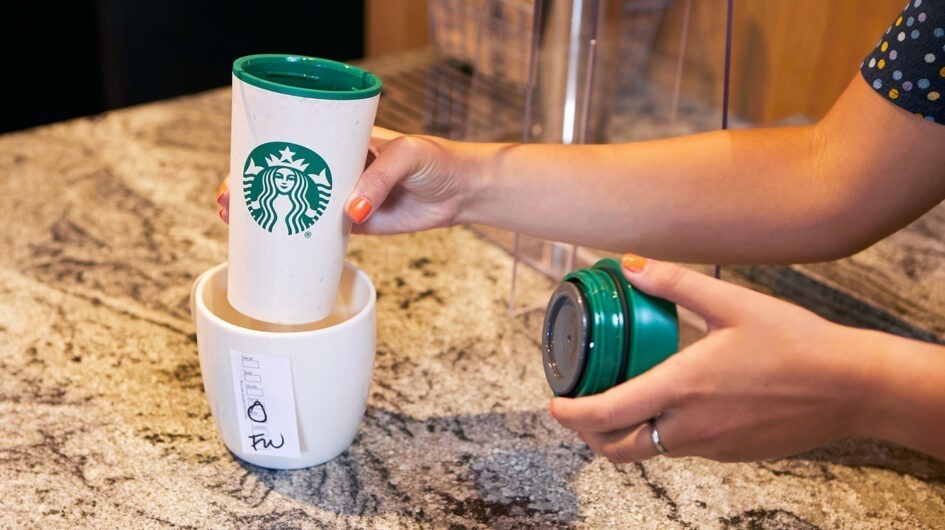 A Shanghai Starbucks is taking sustainability to the next level.

The chain expanded its “Greener Store” concept internationally, opening its first location outside of North America on September 30. Located in the Pudong district, the new Starbucks embraces a circular design approach, which aims to tackle issues like climate change and pollution.

At the new Shanghai store, oat milk is the default lieu of dairy due to the high levels of greenhouse gas emissions generated by cattle. And more than half of the store’s menu features plant-based products, including 15 all-new food items.

The “greener” Starbucks is also completely paperless, and instead digital menus and receipts are given. It offers only reusable cups, which can be purchased if customers do not have their own, and coffee grounds are composted or recycled. The iconic green apron is made from recycled plastic cups. And the store even boasts a “Circular Lifestyle Lab,” which spotlights sustainability-themed artwork.

The store’s eco-friendly aspects don’t stop there. Its design and construction implement the use of many recycled materials, including wood reclaimed from other Starbucks stores.

Of its nearly 10,000 stores in the U.S. and Canada, more than 2,300 are Greener Stores, a concept the coffee giant co-developed with the World Wildlife Fund (WWF).

Greener Stores run on renewable energy and use high efficiency light fixtures, features that the Shanghai Starbucks also includes. According to Starbucks, the stores are able to decrease their overall energy and water use by 25 to 30 percent, which will save the company approximately $50 million in utilities over the next decade.

In 2018, the company committed to opening 10,000 Greener Stores around the world by 2025. “We know that designing and building green stores is not only responsible, it is cost-effective as well,” Kevin Johnson, president and CEO of Starbucks, said.

That same year, the chain was responsible for emitting about 16 million tons of carbon dioxide. It used 1 billion cubic meters of water and sent more than 800 metric kilotons of waste, such as coffee cups, to the landfill. In order to tackle these environmental concerns, Starbucks committed to reducing its carbon emissions, water usage, and generated waste by 50 percent by 2030.

The Greener Stores are part of Starbucks’ strategy for becoming resource positive. “Starbucks expansion of the Greener Stores program demonstrates a continued commitment to environmental stewardship and innovation,” Sheila Bonini, Senior Vice President, Private Sector Engagement of the WWF, said. “By making this program open-source, and expanding it globally, Starbucks is creating a path toward a resource positive future within their own four walls and beyond.”