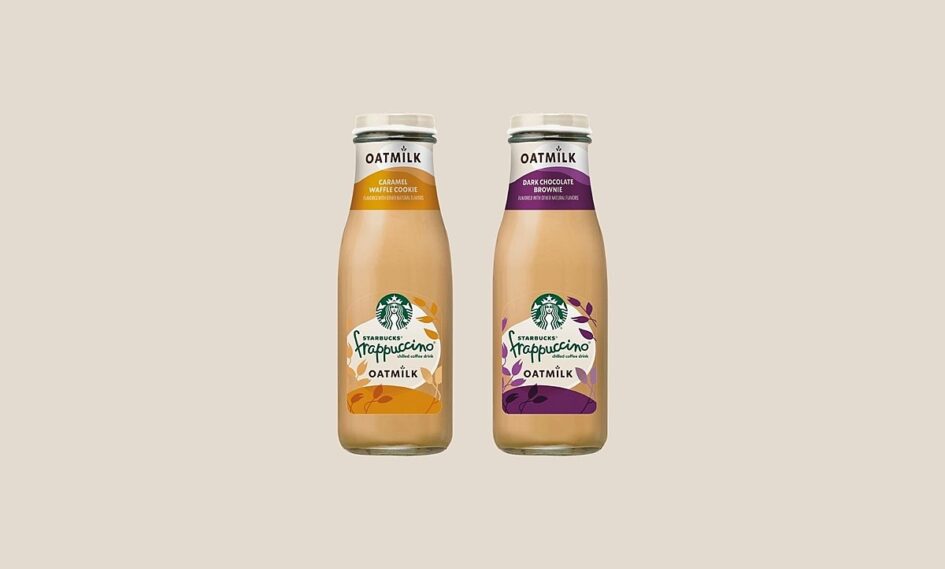 Starbucks revolutionized the coffee world when it brought its signature beverages and specialty drinks to customers worldwide, but when it comes to plant-based change, the company is playing catch up. The international coffee company recently readjusted its product platform, putting plant-based and dairy-free menu development at the forefront. Now, Starbucks has announced that it is launching its first oat milk-based bottled Frappuccinos, reinventing the iconic ready-to-drink specialty to be dairy-free.

While the in-store Frappuccinos a fan-favorites for loyal Starbucks’ clientele, the bottled variation is equally as recognizable. This new recipe will mark the first time that the company has focused on making its ready-to-go category vegan. The brand new Starbucks Frappuccino with Oatmilk products will feature two distinct flavors: Dark Chocolate Brownie and Caramel Waffle Cookie. The two flavors will be exclusive to the Oatmilk variety.

“Starbucks has been a leader in the ready-to-drink coffee category since 1994 and we continue to focus on beverage innovation with the highest quality coffee and ingredients,” Vice President of Channel Development Americas at Starbucks Chanda Beppu said in a statement. “This year, we’re excited to provide customers with their favorite ready-to-drink Starbucks beverages in new flavors and formats, like Starbucks Cold & Crafted on Tap and the new Starbucks Frappuccino with Oatmilk.”

Alongside the oat milk Frappuccinos, Starbucks unveiled a bottled cold brew made with oat milk. The Starbucks Multi-serve Cold Brew will be available in a Dark Chocolate flavor. The new oat milk drinks will be available in retailers, grocery stores, convenience stores, and gas stations throughout this next year, and mark a greater beverage release from Starbucks. The company announced that it will be entering the energy drink category, launching Starbucks’ BAYA energy, new energy drinks which contain natural energy and caffeine from coffee fruit, developed to boost nutrients and antioxidants.

“We’re thrilled to introduce Starbucks BAYA Energy to our customers, providing them with a refreshing, fruit-flavored boost of feel-good energy, in a way only Starbucks can deliver,”  Beppu said. “Over the years, we’ve continued to identify new and exciting ways to expand our ready-to-drink portfolio and saw an opportunity to complement our existing coffee beverage lineup with Starbucks BAYA Energy, the brand’s first beverage to launch in the energy category.

Although Starbucks has been slower to develop items in plant-based categories, the company consistently proves that it aims to cater to its plant-based and dairy-free customers. Early last year, Starbucks CEO Kevin Johnson declared that the company will experience a dominant shift to plant-based products as consumers’ interest leans towards more sustainable and healthier options.

While the company offers four different kinds of plant-based milk and several dairy-free specialty drinks, customers still pay a surcharge for dairy-free milk at most locations. A fake press release from the non-profit Switch4Good claimed that Starbucks planned to reverse the surcharge. Following the company’s official statement debunking the false press release, Starbucks announced that it would remove the dairy-free milk surcharge at 1,000 locations as a trial period.

Starbucks customers want oat milk, and despite the surcharge, have purchased a record amount. In April of 2021, the coffee company faced an oat milk shortage after a matter of weeks. The oat milk popularity is helping the company reach its sustainability goals, hoping to cut down carbon emissions by 50 percent by 2030. Oat milk production produces 80 percent less greenhouse gas emissions and uses 60 percent less energy than cow milk production.

For more on eating and drinking plant-based at Starbucks, visit our guide to everything vegan at the coffee shop.