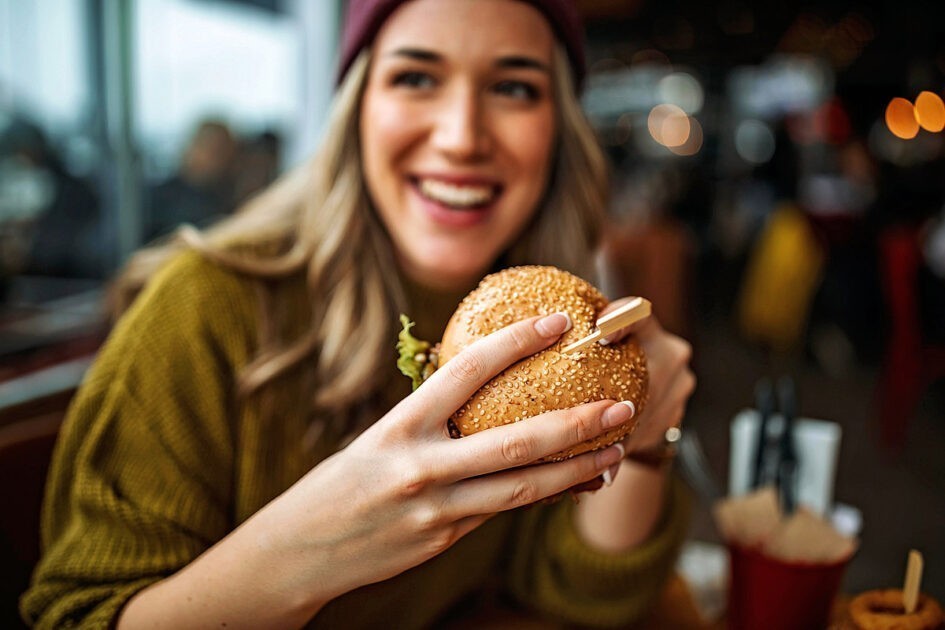 Attention all flexitarians or plant-based meat fans. You may be on the right track. A new study finds that eating plant-based meats five times a week is enough to improve your gut health and tilt the balance of bacteria in your body from “unhealthy” to “healthy,” which in turn helps prevent disease.

If you’re a hardcore wholefood herbivore who prides yourself in making home-prepped, colorful meals full of vegetables and whole grains, or legumes – and never touch those store-bought meatless alternatives – you likely turn your nose up at the fake meats out there. But before you dismiss the value of pea-based patties, it turns out that they may have some powerful health benefits for people who would otherwise be eating red meat.

These plant-based meat brands like Beyond, Impossible, and others often get a bad rap from both meat-eaters (who point to the long list of added ingredients) and health-conscious vegans (who says they would rather eat whole foods, thank you) for being ultra-processed, equally high in saturated fat as the real thing, or using genetically modified ingredients to recreate the taste and texture of meat. If ‘eat real food’ is your mantra, then chances are you are avoiding them.

A new study has found that swapping just five meat-centric meals a week for plant-based alternatives has the surprising effect of benefiting your gut bacteria – in just four weeks. This is encouraging news for anyone who considers themselves a flexitarian or who is gradually trying to transition to a more plant-based approach for their health, the environment, or ethical reasons.

The researchers who conducted the study, published in the journal Foods, witnessed beneficial changes in the microbiome that previous health research suggests may help to prevent obesity, cardiovascular disease, diabetes, and inflammatory bowel disease among other conditions related to inflammation and gut health.

The study sheds new light on the health profile of plant-based meat alternatives and whether we should regard them as ultra-processed foods or as a better choice than actual meat.

When asked for advice for anyone considering a flexitarian diet, or who is trying to eat less meat but enjoys the plant-based meat alternatives on the market, Toribio-Mateas answered: “I would say that there’s a whole health halo or lack thereof around many products.”

“The kind of PBMAs included in the study were convenience products that can make people’s lives easier,” he told The Beet in an exclusive email interview. “I wouldn’t recommend that people eat them at every meal every day, but I would hope that those who read the study understand that even food that’s seen by many as ultra-processed can be okay for your microbiome.”

“On that basis, Toribio-Mateas added, “I hope these people relax a little because we are very anxious around food, and we need to focus on enjoying it instead of overanalyzing it.”

He adds that the best diet is one that is full of whole plant-based foods, but these popular meat alternatives can be a step towards that, and produce better gut health. “We all start from a different point, and that has a huge impact on the ability of microbes to colonize a person’s gut.”

The study was a relatively small randomized controlled trial involving 40 participants with no underlying health conditions. Half of the participants had plant-based meat alternatives (PBMA) delivered to them in a ‘real world’ flexitarian scenario of being able to choose how many meals to swap themselves. The scientists analyzed stool samples before and after the four-week intervention to see if their microbiome had changed.

On average, participants ate five PBMA per week and this increased their fiber intake by 18.98 grams. Compared to the control group who ate their usual diet, the 20 participants who ate PBMA’s had an increase in the pathways that produce a short-chain fatty acid (SCFA) called butyrate.

Our gut microbes ferment fiber in foods to produce short-chain fatty acids (SCFAs). These are fatty acids with fewer than 6 carbon atoms that get produced when the “good” gut bacteria ferment fiber in the colon. One particular SCFA, butyrate, plays a critical role in boosting health and fighting disease.

Butyrate is the main energy source for cells in the colon, keeping the gut lining and bowels healthy and preventing inflammation. Furthermore, research indicates that adequate production of butyrate regulates body weight and energy, prevents obesity, diabetes, and fatty liver, and boosts the immune system.

A plant-based diet rich in legumes, vegetables, and whole grains provides the soluble and insoluble fiber that the gut bacteria need to make this hugely beneficial SCFA. The PBMA products in the study provided contained a range of soluble and insoluble fibers from chicory root, carrot, pea, and potato. In addition, the phytonutrients in pea protein and pea flour which were the base ingredients of the PBMAs, modulate the gut microbiome and help the production of short-chain fatty acids, commented the authors.

Are plant-based meats ultra-processed or healthy?

As a nation, we eat too many ultra-processed foods and they contribute a shocking two-thirds of children’s diets. Health experts such as the American College of Cardiology warn us that each additional serving of ultra-processed foods increases the risk of cardiovascular mortality by nine percent.

The NOVA classification by the Food and Agriculture Organization of the United Nations defines ultra-processed foods as formulations of ingredients created by a series of industrial techniques and processes. This usually means using cheap high-yield ingredients such as corn and wheat, adding sugars, fats, additives, and colorings, and molding and pre-frying into likable and addictive products.

Although some manufacturers use these processes to make plant-based meat alternatives, the authors of the new study argue that the mere industrial processing of ingredients of vegetable origin does not make the resulting plant-based meat alternative fall into the category of “ultra-processed” foods that are full of added sugar or other ingredients that hurt gut health.

What about saturated fats in fake meat?

The ingredients in fake meat products vary widely according to brand, and some contain higher amounts of saturated fats, salt, and added sugar than others, or than meat products. The plant-based burgers, sausages, meatballs, and mince that the scientists used in the new study were mostly made of pea protein but some products included rice and soy protein, and their saturated fat (from coconut oil) ranged from 11.9 grams to 14.8 grams per 100 grams.

The American Heart Association recommends we limit sat fat to no more than 13 grams a day, based on a diet of 2,000 calories. However, if you’re swapping out a regular burger for a plant-based alternative, you will probably be reducing your overall sat fat, and some experts suggest that although coconut oil raises LDL (so-called “bad”) cholesterol, it also boosts beneficial HDL (good cholesterol) and may be heart-protective if part of a balanced diet.

Toribio-Mateas cautioned against extrapolating more from the study, other than to say: “The science points to the benefits of fruit, veg, wholegrains, pulses, etc., but it’s still on the fence as to whether going fully vegan is substantially better. This could be because we’re lacking long studies that follow participants for many months, or even years, rather than weeks, and that compare omnivore with vegan cohorts on that basis, with gender, age, BMI, etc. matched.”

Toribio-Mateas promises that more research will be forthcoming from the “Bowels & Brains Lab,” which he co-created with senior food scientist Adri Bester, academic lead of the London Agri-Food Innovation Clinic (LAFIC).

Swapping meat products for plant-based meat alternatives five times a week could boost your gut bacteria, help you maintain a healthy weight, and help lower the risk of chronic diseases such as diabetes and cardiovascular disease.

If you’re transitioning to more plant-based with a flexitarian approach, include fiber-rich vegetables at each meal, and don’t be scared of including some healthy plant-based burgers and sausages!