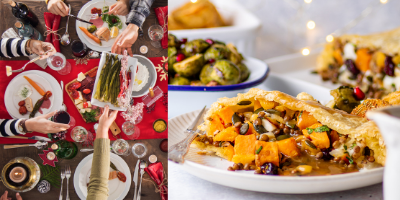 A survey from one of the largest vegan groups in the UK reveals what vegans will be eating this Christmas.

Vegan Food UK recently created a poll to see what everyone is having as a main on Christmas day. 1001 people answered which vegan alternative they would have, and there were three clear favourites.

The winning vegan centrepiece this year is a vegan turkey alternative. It gathered a massive 296 votes and people were excited to share which turkey alternatives they’re having this year. One member saying ‘I used to get a tofurkey joint but last year I got ASDA’s chicken-style roast and it was amazing’

The second favourite was the vegan wellington. There is now an abundance of these in supermarkets, so it’s no surprise that this received 280 votes from the members. Someone even commented that they will be making their own ‘Vegan Haggis Wellington‘!

In third place was the traditional vegan option of a nut roast. A nut roast isn’t made with any alternative meat but instead a blend of nuts, vegetables and herbs. One member even has a ’16 year perfected nut roast’.

There are countless options for Vegans this year from frozen centrepieces to ingredients to make your own, nobody will be stuck for choice.

What will your centrepiece be this year?