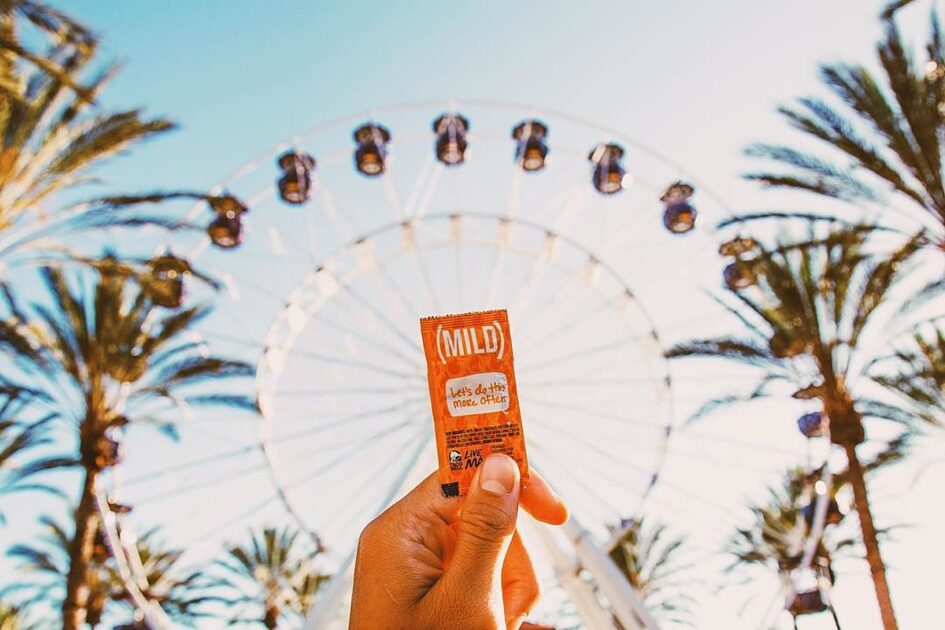 Taco Bell’s disposable, bite-sized hot sauce packages represent one of the fast-food chain’s most iconic symbols. While recognizable, these packets also amount to loads of waste every day, so Taco Bell is striving for a more sustainable solution. The company just announced plans to curb its hot sauce waste problem, which amounts to an estimated 8.2 billion single-use packets ending up in landfills per year. Recently, the vegan-friendly fast-food chain announced that it would be partnering with recycling leader TerraCycle to prevent this excessive waste and ensure that the signature packets get recycled.

“As simple as it sounds, it’s important to remember to first reduce our consumption habits, then reuse products wherever possible, and then recycle,” Taco Bell’s Director of Global Nutrition & Sustainability Missy Schaaphok said. “We’re excited that TerraCycle has provided a way for us to extend the life cycle of our iconic sauce packets as we reevaluate the rest of our packaging suite.”

The Mexican-inspired chain uses flexible firm materials to create the iconic hot sauce packages, allowing the packets to be easily reused and reformed into something else. TerraCycle will work with Taco bell to recycle the hot sauce packets nationwide, hoping to set a precedent for the entire fast-food industry. The move will mark one of the first times a major fast-food corporation has teamed up with a recycling campaign.

Customer involvement will be critical for the recycling campaign so Taco Bell is increasing its advertising to promote this sustainable initiative. The company is currently setting up advertisements at its in-store cashiers and drive-thrus to encourage its patrons to recycle the sauce packets when finished with their Taco Bell meals. The customers will need to collect the finished packets, set up an account with TerraCycle, and then ship them to the company where the used packets will be melted into plastic for recycled material-based products.

“Since our founding, TerraCycle has made it our mission to ‘Eliminate the Idea of Waste’ and provide solutions for items that are not traditionally recyclable curbside,” TerraCycle CEO and Founder Tom Szaky said. “This first-of-its-kind recycling program not only highlights the forward-thinking nature of Taco Bell but also marks a huge step forward for the quick service industry on its journey towards more sustainable business practices.”

Taco Bell launched a sustainability initiative that promised the company would replace all of its consumer-facing packagings with completely reusable, recyclable, or compostable alternatives by 2025. The fast-food chain is recently taking leaps in sustainability measures, leading the industry toward more environmentally-conscious practices.

Beyond the recent recycling campaign, Taco Bell has led the fast-food industry in plant-based options for decades. The company’s menu is notably vegan and vegetarian-friendly, allowing customers to substitute animal products out of most of the menu. Now, Taco Bell is enhancing its plant-based menu to bring consumers more options that extend beyond the iconic customizable menu. Earlier this year, the company’s parent company, Yum! Brands, announced a partnership with Beyond Meat. The partnership is expected to introduce plant-based protein to locations nationwide.

In April, Taco officially began testing Beyond Meat at select locations in Southern California. The inaugural plant-based protein gave consumers the option to not just opt for beans, but to eat familiar favorites with a fully plant-based protein alternative. The company rolled out a limited edition Cravetarian Taco complete with only plant-based ingredients.

The plant-based innovation continued when the company debuted its first vegan Chalupa shell. In June, Taco Bell released the Naked Chalupa with a Crispy Plant-Based Shell at one location in Irvine, California. The company’s test kitchen spent months developing a plant-based chicken that would bring its customers the classic chalupa menu staple without any of the animal products typically involved.

“At Taco Bell, we’re pushing the limits of what people have known vegetarian and vegan items to look like within the quick-service restaurant industry,” Missy Schaaphok told VegNews this summer. “No matter one’s lifestyle, everyone should have access to delicious and crabapple food, whether that’s in the shape of our iconic Chalupa shell or in a way that we have yet to introduce.”

For now, check out what is vegan at Taco Bell locations nationwide, including what is not on the menu, with The Beet’s guide to eating plant-based at the fast-food chain.