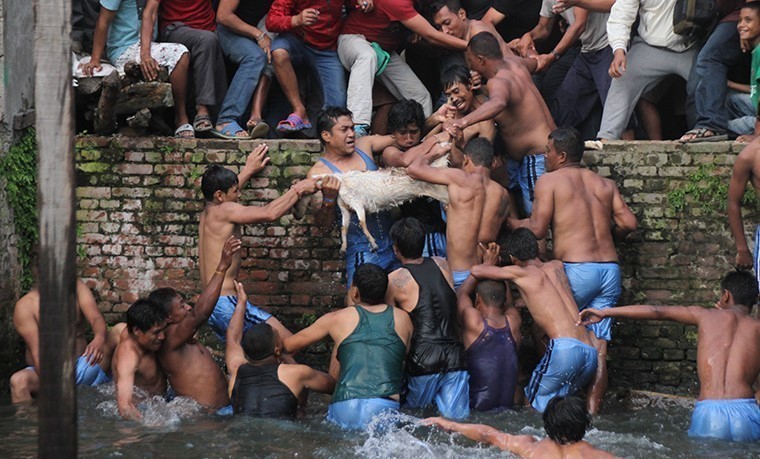 The town of Khokana in Nepal celebrates an annual festival called ‘Deopokhari’ every August a day after ‘Gai Jatra’. The main ritual, supposed to be a part of their 900 year old tradition, involves subjecting a baby (virgin) female goat to prolonged torture to appease ‘an angry supernatural’ who is believed to live in the Deopokhari pond.

The tradition, which started around the 12th century, is based on folklore. The pond, situated in the premises of Rudrayani temple in Khokana, has seen several slip-and-fall accidents resulting in death of people who visit the temple. This gave rise to the superstition of a demon residing in the pond.

ALSO READ: Horses’ Horror: Do Equestrian Events Have a Place in Modern Sports?

Every year, nine village men are selected to participate in this horrifying festival. A huge crowd gathers to watch a young man jumping in the pond with a baby she-goat trying to drown it, while other men join in, biting and ripping the animal apart with bare hands.

Once the sacrificial ritual ends, a competition begins for the possession of the animal’s body. A tug-of-war with the body ensues and is reported to last over 40 minutes.

This inhumane, barbaric practice has been termed “Khokana’s pride” by the organizing committee. The “hero” from the event who brings the ‘honorable fatality’ upon the goat is rewarded to lead the celebratory ‘Shinkali’ dance.

This festival is another example of the many Nepali animal sacrificial rituals that cause a lot of suffering to innocent animals.

Animal Recovery Mission, a not-for-profit organization, has undertaken multiple investigations on this festival around Nepal. In association with the Government, it is trying to eliminate the use of animals in traditions and ceremonies by introducing strong animal protection laws and evolving traditions.

To support the end of such inhumane ceremonies, contact official departments and agencies in Nepal and voice your concern. The letters sent would just help bring this issue to their attention and put an end to it. Let’s unite in putting this behind us, because like civilizations, rituals should also evolve with time.