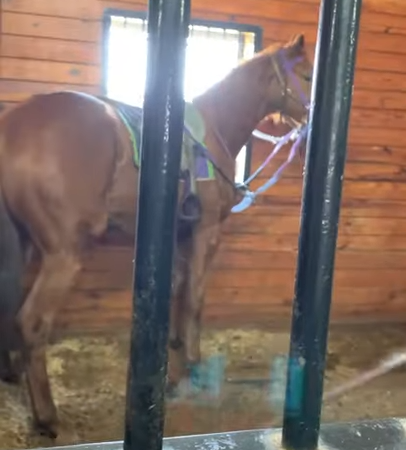 This filly was just 2 years old when racehorse trainer Amber Cobb did this to her:

PETA obtained the footage above through an open-records request to racing officials. In the video, Cobb is seen screaming at, cursing, and hitting the young Thoroughbred with a plastic pitchfork while the horse was tied to the back of a stall at a farm in New Jersey earlier this year. Cobb’s actions frightened the horse so badly that while she was trying to escape, she flipped over and came down hard on the floor. Cobb left her flipped upside down and tied to the wall, until finally jockey Jaime Rodriguez entered the stall to untie her.

You would think that Cobb’s racing license would have immediately and permanently been revoked for her actions, but that didn’t happen. The Delaware Thoroughbred Racing Commission (DTRC) and Pennsylvania State Horse Racing Commission suspended it for just two months. (These commissions were involved because she races in Delaware and Pennsylvania.) She was also ordered to attend anger management classes. This punishment is neither commensurate with the abuse nor a sufficient deterrent to prevent horses from enduring such reckless and dangerous behavior. The excessive punishment inflicted on the filly, delivered by an enraged trainer, is a cruelty issue that transcends a simple rules violation and is a stain on the “sport.”

Cobb must be permanently banned from horse racing.

She has a history of violations, including in 2020 when she was fined $500 for having filled syringes with medication. In 2018, she also had an “altercation” in a public area at Finger Lakes Gaming & Racetrack in New York and was fined $200.

In addition, a former employee testified at her DTRC hearing that Cobb punished a horse by withholding food for days.

Anyone who abuses a horse and demonstrates a clear disregard for horse racing rules should not be allowed to race, train, or own horses. Please join PETA in calling for all racing commissions to protect horses like this filly and ban this trainer.