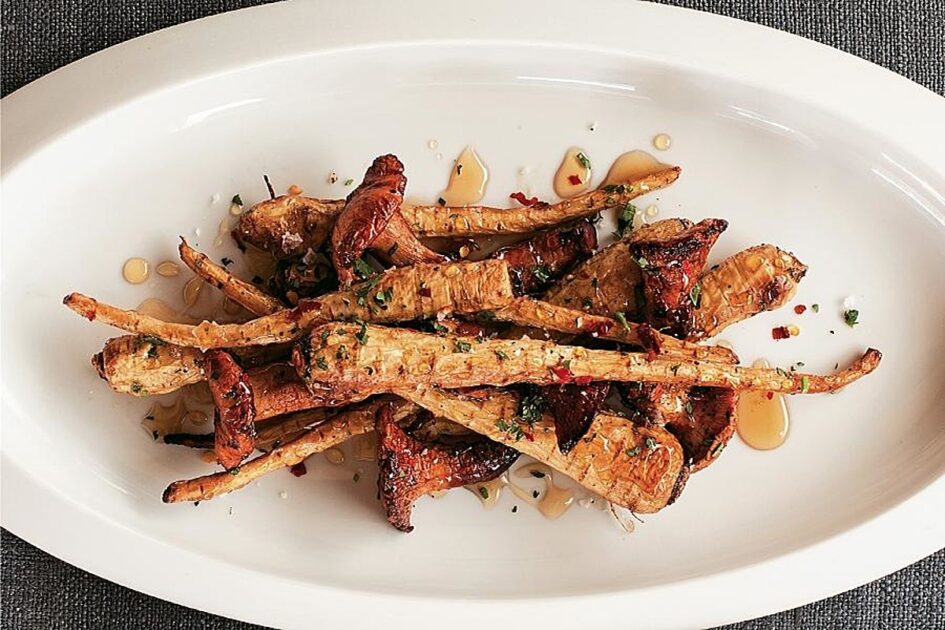 As a full-time foodie, I could not resist connecting with the chef at one of my favorite Los Angels restaurants, Crossroads Kitchen. Tal Ronnen who is the executive chef at the celebrity-go-to restaurant knew exactly what he was cooking up for Thanksgiving and replied, “These are really yummy,’ and sent over an exclusive Crossroads Kitchen cookbook recipe, Roasted Baby Parsnips with Sherry Maple Glaze and Chanterelles (say that five times fast). These thickly cut vegetables are coated in a sweet, sinful glaze and are this year’s side dish that is sure to get devoured in less than five minutes, so triple the recipe!

Chef’s Note: “Baby parsnips are so tender that you don’t even need to peel them. (And if you did, there wouldn’t be many vegetables left!) Parsnips have a sharp flavor reminiscent of parsley’s and become incredibly sweet when roasted. Here they are drizzled with a glaze of maple syrup, a pinch of red pepper flakes for heat, and a splash of vinegar. Chanterelle mushrooms don’t come cheap, but they add a woodsy flavor to this winter dish.”

Fall in a Bowl: Brown Rice With Maple-Roasted Parsnips and Shallots

Veg Out 511: Anna Pippus talks about The Vegan Family Cookbook