Thanksgiving: The Scary Truth Behind The Holiday That You Need To Know About 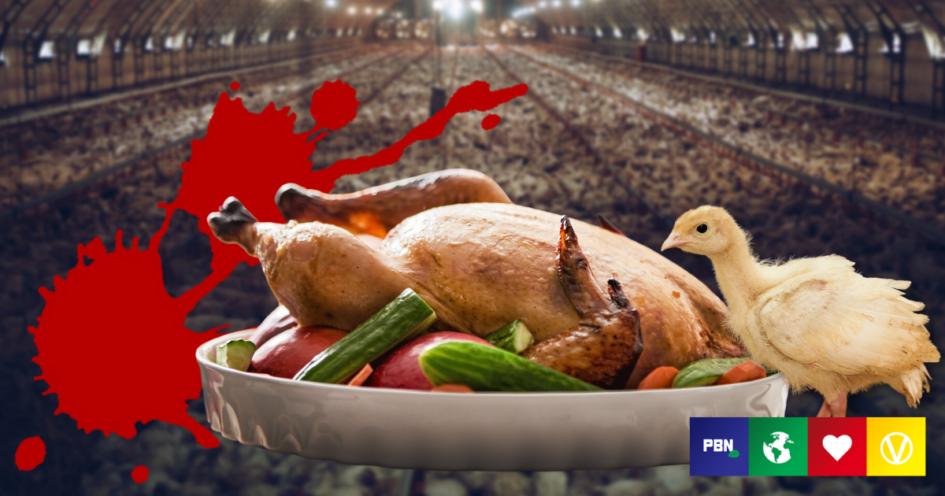 Thanksgiving has arrived in the US. For many people, it marks a time to be grateful for loved ones and thankful for freedom in a tradition spanning centuries. For others, it is a day of mourning – a time to reflect on the pain inflicted on their Indigenous ancestors.

Thanksgiving day typically involves serving up a holiday feast fit for a king. But for the estimated 45 million turkeys killed each year as part of the celebration, there is little to be grateful for. And that’s because many of these birds live a miserable existence, owing to the wrath of factory farming.

How a Thanksgiving turkey spends their life

These 45 million turkeys are part of a staggering 240 million slaughtered throughout the year, every year. And that’s just in the US.

They spend their days in cramped conditions, robbed of their ability to express natural behaviors such as taking dust baths, building nests, and forming long-lasting connections. Turkeys are inherently social animals, and enjoy the company of other species, including humans, according to animal welfare organization FOUR PAWS.

They are highly intelligent, playful, inquisitive and enjoy exploring, the charity adds, and can recognize one another by their voices.

Wild turkeys are “fiercely loyal” to one another, Scientific American writes. Mother turkeys raise their chicks for five months, and when they’re older, they break off into sibling groups that stay together for life.

But for turkeys in the food system, life is very different.

The suffering starts at birth. For baby turkeys (called poults), this involves having their toes and parts of their beaks cut off by workers, as revealed in an undercover investigation by The Humane Society of the US (HSUS). This procedure is completed without painkillers.

Unprotected by federal laws, baby turkeys in the food industry are subject to “routine cruelty and neglect” on a daily basis, HSUS says. They’re thrown down metal chutes, forced into machines using hot lasers, and dropped onto factory floors and left there to be crushed.

In the wild, turkeys can live for around 10 years. But in the animal agriculture industry, explains Animal Aid, their lives are cut short at just 12-16 weeks. Most factory farmed turkeys are bred to grow as big as possible; within a few months of life, they can grow four times the size of their wild ancestors.

This selective breeding leaves some birds collapsing, unable to hold up their own weight. It also makes them more susceptible to disease, with a higher risk of heart problems and muscular damage.

And for hundreds of sick and injured baby birds, life ends in grinding machines because they don’t make the cut. Birds considered “leftovers” are also thrown into grinders, alive like their fellow poults, simply because they are not needed to fill orders.

Other reports indicate that birds are left shackled upside down and channeled through electric baths, or left to bleed to death.

A slaughterhouse is capable of killing 360 birds per minute – and 518,000 in 24 hours, the Food Empowerment Project reports. The non-profit rightfully brands the holiday “sadly ironic” for the extreme stress and pain enforced upon innocent animals when for some people, Thanksgiving represents positivity and freedom.

PETA director Elisa Allen stressed to PBN: “Humans are not gods but simply one species among many – a puffed-up one that rarely wants to recognise that birds are individuals with feelings and unique personalities and that they value their lives as we value ours.

“Killing them to eat is a barbaric, disgusting, and filthy practice that belies human decency and positions us as greedy, violent creatures with dirty old habits.

“Factory farms treat these living, feeling beings as inanimate objects and breed them to grow so quickly that their legs often can’t support their grossly enlarged bodies, leaving them in pain and unable to walk or even stand.”

It’s overwhelmingly evident that turkeys suffer at the hands of humans. And this impact is only exemplified when you look at the environmental cost of our appetite for turkey as well.

From the emissions pumped out by industrial farming structures to the land used to install each cage and machine – it all adds up. And, the facts are shocking.

Research conducted by catering and hospitality specialist Alliance Online found that a single kilogram of roast turkey is to blame for 10.9kg of carbon dioxide equivalent (CO2e). This means the “production” of one average-sized turkey leads to an output of 27.25 to 58.86kg of CO2e.

For context, a full vegan dinner can be prepared for a family of six while generating just 9.5kg of CO2e, separate research points out. Specifically, feeding six people a serving of nut roast, roast potatoes covered in vegetable oil, vegan pigs in blankets, sage and onion stuffing, and vegetable gravy still results in fewer emissions than one turkey.

And, according to the World Wildlife Fund (WWF), turkeys must eat three pounds of corn, soy, and other crops to produce one pound of weight.

Further, clearing land to grow this animal feed not only releases emissions, but places “crucial” habitats at risk, including the Northern Great Plains.

The problem of ammonia

The gas ammonia is present inside every poultry house, caused when the nitrogen found in manure is broken down by bacteria. If it builds up too high, it affects the air quality and puts the birds at risk of infections, as well as ulcers and eye problems.

Researcher Christopher Wathes describes this environment as seething in a ”disease miasma of gases, dusts, and micro-organisms.” Moreover, this may be the equivalent of “looking through dark glasses.” Lights themselves are often dimmed inside poultry houses to stop distressed birds from plucking each others feathers out.

This is not only grim conditions for turkeys themselves to live, but also builds a concerning picture for the world we all live in.

And that’s because a 2018 study named ammonia “the greatest concern” relating to pollution from poultry production. It can harm biodiversity, from plant species to aquatic animals due to an increased risk of algal blooms.

Further, ammonia exposure can trigger health problems in humans, including issues with the eyes, nose, throat, and respiratory tract. In extreme cases, this can lead to blindness, lung damage, or death.

It’s not just animal welfare concerns that have people thinking twice about the tradition; Thanksgiving has cultural implications too.

The holiday is widely considered a celebration of an agreement between the Pilgrims and Native Americans. But many argue that this narrative is strewn with potentially harmful falsities.

“The myth is that friendly Indians, unidentified by tribe, welcome the Pilgrims to America, teach them how to live in this new place, sit down to dinner with them and then disappear,” activist and author David Silverman explained to Smithsonian Magazine.

“They hand off America to white people so they can create a great nation dedicated to liberty, opportunity and Christianity for the rest of the world to profit. That’s the story—it’s about Native people conceding to colonialism,” he said.

According to Silverman, this version of events ignores the fact that Native people were living in the Americas for at least 12,000 years before the Europeans arrived. And, that the groups had century-long conflicts, which were “bloody” and involved slave raiding by the Europeans.

Establishing such Thanksgiving myths, Silverman says, meant “Americans could feel good about their colonial past without having to confront the really dark characteristics of it.”

On its website, HipLatina writes that we should use this time to learn more about the real history of Thanksgiving.

“There are lots of ways to incorporate and acknowledge the pain of the Native peoples into time spent with family. Read up about the real history of the United States and discuss it, create a safe space for people of color to talk about the difficulties they are dealing with right now, or create care packages for Native peoples on reservations who have such limited resources (particularly the school children),” the website reads.

“For people of color, existence is resistance, and any moment we have right now to capture and share joy with loved ones should be deeply appreciated and held sacred,” HipLatina continues.

“I’m not telling you not to enjoy a shared meal with friends and family, I’m just saying that we should not allow the erasure of the real history of suffering behind this holiday.”

Dr. Greger on How to Stay Healthy and Plant-Based This Thanksgiving Holiday

9 Tips to Have a Healthy Thanksgiving Holiday, from Nutritionist Keri Glassman

How Kroger’s Simple Truth Brand Can Inspire Your Vegan Plate