The 10 Best Vegan Cookbooks to Give This Holiday Season 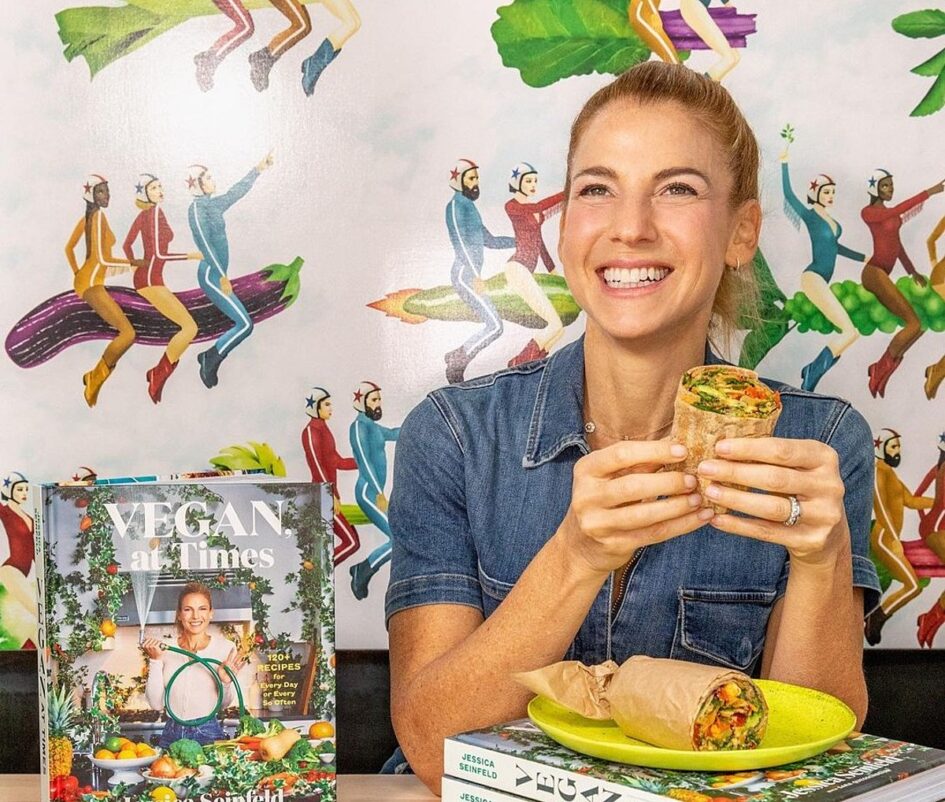 What do you get the chef who has everything? A cookbook. Delight non-plat-based eaters and vegans alike with one of these amazing, inspiring vegan cookbooks that shows how easy and delicious it can be to eat plant-based meals. Vegan eating is on the rise, as is a “flexitarian” approach. So why not spoil them with a beautiful cookbook full of new and delicious-looking recipes that they will use again and again?

From vegan chefs to total newbies, several new vegan cookbooks have entered the market and each one provides an incredible insight into the best techniques and ingredients for cooking delicious yet healthier-for-you meat-and-dairy free meals. Despite the popularity of plant-based cuisine, most at-home chefs can use a little inspiration now and then.

These cookbooks, by plant-based chefs living enviably beautiful lives and creating delicious recipes in vast kitchens full of light, may seem a world away to the rest of us in our cramped or dark city apartments, but they also provide the exact amount of aspiration and how-to advice to help anyone, even the total newbie, step up their vegan chef game.

Whether it’s to prepare for a plant-based New Year, New You healthy eating resolution or to add to a vegan bookshelf, any of the following cookbooks will make for a thoughtful and useful gift.

Finding soul food classics without meat and dairy ingredients can be one difficult task, but Nadira Jenkin-El compiled the best of the best for any plant-based consumer. Her soul food cookbook provides modernized plant-based variations of some of the South’s most iconic dishes. From vegan Gumbo to Cajun Fried “Chicken,” the soul food cookbook provides a glimpse inside the vegan South. The cookbook is full of comfort foods and easy-to-cook dishes that will satisfy the family year-round.

Beyond its flavor-packed recipes, Jenkins-El provides how-to sections to provide new time cooks with the correct techniques to replicate the iconic foods. The soul food cookbook works as an amazing jumping-off point for at-home vegan cooking and then provides a wide selection of dishes for anyone to know inside out.

2. The Korean Vegan Cookbook: Reflections and Recipes from Omma’s Kitchen by Joanne Molinaro

Joanne Molinaro rose to fame via social media when her cooking blog moved to TikTok, sharing plant-based recipes and tricks to nearly 3 million followers as The Korean Vegan. Now, Molinaro is compiling her innovative vegan variations of traditional Korean recipes into a cookbook. The recipes are joined by several anecdotes that discuss plant-based foods, nutrition, identity, and Molinaro’s own life. The Chicago-based chef explores veganism and Korean cuisine through heartfelt stories and more than 80 plant-based recipes.

Molinaro – who previously worked as a lawyer before dedicating herself to vegan food – presents a cookbook unlike any other on the market. For any reader, the cookbook acts as more than a collection of recipes, but an insightful narrative that brings the at-home cook and reader through Molinaro’s life experiences. The recipes including gyerranmari (a Korean-style omelet) and Pecan Paht Pie act as guides through a riveting series of anecdotes that sets this cookbook far apart from others on the shelves.

3. The Vegan Meat Cookbook: Meatless Favorites Made With Plants by Miyoko Schinner

Miyoko’s Creamery is a household brand in the plant-based world, developing some of the most exciting dairy-free alternatives on the market. Founder Miyoko Schinner consistently works to make plant-based eating accessible through her company, but more importantly, through outreach. Whether it’s her Wine Country 2.0 or her new vegan butter YouTube channel, Schinner is constantly making space for plant-based education. Her cookbook showcases everything that Schinner and her brand stand for, providing exciting new recipes that require only minimal guidance.

Schinner’s cookbook features innovative recipes such as Enchiladas with vegan Carne Asada and plant-based sausage calzones. The key to Schinner’s cookbook is that she addresses alternative protein. For many consumers, giving up meat seems impossible, but Schinner’s cookbook provides the helping hand complete with detailed instruction on what plant-based protein works best in certain dishes and across several cuisines. This is a key gift to a new plant-based eater who needs just an extra bit of help.

Purchase The Vegan Meat Cookbook on Amazon or on Barnes & Nobles’ website.

4. How to Cook Everything Vegetarian by Mark Bittman

Even though Mark Bittman’s book is not completely plant-based, the cookbook breaks ground and provides a space for flexitarians, vegetarians, and non-vegan eaters to start increasing plant-based intake. As a pioneer in the plant-based food scene, Bittman’s How to Cook Everything Vegetarian presents one of the most accessible plant-forward books on the market. The cookbooks connect recipes and plant-based eating to health, sustainability, and ethics, providing information on the benefits of plant-based eating.

Bittman also released a new edition to his book that features brand new vegan recipes and a new chapter showcasing smoothies, teas, and other exciting food and beverage options. Bittman’s book provides a perfect gift to anybody interested in plant-based foods, because like the title indicates, you can learn to cook anything vegetarian, and eventually vegan.

Purchase How to Cook Everything Vegetarian on Amazon or on Barnes & Nobles’ website.

PlantLab is the prime cookbook for an experience plant-based home cook. As a leader in the plant-based fine dining scene, Matthew Kenney compiles his most inventive and creative techniques within his cookbook to help home cooks and chefs alike concoct their own delicious plant-based meals. The cookbook offer over 100 recipes that become increasingly more creative and intricate as you progress through the book. The book is a learning experience, designed to give any cook a full-scale lesson in plant-based cooking.

PlantLab is experimental, giving anybody the chance to explore the potential of plant-based cooking. While plant-based cooking is often seen as a dietary constraint, Kenney’s cookbook pries that stereotype open and allows anyone to see inside. The cookbook starts with beginner techniques and works its way through Kenney’s culinary style, food lovers somewhere to begin in their own kitchens.

Bryant Terry’s Vegetable Kingdom is the James Beard Award-winning chef’s fifth book. The renowned chef is an active defender of food justice, working to combat food insecurity across the US and the world. Terry advocates for a more sustainable and fair food system, and through that provides guidance as to where to start. The chef’s book presents a wide selection of exciting, nutritious recipes alongside techniques and flavoring lessons to make any plant-based meal as savory as possible.

Terry’s cookbooks feature recipes including a millet roux mushroom gumbo and dirty cauliflower rice. The recipe collection is filled with Afro- and soul-centric dishes, but also contains inspirations from several other regions. The book, containing over 100 recipes, also holds flavors from the South, the Caribbean, and the Far East, making this a staple cookbook for anyone.

7. The Modern Tiffin by Priyanka Naik

Priyanka Naik goes one step beyond simply creating vegan variations with her new cookbook by designing her recipes to fit in a tiffin – an Indian-style lunch box. The cookbook feature 55 recipes from across several cuisines that will all be fit for a lunchtime meal. Naik’s book is the perfect gift for anyone that’s constantly on the move or wants to create a smaller plant-based meal.

Naik is a self-taught Indian American chef who works to combine her love for cooking with her travels. The recipes collected from around the world are given an Indian-inspired twist, making this one of the most unique cookbooks to purchase. The book features recipes including Indian Home Fries with Peanuts, Chili-Maple Skillet Corn Bread, and many more.

Purchase The Modern Tiffin on Amazon.��

8. Vegan, At Times: 120+ Recipes For Every Day or Every So Often by Jessica Seinfeld

Jessica Seinfeld is meeting people halfway with her new cookbook Vegan, at Times. While more people than ever are looking for ways to incorporate plant-based foods into their diet, abandoning favorite dishes or ingredients can feel intimidating. Seinfeld’s cookbook is the perfect gateway into plant-based dieting without any of the intimidating commitment. She provides a vast number of plant-based recipes that cover all the bases, giving consumers a chance to try plant-based food for any occasion.

Seinfeld’s cookbook is an easy gift that allows a plant-based eater, flexitarian, vegetarian, or non-vegan the chance to lower their meat and dairy consumption with ease. The recipes are all designed to be extremely accessible, sourcing easy-to-find ingredients and providing detailed instruction on how to cook meatless dishes. Overall, Vegan, at Times is an exciting entrance to plant-based cooking that home cooks would love in their collection.

Purchase Vegan, At Times on Amazon.

9. The Wicked Healthy Cookbook: Free. From. Animals. by Chad and Derek Sarno

Chefs and brothers Chad and Derek Sarno released The Wicked Healthy Cookbook in 2018, featuring some of the most exciting plant-based recipes available to this day. The cookbook is filled with innovative and experimental techniques that make plant-based cooking feel both easy and exciting to home cooks. One technique featured is a Sarno classic: pressing and searing mushrooms to replicate a meat-like texture. The new techniques and recipes provide home cooks with a fresh take on plant-based food as the Sarnos pave the way for vegan cuisine inspired from several regions.

Sarno’s cookbook provides recipes for any meal of the day including a Vanilla Spiced Gelato and Sloppy BBQ Jackfruit Sliders topped with Slaw. Packed with 129 recipes, the Sarnos’ riveting cookbook is a perfect present for the most avid plant-based cooks or a new at-home chef regardless of dietary preference. Both the Sarno brothers promise that this cookbook will help all home cooks turn plant-based foods into “food legend.”

10. hot for food all day: easy recipes to level up your vegan meals by Lauren Toyota

Lauren Toyota revealed her second cookbook in March of this year, showcasing 100 new delicious vegan recipes for any time of day. The Youtube star went viral for her exciting plant-based recipes, sharing tips and techniques on how to whip up some of the best vegan meals with anything from leftovers or fresh ingredients. Her cookbook is the all-in-one guide to plant-based cooking that is a perfect introduction for newbies in the kitchen. From buffalo chicken wraps to Tokyo street fries, there is a recipe for every occasion in the cookbook. Toyota also adds bonus meals that will save on meal prep time and tastebud fatigue, making old recipes twice as exciting with no animal-derived ingredients.

Purchase hot for food all day: easy recipes to level up your vegan meals on Amazon.

The Best Plant-Based Cookbooks to Give in 2021

7 Plant-Based Roasts You Need to Try This Holiday Season

Relieve All of Your Stress This Holiday Season With Interval Yoga

Vegan Kebab Shop To Give Away 100 Free Kebabs

Heura Christmas Sandwich Pop-Up Will Give Away 5,000 Vegan Turkey Sandwiches