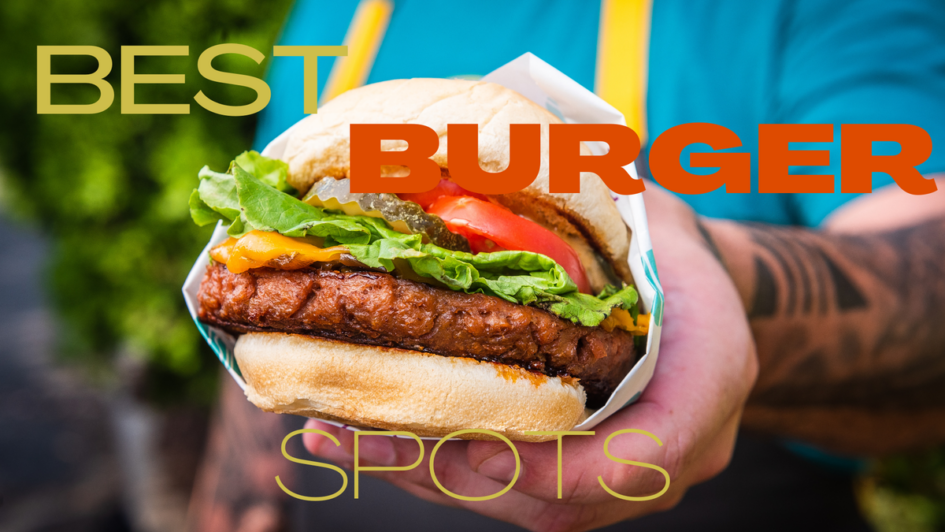 Sometimes, we eat nothing but kale and tomatoes picked right off the vine. Other times, we just want a burger. It’s called balance. And, when we’re ready to indulge, the choices available now are better than ever. Picking the best veggie burger is highly personal, of course, but we’ve assembled a list of some of our favorite places to get them across the U.S.

The establishments we’ve chosen here are all fully-vegetarian or vegan. We know there are plenty of places that cater to both plant- and animal-based diets with great veggie burgers but, for a number of reasons, we’ve limited our scope of consideration to veg-only, fast-casual-style spots.

We could have kept going on (and on) but we stopped here for now. Expect this list to continue to evolve.

Be sure to also check out our lists of best new restaurants and best classic restaurants for 2021.

Brothers Fred and Max Guerrero grew up around burgers; their father founded L.A. burger cafe The Oinkster. The younger Guerreros started a Tumblr about burgers that took off, and re-used its title, Burgerlords, when they opened an In-n-Out-inspired spot of their own in 2015. A veggie burger was on the menu from the outset, but initially they sold meat, too. That changed in 2020, when Burgerlords transitioned to an entirely vegan operation. Now they’re turning out multiple variations of all-house-made burgers (they have both a more ‘meaty’ patty and a more veggie-ish option), nuggets, burritos, shakes, and more. burgerlords.com

Lekka’s burger starts with a a soy-free, gluten-free, whole-food-based patty made fresh daily, so there’s pretty much no reason not to let yourself indulge – and Lekka is the work of acclaimed Dirt Candy chef Amanda Cohen, so you know you’re in good hands. Where many of the best veggie burgers hue towards the thin or smashed patty style, Lekka takes what might be termed a ‘pub burger’ approach. A thicc boi, one might say. The base patty is available with a myriad of toppings, from guacamole to fried pickles to coconut chutney slaw, and can be accompanied by shakes, soft serve, perfectly crinkly fries – or even a salad, if that’s what you’re into. lekkaburger.com

Restauranteur Nic Adler has served as the culinary director of taste-making events like the Coachella Music & Arts Festival, managed bands, and run iconic music venues – so it’s no surprise that the burger brand he co-founded quickly found a devoted fan base. The five Monty’s locations have energetic rock n’ roll diner-type vibes and the menu keeps it classic and simple. Burgers are ‘Impossible 2.0’ patties (with optional Follow Your Heart cheese) and fantastically satisfying (just ask vegan movie star Joaquin Phoenix, who famously celebrated his 2020 Best Actor Oscar with a post-ceremony Monty’s moment). montysgoodburger.com

Chef Spike Mendelsohn first gained national attention as a contestant on Top Chef way back in 2008. After his reality TV turn, Mendelsohn – part of a long family line of chefs and restaurant workers – opened his own restaurants, including Good Stuff Eatery, an animal-based burger concept near the White House which gained national attention of its own as a favorite of President Obama and his team. But in 2019, he launched the first PLNT Burger, putting his burger expertise to work on something a little more animal-friendly. Between the buns at PLNT is patty made using Beyond meat products, and aims to be ‘meat-like’ enough to win over customers who don’t normally gravitate to plant-based options. It seems to be working; the chain has already opened nine locations and plans for more. plntburger.com (pictured at top)

Matt McNamara, a James Beard Rising Star Award-winning chef, was co-chef and partner at San Francisco’s Sons & Daughters – an elegant, Michelin-starred spot with a $225 tasting menu – but in 2019 he decided he was ready for a change. McNamara and a small team of colleagues moved about an hour down the California coast, started an 83-acre organic farm, and opened Pretty Good Advice, a walk-up daytime cafe with seasonal, farm-driven dishes. The core offering remains year round: burgers made with “the PGA Patty,” a house-recipe vegan burger made from beans and quinoa, and topped with options like roasted jalapeños, smashed avocado, and frizzled onions. prettygoodadvicesoquel.com

The Best Veggie Wing Recipes for Game Day (or Any Day)