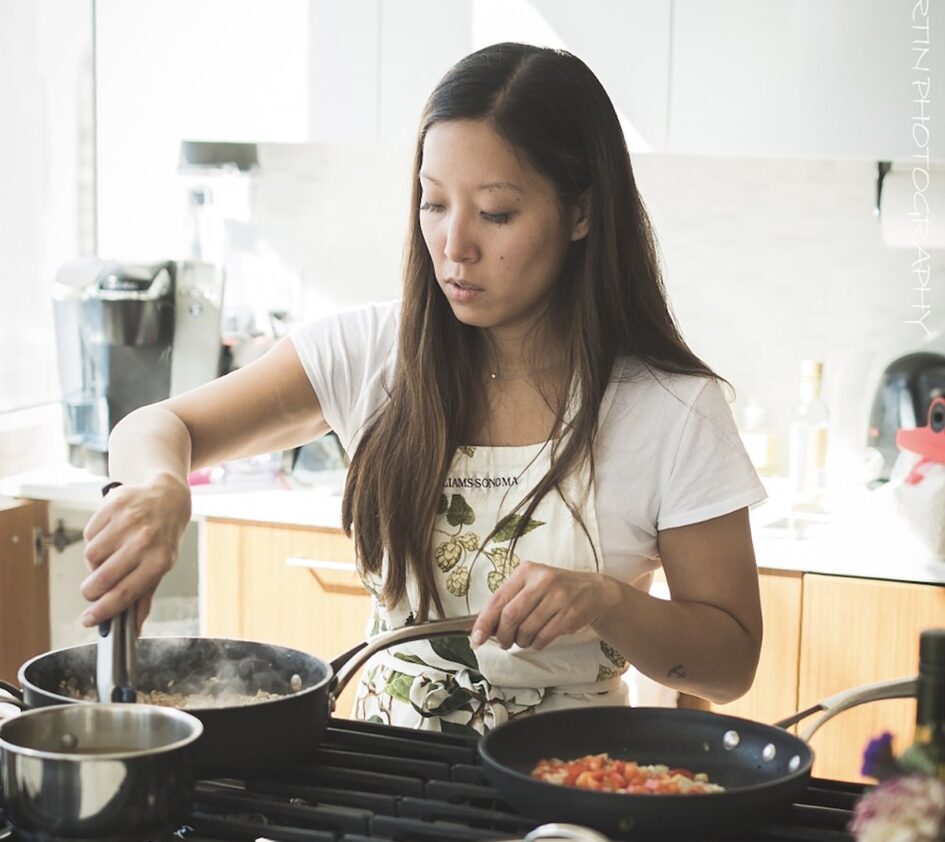 Tiktok star Joanne Molinaro – better known as The Korean Vegan – first launched her food blog in 2016, showcasing delicious plant-based twists on traditional Korean-style cuisine. Since the blog’s inaugural entry, Molinaro’s popularity soared as she detailed her plant-based journey alongside personal anecdotes and stories that guide viewers through her cooking. The star recently released her new cookbook, The Korean Vegan Cookbook: Reflections, and Recipes from Omma’s Kitchen, presenting a close-up look into Korean cuisine, the benefits of plant-based eating, and identity.

Molinaro – who currently has nearly 3 million followers on Tiktok and 300,000 subscribers on Youtube – started working on her cookbook to create an accessible entry point for conversation concerning identity, cuisine, and her own life. The recipes featured throughout the book accompany stories and anecdotes meant to disarm people and facilitate the connection between the readers and Molinaro’s personal experience.

“My wish for The Korean Vegan Cookbook is that it becomes greasy, folded up, dog-eared, and stained in kitchens across the world,” Molinaro told The Beet. “I want people to actually USE the book–not have it just sit idly on some shelf or on a coffee table! I want people to read through the stories and cook through the recipes and prove to people that you can be plant-based while also remaining close to your heritage and true to your identity.”

The Korean Vegan Cookbook has reached the #3 spot on the New York Times Bestseller list in the Advice, How-To, and Miscellaneous category. The cookbook is 336 pages long, featuring 80 unique plant-based recipes that blend traditional Korean cuisine and Molinaro’s experience as a Korean-American. The dishes range from traditional noodle dishes to banchan. The cookbook also serves as a guide to several traditional ingredients in Koren cooking such as doenjang. Molinaro makes sure that anybody who purchases the book knows exactly what to keep in the pantry.

Molinaro first adopted her plant-based diet five years ago, citing several motivators that finally inspired her to leave behind meat and dairy. Between documentaries and influence from her relationships, Molinaro felt encouraged to change her diet, finding the process shockingly simple.

“I first started exploring a plant-based diet in 2016 when my husband (then boyfriend) decided to go vegan for health reasons. I didn’t want to join him at first, but after a couple of weeks (and several movies like Forks Over Knives, Cowspiracy, etc.), I decided to give it a try,” Molinaro told The Beet. “It was much easier than I expected.”

“The nail in the coffin was when my father got sick. It was such a weird thing,” Molinaro told VegNews. “Literally, my dad has never been sick and then he gets diagnosed with prostate cancer—the same thing they talked about in Forks Over Knives with East Asian men. I’m not an overly religious person, but I did feel like God was trying to give me a sign here.”

Her cookbook is meant to present plant-based eating with vulnerability, allowing readers to feel a welcoming embrace. Molinaro wants people to feel that plant-based eating is accessible rather than an unattainable goal. Her stories and explanations serve to reach out to the readers, giving context to recipes and cuisine.

The influencer recognizes that plant-based eating takes to progress, and her cookbook could be a stepping stone for her followers and many more. From veganism to flexitarianism, Molinaro’s cookbook aims to intrigue all audiences to promote plant-based eating for health and environmental reasons.

“This idea of a flexitarian diet—think about the ramifications, if one person decides ‘once a week, I am going to ditch the meat and I’m going to have a completely plant-based day,’” Molinaro told LiveKindly. “Multiply that by hundreds of thousands of people here in the U.S. When you think about the impact that one meat-eating meal has on the planet, has on animals, and you multiply that by 100,000, and you immediately take that out of the equation”

The cookbook features recipes across every meal of the day, ranging from breakfast to dessert. Some key recipes include a gyerranmari or Korean-Style omelet, a Pecan Paht Pie cooked with a sticky sweet pecan pie filling, and Soondooboo Chigae complete with silken tofu, vegetables, and gochugaru. For more recipes, purchase a copy of The Korean Vegan Cookbook, which is available on multiple platforms featured on her website. The cookbook shares meals and recipes, but Molinaro’s reflections tie them all together.

“I tell stories to disarm people. I want people to feel like they’re sitting down with me at my kitchen table. There’s implicit trust in sharing a meal with someone … How much further can we disarm ourselves with the purpose of sharing, trusting, and being open to each other—to new ideas, to new concepts, to new flavors not just on our tongue but in our hearts? It’s important to challenge ourselves with preconceived notions of anything,” she told VegNews.

Next Gen: “The Reception From Chefs & Early Consumer Tests in the US Has Been Outstanding”