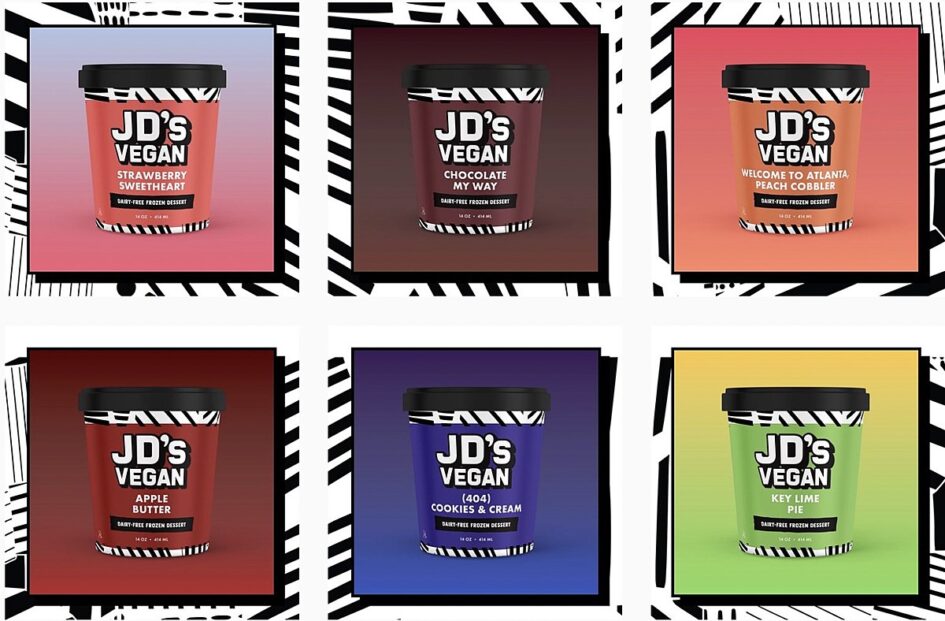 What’s sweeter than a love song? A vegan frozen dessert named after one. That’s what Jermaine Dupri is betting on with his new line of vegan frozen desserts that have a musical twist and a sweet taste that you can enjoy alone or with a loved one, fresh from the freezer aisle. Dupri, Creative Advisor to The Beet, long-time vegan (of more than 15 years), and superstar music producer, is never sitting still. He just spent the better part of the summer in the studio working on new songs from emerging artists and chart-toppers alike.

We caught up with JD on his way back to his Atlanta home, where he was preparing the launch of his latest production, JD’s Vegan, which if they gave out grammies for ice cream, would win in every category: best new artist, best package, best engineer and best alternative. Dupri, already in the song writers’ hall of fame, could also be up for a lifetime achievement award, since his consistent message over the past decade and a half has been: Go vegan, for your health, for the animals, and now – with the summer of climate disasters across the nation – for the planet. Once you find your “go-to” alternatives, you will love it.

Lucy: I got the Strawberry Sweetheart flavor. Why are you starting a vegan ice cream line?

Jermaine: I don’t think — I know for the fact that there is not really a cool ice cream that’s out there that is a “go-to” for every vegan. each place has different ice cream. Every restaurant has different types of vegan ice cream. As we get deeper into the vegan lifestyle, there are a lot of things that are needed in the space.

But this one area, in particular, that I thought I could have a run with it. the flavors I am bringing out are not your typical flavors. Strawberry Sweetheart I thought a lot of people like strawberry, so they wouldn’t wait for the next flavor.

Lucy: It’s so good!  And sweet! It hits the spot. Where is it being made?

JD: It’s being made in New Jersey. We are coming out with 6 flavors at first, each one tied into a different song. But to get people to understand what it is and that this is a frozen dessert company, we wanted to come out with a flavor that is popular. I am blending my flavors with my song titles. So the titles of the flavors each relate to music that I have made. So Strawberry Sweetheart is blended with my song Sweetheart.

Lucy: Jermaine, for anyone who doesn’t know, is an award-winning, Grammy-winning producer, artist and songwriter. Are you able to share what you’ve been working on?

Jermaine: Multiple projects – so many projects are coming out. Almost every other day I have a new project coming out. I have been grinding my life away. One of my new artists just came out here, so I am in New York.

Lucy: It’s super sweet. And strawberry-y. Want to tell us what it tastes like?

When you go to a vegan restaurant, it’s already hard enough to find food that you want, but then to have a real dessert afterward is like pulling teeth. Even if you find an amazing restaurant, usually the dessert is not up to that level. So we are hoping that restaurants put JD’s Vegan on their meu.

JD: It’s coming out in the middle of October. And it will be sold all over. In the next week or so, we start promoting it. We are going to start with different restaurants, like the most famous ones, like Nick’s in LA and hopefully, Crossroads will start as well We are going to launch it like impossible did, so just available in restaurants, first. Then people can find it and eat it at home.

Lucy: What’s it made of?

JD: It’s a cocunut base. I will send you the ingredients. This was made by the guy who created the real ice cream flavor, Cookies & Cream. He is the creator of this flavor and I had it when I was in LA. I thought I can’t believe this is mine, it’s so great.

Lucy: How many flavors are you going to bring out?

JD: Chocolate My Way. That’s made with dark chocolate, cocoa butter, and a hint of vanilla bean. Welcome to Atlanta Peach Cobbler, Cookies & Cream, Strawberry Sweetheart, Keylime Pie, and -– I am doing six flavors at first. The state of Georgia is the Peach State. So we are doing the Peach Cobbler for the State of George.

They can advance order it.

Lucy: We are always looking forward to what’s coming out of the studio! And of course this!

JD: It’s all connected – the frozen dessert and the studio. Technically ice cream is made with dairy so that’s why I call this a frozen dessert. As a vegan, you don’t want anything made of dairy.

Next, I am going to create JD’s Vegan Army, of people who can help others who want to be vegan, with their journey. And there is going to be an explosion of activity around that.