The No Catch Co: “Our Mission is to Take On the Fish and Chip Shop Industry” 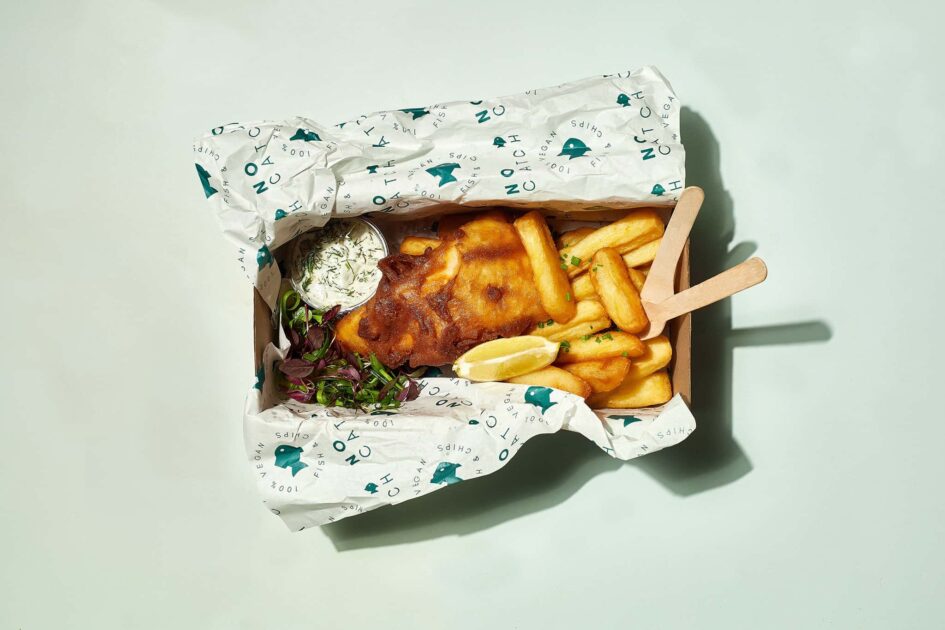 The No Catch Co was unveiled to great excitement in the UK last month by founders Earthling Ed and partner Kevyn Bourke, who also run London’s biggest vegan restaurant Unity Diner, state: “We believe that enough is enough, and that it’s time for a revolution within the seafood industry.”

It’s a worthy and imperative mission; a cause that is increasingly becoming part of consumer consciousness especially in the wake of Seaspiracy.

“The British public is absolutely ready for vegan fish and chips”

Ed and Kevyn took a quick moment out of their extremely busy schedules to brief us on the UK’s brand new vegan fish and chip shop chain which has debuted in Brighton and has ambitions to expand nationally.

Tell us about the decision to launch a chain of vegan fish & chip shops – why now?
As many as 2.3 trillion fish are pulled from the ocean and killed every single year for food. But as well as being a moral issue, the fishing industry is devastating for the environment as well. The fishing method of bottom trawling alone produces more greenhouse gas emissions than the entire aviation industry and the destabilisation of fish populations affects the entire planet. We’re running out of time to save our oceans and thus need a revolution within the seafood industry.

How many outlets do you foresee – how big will you go with The No Catch Co?
We cannot say anything yet, but we certainly hope to grow to expand our impact.

Will these be restaurant locations or take-away only?
Both – our Brighton location serves as a sit-in restaurant and it also has takeaway options.

Where will you open the next location?
We’re planning to evaluate this in early 2022, and we’re open to suggestions!

Fish and chips are such a classic British dish and after our success with Unity Diner in London where the signature dish has always been the tofish, whether it’s the tofish and chips or the tofish burger, we decided that it was time to open another restaurant but this time with the focus on reducing fish suffering.

We want to show the public that you don’t need animal products in order to have incredible food. From tofish burgers to prawnz and even creamy New York-Style American Cheesecake (no cows harmed), we’re striving to offer alternatives where you never feel that you’re missing out. In 5 years we certainly hope to have opened more vegan fish and chip shops, but we also hope that our vegan dishes allow more people to go fully vegan and choose cruelty-free, delicious meals more easily.

The No Catch Co’s first location is at 127a Kings Road, Brighton BN1 2FA, UK.

Take a look at the menu here https://www.nocatch.co/menu featuring vegan versions of all traditional fish and chip shop menu items.

Factory farming fish: ‘People would be staggered by the size of Europe’s aquaculture industry’