The Real Environmental Cost Of Your Glitter Addiction 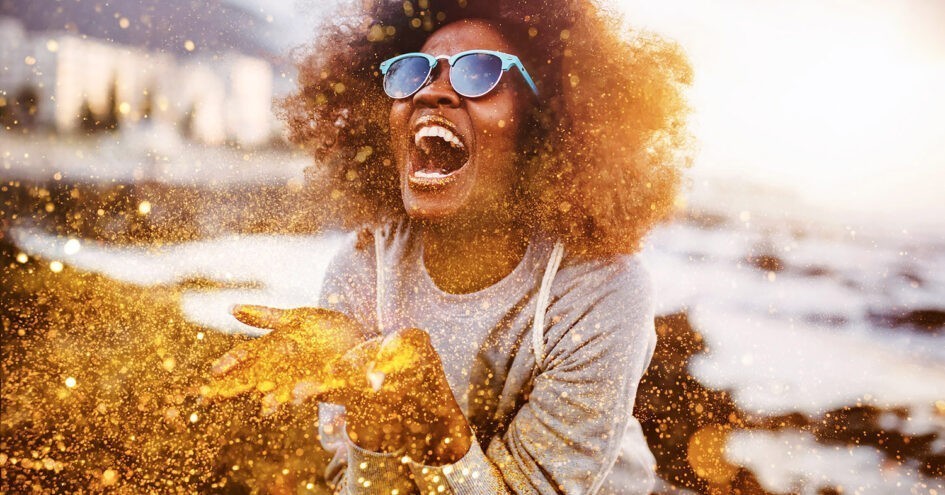 Humans have loved making things sparkle for thousands of years. Long, long before festival makeup and Christmas cards, Upper Paleolithic people were using mica crystals to make cave paintings glisten and glimmer. Ancient Egyptians favored a different approach, opting for crushed up beetles to make things twinkle. And today, many of us use glitter during celebrations or special occasions.

While it makes our wrapping paper pretty and our makeup pop, there’s a real downside to our love of sparkly things. Glitter consists of tiny pieces of plastic, and for that reason, it endangers wildlife, ecosystems, and maybe even us. But, while progress is currently limited in this area, there have been developments in the last few months that could mean planet-friendly sparkles are just around the corner.

Glitter is just a shimmery microplastic

For the most part, microplastics (smaller than five millimeters) start their lives as something bigger. They might come from polyester (a material frequently used in the fast fashion industry), an old beverage bottle, or beauty packaging. When these items degrade, they don’t vanish, they break down into much, much smaller pieces. Glitter is so tiny from the offset, it actually starts off as a microplastic.

These miniscule pieces of plastic can be found in oceans, rivers, rain, plants, ice, the stomachs of wild animals, the air, and as a result of all of this, even in our own digestive systems—it’s estimated we consume the equivalent of one credit card full of microplastics a week. (More on all of this here.) Right now, we’re still figuring out the extent that consuming plastic could be harming us, but scientists do know that it has a detrimental impact on wildlife.

Last year, researchers found direct evidence that glitter negatively affects rivers and lakes. They collected samples from the UK’s River Glaven, and in the lab, dosed water, sediments, and plants with different types of glitter (some of which were sold as biodegradable, but none of which were totally plastic-free). The findings showed that glitter upset the natural balance of their samples, throwing ecosystems out of whack. “Plastic glitter persists in the environment,” says the study’s lead author Dr Dannielle Green, who works as an associate professor at Anglia Ruskin University’s School of Life Sciences. “It can have similar impacts as other types of microplastics, reducing the growth of plants and algae, which are the base of the food web, and can be ingested by some invertebrates in aquatic ecosystems.”

And another 2020 study, this time focusing on the Atlantic Ocean, found that nearly 50 percent of the fish they examined had microplastics in their dorsal muscle (that’s their back fin), their gills, or their gastrointestinal tract. Of the fish with microplastics in their system, researchers found they had higher levels of lipid peroxidation (in layman’s terms, their cells were damaged, putting them at higher risk of diseases). In wider research, microplastics were also found to affect the health of coral, cling to seaweed, and impact oyster reproduction.

So, should we sacrifice our sparkles?

The obvious answer to this environmental problem is to minimize our plastic use. Glitter makes up less than one percent of microplastics, so it’s not a huge contributor to the issue. But it’s also not an essential part of life, so it seems like a no-brainer to reduce it where we can. And in the UK, retailers, including Morrisons, Waitrose, and John Lewis, are trying to get consumers to do just that, with holiday product glitter bans. “Everytime a cracker is pulled or a card is opened, plastics have been used… but just the once,” said Christine Bryce, the home director for supermarket chain Morrisons last year, before stating that all of the brand’s own ranges were 100 percent glitter-free. “It’s an important step in our fight against plastic pollution,” she added.

It makes sense: aside from microplastics, slathering glitter on cards and wrapping paper significantly reduces their recycling potential. But there is more to glitter than Christmas or New Years Eve decorations. Across the LGBTQ community, it has a meaning far beyond its shimmer.

Many of the first drag queens wore glitter in their makeup in the 1950s, and this tradition has continued today, with sequined costumes, sparkling eyeshadow, and glitter cannons a staple of many performances. As sociology professor Anya M. Galli Robertson wrote for Quartz: “The imagery of glitter is tied to dance clubs, drag queens, and the colorful history of using visual culture and fashion as methods of making LGBTQ communities visible.” They also referenced the significance of glitter bombing—a peaceful form of protest often deployed against far right anti-LGBTQ rights politicians​​—and Glitter Ash Wednesday, a movement that sees certain churches blend glitter with blessed ashes as a mark of acceptance and love for the queer community.

So, for those who love glitter or see it as an important part of their identity, community, and history, sustainable alternatives are the way forward. But it could be a few years before we see any bonafide environmentally-friendly options.

When will sustainable glitter be available?

While a number of glitter products claim to be biodegradable or better for the planet, Green’s study found that even cellulose-based glitter, which is supposed to be more environmentally-friendly, had a negative impact on ecosystems. But none of the products tested in the study, which took place in 2018, were plastic-free. In recent months, there has been more progress on this front.

In November, Cambridge University researchers revealed they had developed a glitter for the cosmetics industry using cellulose nanocrystals. Their version is plastic-free, and can be scaled up using a roll-to-roll process similar to that used in the paper industry. The cellulose is transformed into liquid, before drying on a roll-to-roll machine, and the resulting film is then ground into particles that have a size and shimmer more or less identical to glitter.

“Cellulose nanocrystals can bend light in such a way to create vivid colours through a process called structural colour,” reads the report announcing the findings. “The same phenomenon produces some of the brightest colours in nature–such as those of butterfly wings and peacock feathers–and results in hues that do not fade, even after a century.”

The plastic-free alternative is still a few years away from being commercially available. And in Green’s view, any new research into sustainable glitter needs to go through independent testing before it hits the market. “Often products are developed and on the market without adequately testing the environmental impacts first,” she notes.

But Cambridge scientists are optimistic that this new development is a breakthrough. “Consumers are starting to realise that while glitters are fun, they also have real environmental harms,” said lead researcher Professor Silvia Vignolini, before adding that the new research “could revolutionise the cosmetics industry.”

With hope, the quest for sustainable sparkles will prevail in the near future, and options will be abundantly available in the beauty, clothing, and greetings card industries. But for now, it’s about weighing up that extra dose of sparkle with the impact more microplastics could have on our natural world. Perhaps, until then, our eyelids and holiday cards can go without their shimmer.

NetCredit reveals the cost of essential food around the world

Why Yemen’s civil war is also an environmental one