The Thames Is Alive! Plus More Good Climate News 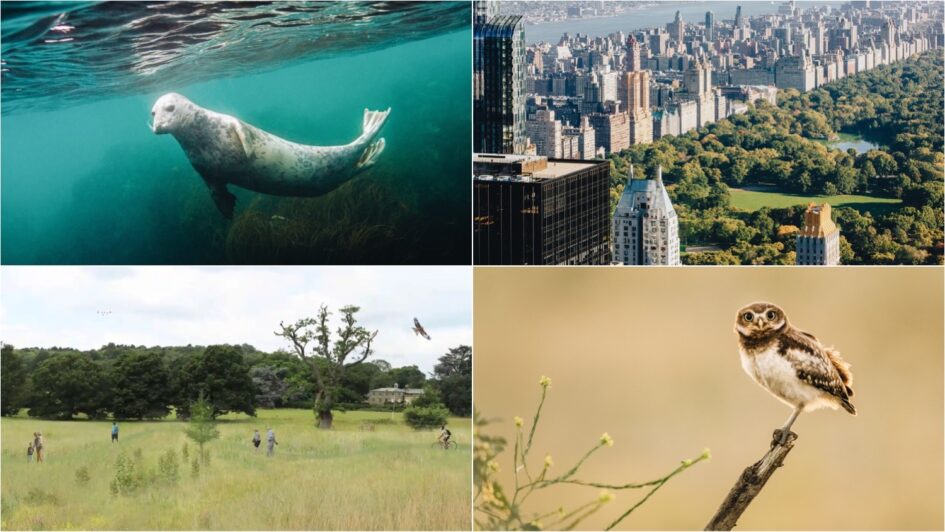 The River Thames, one of the UK’s most iconic waterways, is back from the dead. While Apple, the largest tech company in the world, is finally allowing users to mend their own gadgets—a huge win for the right to repair movement. In New York City, the success of urban greening is apparent in its thriving wildlife. And in California, owls are being welcomed into vineyards in order to move away from toxic pesticides. Here’s this week’s good climate news.

The Thames is coming back to life

The good news: The River Thames, which flows through the south of England and was once a dead zone, now supports a surprisingly wide variety of living creatures. Eels, seahorses, seals, and three different varieties of shark—the Starry Smoothhound, Spurdog, and Tope—can all be found in the Thames, along with countless other animals.

The impact: The Zoological Society of London (ZSL) recently completed the most comprehensive survey of the river in over 60 years and found that the Thames is undeniably healthier today than it was half a century ago—despite the continuing problem of waterway pollution. Increased oxygen levels and decreased phosphorus help to support the flora and fauna that call the river home today.

According to conservation charity the Mammal Society, approximately 900 harbor and 3,200 grey seals currently reside in the estuary, and both showing a steady “upward population trend.” There are also 92 different species of bird who live on the river and are showing growth, with the overall number of wading birds like lapwings and knots almost doubling.

Did you know? In the 1950s, the Thames was so devoid of life it was declared biologically dead, but progress in sewage and pollution management has had a demonstrable, positive impact on its overall health. However, some populations are still declining—particularly fish, of which there are around 115 different species—due to the continuing impact of human pollution and the growing danger of climate change.

How you can help: Volunteer with and donate to ZSL here, or support the Mammal Society here. You can learn more about the Greater Thames Shark Project here, and get involved with organizations such as Thames 21, the Clean Rivers Trust, and UK Rivers. (In England, the general public has access to just three percent of rivers. Get involved with Right to Roam.)

Apple is launching a self-repair service

The good news: Tech behemoth Apple will now let you fix your own phone. After years of public pressure (and a $500 million settlement for its notorious planned obsolescence), customers will finally be able to access genuine Apple parts, tools, and manuals in order to carry out their own repairs. Phase one of the repair program will focus specifically on the most commonly broken features such as the screen, battery, and camera.

The impact: The right to repair is important for a variety of reasons. Planned obsolescence, the intentional limitation of product lifespans, and an inability to carry out basic repairs cost individuals a significant amount of money. (Over the last decade, the price of a new iPhone has increased by 162 percent.) Upgrades also create huge quantities of avoidable waste.

Did you know? In 2020, approximately 1.4 billion smartphones were sold worldwide. Apple alone produced over 1.65 billion electronic devices, about a billion of which were iPhones. (For its 2021 fiscal year, the company reported nearly $100 billion dollars of net income.) While support is growing for the right to repair, it is notably tech giants like Apple (along with Microsoft, Amazon, Google, Facebook, and Tesla) who lobby against it.

Overall, manufacturers produce upwards of 50 million tonnes of e-waste every year, with 83 percent of this discarded improperly. Increasing global awareness of the need to consume less, repair more, and preserve rare earth minerals is finally reaching producers like Apple, and self-repair services are a small but important step towards total circularity. However, if companies and their huge profits are to be held accountable, we need legislative protection.

How you can help: If you just want something fixed, third-party operators are actually much more likely to take on in-depth repairs. Letting companies like Apple (and your government) know that the right to repair is important to you helps to keep the pressure up, which will hopefully lead to more comprehensive solutions and better legislative protection. Also seek out creative ways to pass on devices once you’re done with them, such as donating or selling them online. Check out Harvard University’s handy guide to minimizing e-waste here.

The good news: Did you know that New York City contains more plant and animal species than Yellowstone National Park? With a population of around 8.5 million, tens of thousands of miles of concrete, and over two million cars, New York City might not be the first place you associate with a thriving wildlife population.

But this world-famous concrete jungle also boasts nearly 20,000 acres of natural park space and is home to animals as diverse as butterflies, bees, raccoons, foxes, bats, chipmunks, deer, piping plovers, coyotes, peregrine falcons, and bald eagles. This is thanks to years of conservation and urban greening efforts throughout the city.

The impact: Speaking to the New York Times recently, former parks commissioner and current president of Brooklyn Botanic Garden Adrian Benepe noted that the current level of biodiversity is like nothing he’s seen before in over half a century of service. “You are seeing miraculous occurrences of wildlife right in the middle of the city,” he said.

Did you know? Urban rewilding is a unique, modern, and extremely effective solution to increasingly jam-packed and sprawling city spaces. Creating green areas wherever possible (including on the sides and tops of tall buildings, bus stops, and even unused flyovers) helps to boost biodiversity, climate mitigation, and the overall wellbeing of city inhabitants.

How you can help: Get involved with NYC-based groups like the Re-Wilding Initiative, or volunteer through the “It’s My Park Initiative” via the City Parks Foundation. The Nature Conservancy is currently running several urban conservation projects in the city, focused on everything from green roofs to coastal resilience. Learn more about NYC wildlife here, including a calendar and location guide for aspiring animal-spotters. Read about the inspiring Freshkills Park project—the largest public park built in the city for over a century—here.

The good news: The Department of Wildlife at Humboldt State University in Arcata, California, is working on a long-term study to assess the potential for owls to replace rodenticides as natural pest control for vineyards and winemakers. The research team has placed approximately 300 owl nest boxes throughout the Napa Valley and will document the impact of this on rodent control. “It’s not just a pest control service, like a transactional thing,” professor Matt Johnson told Bay Nature.

The impact: Typical rat and mouse poisons are slow-acting and cause extremely painful deaths. They are also extremely toxic for other animals, including humans, and can build up in rodents’ bodies before dying—thereby exposing rodent-eating predators and scavengers like mountain lions and owls themselves to secondary poisoning.

Reducing the use of pesticides, in general, is thought to be optimal for, environmental, wildlife, and human health. And compared to other parts of the U.S., California already has relatively strict restrictions on pesticide use.

Did you know? Many owls are apex predators, and much like other animals at the top of the food chain, supporting a healthy population means more sustainable biodiversity overall. The barn owl, in particular, has impeccable vision and hearing and is able to locate and catch mice moving underneath plant life or snow out in the wild. Adults’ wingspans can reach around four feet, but they typically weigh just one pound and fly in absolute silence.

The U.S. Fish and Wildlife Service (FWS) recently reversed a Trump administration decision to open up millions of acres of west coast forest to logging. This is a huge win for the ultra-rare northern spotted owl, whose wellbeing and population size is also good indicator of overall environmental health.

How you can help: Because of barn owls’ nesting habits, artificial habitats are extremely easy to construct and likely to encourage an increased local population. Learn more about the Humboldt vineyard research project here and here, and read about the use of owls as pest control here. The Barn Owl Trust lists some fascinating facts about North American varieties here, and you can learn more about the northern spotted owl here.

The good news: New York City isn’t the only cultural hub promoting rewilding. Derby, a city in the east midlands of England, just approved what the council believes will be the “largest urban rewilding greenspace” in the country. The project is located in Allestree Park, the area’s biggest open space, and will be a collaboration between Derbyshire Wildlife Trust, Rewilding Britain, the University of Derby, and the city council.

The impact: The layout of the park is still undetermined but it will connect the Peak District with the Trent Valley via the Derwent valley corridor, creating a vast network of green spaces. Allestree will likely include the creation of new woodlands, grasslands, wetland, and scrubland, and potentially reintroduce key species like the water vole and harvest mouse.

Did you know? This rewilding project aims to both boost biodiversity and provide the surrounding community with the countless benefits of natural space. The project coordinators also hope that Derby’s example will inspire other cities to formulate similar plans, particularly at a time when national access to wild spaces and biodiversity levels are so incredibly low and the need for both is so high.

How you can help: Rewilding has huge potential to mitigate climate change, protect the already ravaged environment, and improve quality of life. Researching your local area and getting involved directly is the best way to help, as is undertaking rewilding efforts in and around your own home—from building bird and insect shelters to growing wildflowers. Support Rewilding Britain here, Rewilding Europe here, and Rewilding North America here.

Government Acknowledges That Boiling Lobsters Alive Is Unsuitable In The UK

Harvesting Wind… In the Ocean? And More Good Climate News