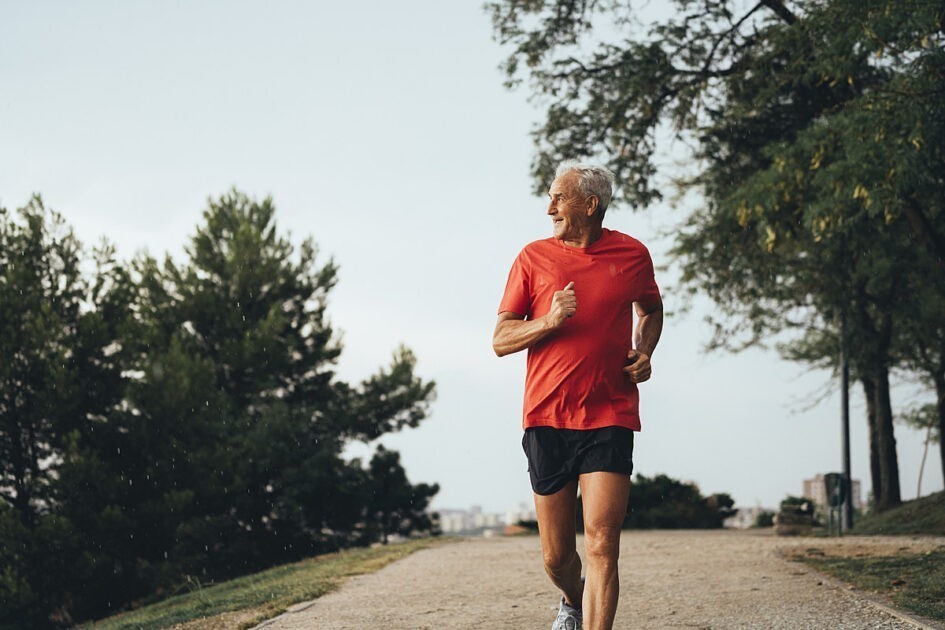 In a new study that looked at how metabolism fluctuates over the course of our lifetime, a revealing measure found that our metabolism remains largely constant between the age of 20 and 60. So if you’re looking to get lean, stay fit, or even lose weight, don’t blame your aging metabolism. Instead, take a look at your diet and exercise habits, and other lifestyle factors.

The study measured a key indicator of the amount of energy we burn both at rest or doing daily tasks like eating, and during our daily workouts, which is the amount of CO2 we exhale. This method reliably measures the number of calories we burn, since, by breathing, we exhale the carbon dioxide that gets broken down when cells use energy for fuel.

The study, published this month in Science, used data from 6,421 males and females ranging in age from eight days old to 95 years of age and found that people’s metabolisms don’t slow down with age, as we previously thought. Adjusted for weight, size, and activity, women and men have equal chances of keeping their metabolism healthy as they age, the study also found.

A lifetime of change

The researcher’s measurements looked at “total and basal energy” output over the years and found that the most dramatic slowing of metabolism happens between the ages of one and 20, as we grow into our adulthood height and weight, and then we hit cruise control, metabolism-wise, until 60. After that, it slows down again, but at a much smaller rate.

During the first year of life, the growing baby’s metabolism speeds up quickly as it grows fast until the baby reaches the age of 1, and then starts to slow year by year until the age of 20. So the takeaway seems to be that if we continue to eat healthily, a mostly plant-based diet high in vegetables, fruit, whole grains, nuts, seeds, and legumes, and we exercise and do strength training to keep up our muscle tone, we can enjoy a robust metabolism throughout most of our lives.

“These data suggest that the `middle-age spread’ that we all know about anecdotally or personally is not due to a change in intrinsic metabolism as had been long thought,” says Rozalyn Anderson, Ph.D., co-author of an article published alongside the study. She is a professor on the Geriatrics Faculty, Veterans Administration Hospital in Overlook Terrace, at the University of Wisconsin. “It is far more likely now that changes in behavior are at the root of it.” Essentially, this means that our diet and exercise, stress levels, and lifestyle behaviors (how much we sleep, drink, and our ability to cope with adversity) all play a role in how well we age.

Why your metabolism matters

Metabolism is the rate at which your body burns calories for fuel and as your energy needs chance so do your caloric burning rates. But if you think: As I get older I will inevitably slow down, that becomes a self-fulfilling prophecy, since your body doesn’t need to “slow down,” and in fact, studies show you actually need to add more strength training to your daily regimen to keep up your muscle tone as you age.

The body naturally loses about 1 percent of its muscle tone every year after the age of 30, studies have shown. This is called sarcopenia and the reason it impacts metabolism is that muscle burns more calories at rest than fat does, so the more you keep your lean muscle tone the more likely you will be able to stay fit, healthy and maintain your healthy weight as you age.

Building strong muscle and maintaining a healthy diet are the keys to keeping your metabolism going at the same rate at 40 or 50 or even 60 as you enjoyed at 20, this new study indicates. “Aging is not a disease. There are diseases of aging, but it doesn’t mean they are inevitable,” Susan Vannucci, RD, Ph.D. a wellness expert in New York City, who provides individual wellness counseling for individuals age 45 and up, told The Beet. She advises her clients to strength train at least three times a week and to eat a healthy diet.

Vannucci advises anyone in their 30s, 40s, and beyond to stay away from all processed food, especially junk food, and instead concentrate on an anti-inflammation diet, consisting mostly of plant-based foods. But eat them in their whole form since potato chips are plant-based but not healthy.

Bottom Line: Your metabolism doesn’t change much from 20 to 60. If you want to keep your metabolism high and keep your body burning at a higher rate of calories, then keep strength training and eating a healthy, plant-based diet.

The Top 20 Veggies with the Most Protein

Everyone who contemplates going plant-based has the same question: where do I get my protein? Simple answer: Vegetables! Contrary to the popular belief that you have to eat animal protein to get enough into your diet, one of the best ways to get protein is by eating vegetables. Animals provide protein because they’re fed a diet of plants that are high in protein, so if you cut out the middleman — or middle cow or middle chicken in this case — you can get the same protein just by going direct-to-the-source.

Is Milk Bad For You? The Truth About Dairy

How Kroger’s Simple Truth Brand Can Inspire Your Vegan Plate