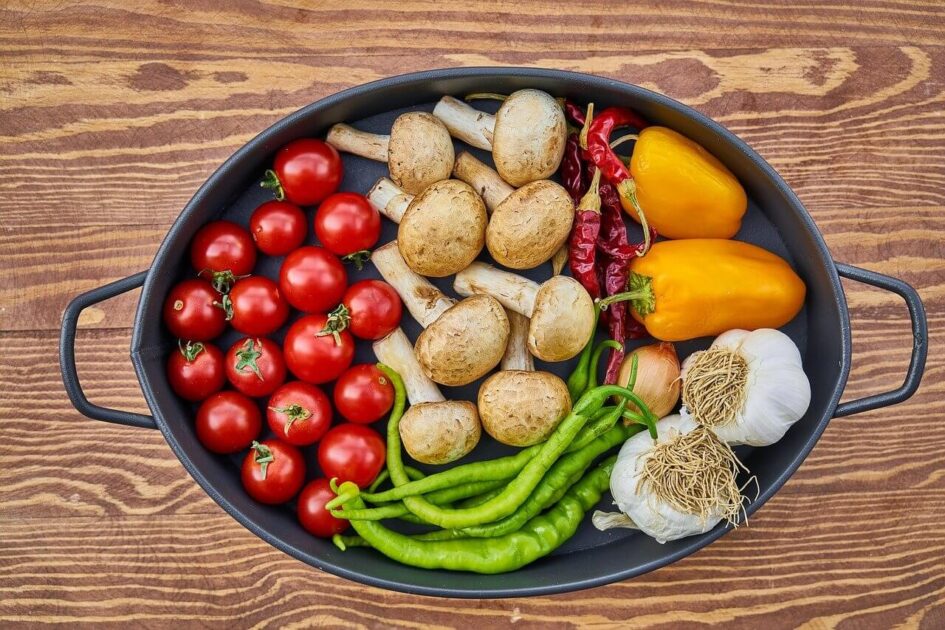 A fat-free, low-sodium, low-calorie, cholesterol-free, meat-free vegan staple seems like something out of the distant future. However, this vegan delight is right under your nose—or more aptly, right under your toes: mushrooms!

Exact nutritional value varies based on your mushroom of choice, but in general, edible fungi are high in protein, fiber, and minerals and contain all the amino acids that you need in your daily diet. The best part? Mushrooms provide all these nutritional benefits without any cruelty to animals.

There are roughly 25 readily available types of mushrooms, so choosing the right one can be tough. We’ll break down the best uses of ’shrooms available at many grocery stores and offer some tasty vegan recipes to try.

The ‘Cute as a Button’ Mushroom Works in Lots of Dishes The button mushroom is the baby sibling to the cremini and the portobello. They’re all the same species, just at various stages of growth. Button mushrooms are recognizable by their white top and tiny size, usually just an inch in diameter. Buttons are also called the common mushroom, white mushroom, and champignon, so keep this in mind when looking at recipes and shopping.

The button mushroom has a neutral flavor, described as mild and earthy. When cooked, it soaks up oils and spices, making it a perfect flavor- and texture-enhancer. These ’shrooms work as a great simple side when seasoned and sautéed in vegan butter, but they can also be used in an Asian-inspired dish like bok choy stir-fry or in a Southwestern barbecue dish.

These tender, mild mushrooms also make a much better addition to a vegetable kebab than the flesh of a dead pig. Pigs are social and smart, forming complex social relationships and recognizing their mother’s distinct voice. They can live to be about 10 or 15 years old, but the more than 75 million raised on farms in the U.S. per year are killed when they’re only about 6 months old.

The Cremini Mushroom Is Affordable and Packed With Flavor The cremini mushroom is known by several other names, too, the most common being chestnut mushroom and baby bella mushroom. Creminis and portobellos have a similar taste—a pleasant umami flavor—and a meaty texture.

Stuffed cremini mushrooms make great hors d’oeuvres, and the cremini pairs wonderfully well with caramelized leeks on toast for brunch. It can also make a cozy evening that much better when used in a vegan cream of mushroom soup.

The Portobello Mushroom Is Large and in Charge The portobello (spelled various ways) is almost always called just that. These mushrooms often grow to be about the size of a vegan hamburger, making them great for any summer cookout, as their meaty texture and umami flavor come out best when grilled. They can also be ground up and shaped into a patty.

Grilling up a vegan ’bello burger at the BBQ instead of one made from animal flesh is a tasty and compassionate choice. Cows used for beef are separated from their mothers shortly after birth. Farmers press hot irons to cows’ skin, , and castrate the males, usually without any painkillers. Cows are social beings, and after farmers take their babies, mother cows cry out for their calves for days. Help these sensitive animals by opting for a portobello mushroom burger instead of a hamburger.

The Versatile Oyster Mushroom Can Do It All Not only do oyster mushrooms work wonderfully well in many types of cuisine, these toadstools have also been found to remove oil from contaminated soil—plus, they can be used to make vegan leather. There’s not mushroom for improvement there!

While some mushrooms do have a fishy flavor, the oyster mushroom is only named after the shellfish because of its similarity in appearance. Its large size and tenderness make it great for frying, and its mild flavor makes it an unobtrusive addition to tacos. Until 1982, traditional shiitake mushrooms were grown using the ancient Japanese method of slicing shii trees and integrating shitake spores to latch onto the grooves. With modern innovation, people can now grow these mushrooms in something as simple as hardwood chips inside of a plastic bag.

Shiitake mushrooms are originally from East Asia, making them a staple in dishes like miso soup, Buddha’s delight, and modern fried rice and tofu scramble. The shiitake has a rich, buttery flavor and a tender, chewy texture when slow-cooked, so this umami flavor-packed  mushroom is great in Western stews and sauces as well. The lion’s mane mushroom grows in oblong clusters and goes by the alias of pom pom mushroom or bearded hedgehog mushroom, depending on location. While native to Europe, this strange looking fungus is used in Chinese medicinal teas and is said to boost brain power. The flavor of lion’s mane is apparently similar to that of lobster, making this mushroom a great choice in “seafood” recipes, like this crabless stuffed pepper dish.

Lobsters, crabs, and other sea animals aren’t so different from humans and other mammals—they communicate with one another, explore their surroundings, and can feel pain. Lobsters may even be more sensitive to pain than humans are, as their nervous system is unable to go into a state of shock. This means that they likely feel everything when being cut into or boiled alive. Thankfully, mushrooms like the lion’s mane and other meat-free options provide salty flavor reminiscent of the sea with no harm to ocean animals.

Time to Get Cookin’

The versatility of mushrooms makes them a great addition to any type of cuisine, and their nutrients and animal-friendly benefits prove that they really are fungis once you and learn how to use them to their full potential!

When you go vegan, you save nearly 200 animals’ lives each year, including problem-solving pigs, social cows, and sensitive lobsters. Encourage others to stop putting animal-derived foods on their plates by giving them a copy of PETA’s vegan starter kit, and check out our 3-Week Vegan Challenge for more tips on eating and living compassionately.