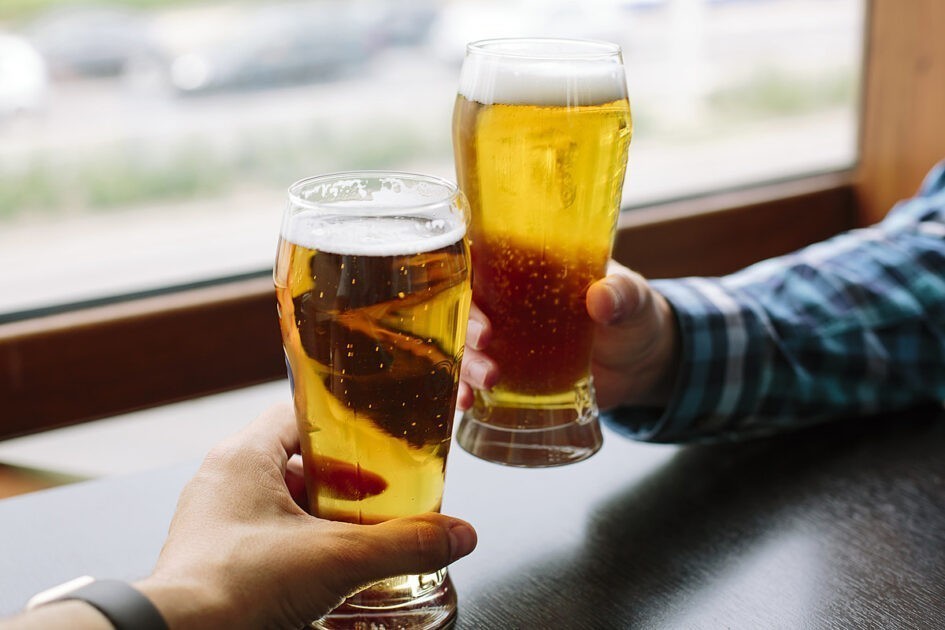 Monday night football has arrived, which means that one game night beverage is sure to show up on the menu: Beer. Contrary to widespread assumptions, not all beer is vegan, with many brewing companies using animal products in the finishing process. Just in time for football season, food technology company Chinova Bioworks launched a research initiative to prompt a new vegan mushroom-based fining technology. Teaming up with the New Brunswick College communautaire du Nouveau-Brunswick (CCNB), the company developed a proprietary mushroom fiber that will replace animal-based fining agents.

Similar to wine, the fining process of the alcoholic beverage often uses animal products including pig’s stomach enzymes and lobster shell chitin. Chinova’s new white button mushroom fiber, entitled “Chiber,” will remove the need for conventional animal-based fining agents in the beer-making process. Typically, beer only contains four key ingredients including water, grains like wheat or barley, hops, and yeast. Some brewing companies also add a fining agent derived from animals during the production and filtering process. Chinova aims to redesign this process across the industry.

“People are searching for vegan and plant-based options for every aspect of their lifestyle, so we are committed to innovating and providing sustainable solutions based [with] our white button mushroom fiber technology,” Chinova Bioworks co-founder and COO David Brown said. “Alcoholic beverages, particularly beer, are plagued with the use of animal-derived and synthetic ingredients, and we believe we can make a big impact here with Chiber.”

Across the beer industry, companies practice the fining process to create a clearer and brighter appearance. The fining process is similar to the wine fining process, making some wines not vegan. The fining ingredients include carmine from cochineal insects, pepsin from pig stomach, and isinglass from fish bladders. Chinova’s Chiber will provide the entire industry with a plant-based alternative to keep beer vegan when an unnecessary animal-based fining agent can be avoided.

The sustainable and animal-free product has been in development for nearly five years. Chinova Bioworks launched in 2016 aiming to fill a gap in the food and beverage industry and provide clean-label ingredients to replace typical preservatives and artificial additives. The mushroom-based fiber is currently used as a natural food preservative, but the company decided to test it in the fining process. Currently, the Chiber agent is showing to work nearly eight times faster at settling yeast than typical fining agents. Following the successful tests, the company is hoping to distribute the Chiber product by early 2022.

The company also claims that the Chiber fining agent can leave behind residual antimicrobial benefits, keeping the final product fresher for longer. The fining agent is expected to carry similar qualities as its initial preservative ingredient.

“Chiber is a natural fiber extracted from the stems of white button mushrooms and provides the same benefit as other dietary fibers,” CEO and co-founder of Chinova Bioworks Natasha Dhayagude said in April when discussing the initial food preservative testing. “While Chiber’s main use is to enhance the quality and shelf life of food and beverages, it also provides nutritional value to consumers at the same time, as it is a fiber. Chiber is the first ingredient of its kind to have both preservation and nutritional benefits.”

Chinova is entering the brewing industry at a time when many companies have become dedicated to producing sustainable and plant-based products. Irish beer giant Guinness announced that it would remove the fish-based isinglass from its filtration process in 2017. The otherwise vegan beer used the isinglass as a fining agent, similar to many wine companies.

Multiple alcoholic beverages may appear vegan at first glance, but many brands practice fining filtration with animal-derived products. Even though many wine and beer brands are moving away from ingredients such as isinglass, many have failed to abandon the animal-based fining agents. Vegan-friendly beer brands include Bud Light, Carlsberg, Corona, Heineken, Coors Light, and many more.

To be certain that about vegan wine, beer, and liquor brands, check out this all-encompassing guide.