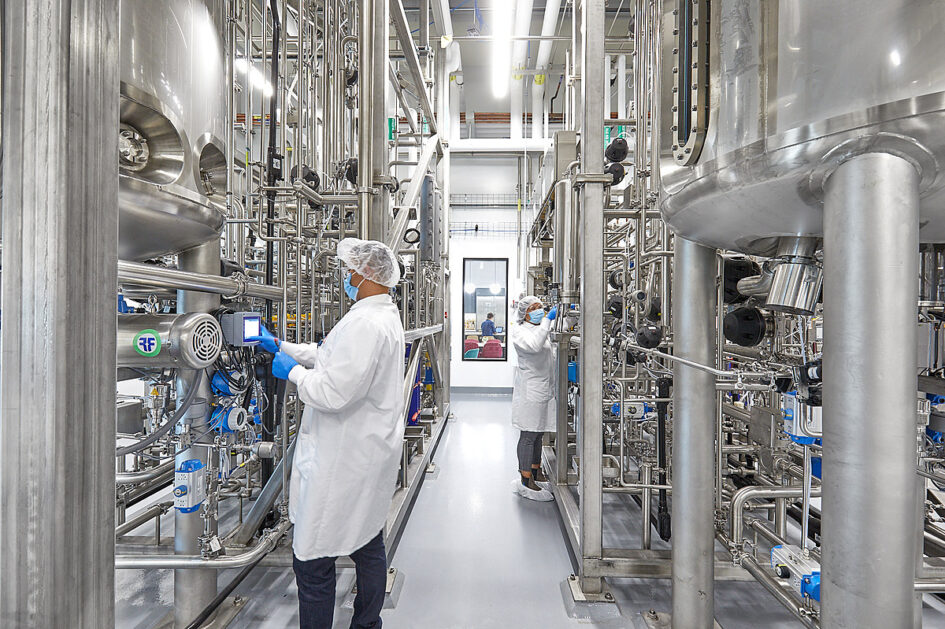 UPSIDE Foods – the world’s first cultivated meat company previously known as Memphis Meats – just announced that it will open its biggest, most productive manufacturing and development center. The new facility, aptly named EPIC, contains enough of the company’s custom-made, patented cultivators to produce 50,000 pounds of cultivated meat a year. The company predicts that the facility will eventually have the potential to produce approximately 400,000 pounds per year, aiming to provide cultivated meat to consumers nationwide pending regulatory approval.

“Today, our team at UPSIDE has made history,” Senior Director of Engineering at UPSIDE Dr. Konrad Müller-Auffermann said. “This facility is a gamechanger not just for UPSIDE Foods, but also for the entire food system. I’m so proud of our team for helping to define the future of food, and I can’t wait to share our delicious, real meat with the world.”
Beyond production expansion, the company intends to maximize its product development at the new EPIC center. The company announced that it will begin working on new types of meat, more effective methods, and research new product formats. The EPIC center will employ nearly 50 staff members in several fields including maintenance, quality & food safety, engineering, general plant management, and production.

Founded in 2015, UPSIDE Foods established itself as the first cultivated meat company worldwide, entering a completely new territory within the alternative protein market. A recent report from Facts and Factor found that the cultivated meat market is expected to reach $248 million by 2026, more than doubling its 2020 valuation of $103 million. For years, UPSIDE has paved the way for the cultivated meat sector with investments from both Tyson Foods and Whole Foods Market. The company also produced the first cell-based chicken and duck. Now, UPSIDE is preparing for its commercial debut.

“When we founded UPSIDE in 2015, it was the only cultivated meat company in a world full of skeptics. When we talked about our dream of scaling up production, it was just that — a dream,” CEO and Founder of UPSIDE Foods Dr. Uma Valeti said. “Today, that dream becomes a reality. The journey from tiny cells to EPIC has been an incredible one, and we are just getting started.”

Within the United States, acclaimed Michelin star chef Dominque Crenn has recently partnered with UPSIDE Foods. The renowned chef’s signature restaurants Atelier Crenn announced that it will become the first US restaurant to serve the food-tech company’s lab-grown chicken. Crenn removed all meat except fish from her menus in 2018, making the cell-based chicken the first chicken product featured on her menus in three years. UPSIDE also will invite Crenn to join the company’s team as a culinary counsel for future development.

“When I tasted UPSIDE Chicken for the first time, I thought, this is it. This is the future of food. The look, smell, and sear—UPSIDE Chicken is just delicious,” Crenn said. “People are finally waking up to the downsides of conventional meat production, which led me to remove meat from my menus several years ago.”

Hinting at future regulatory approval, the United States Department of Agriculture (USDA) just invested in the cell-based meat industry last month. The government announced that it will award Tuft University $10 million to develop a National Insitute for Cellular Agriculture to lead the way of cultivated meat research and development. The facility will become the first cultivated protein research facility within the United States. The grant intends to help Tufts maximize the sustainability, production capacity, and efficiency of cultivated meat into the future.

A report from CE Delft explained that cultivated beef production is projected to reduce air pollution by 93 percent and the broader climate impact by 92 percent when compared to conventional animal agriculture. The Tuft research facility will aim to provide auxiliary information and research to the development of the cultivated meat sector to better combat climate change.

“This is a major step forward in our work to tackle climate change, infuse resiliency into our food systems, and build a stronger, more sustainable future,” US Representative Katherine Clark (D-MA) whose district includes the Tufts University of Engineering. “I am thrilled that this historic grant will be housed in the 5th District at Tufts University, a true leader in cultivated meat research, and am eager to see this transformative research brought to life.”

The cultivated meat industry is rapidly entering the spotlight as investors worldwide shift their attention to the growing alternative protein sector. Celebrities including Ashton Kutcher and Leonardo DiCaprio have recently announced investments in several cultivated meat companies. DiCaprio announced that he supported both Aleph Farms and Mosa Meat, becoming a strategic advisor to both companies. Kutcher invested in MeaTech 3D, pledging to help the company founded in 2019 maximize its distribution range when its proprietary meat alternative gains regulatory approval.

“We are delighted to partner with MeaTech and assist it in its journey to become the market leader in cultured meat production,” Kutcher said. “We are excited about MeaTech’s innovative technologies, which we believe position MeaTech to be the leader in industrial-scale production of cultured meat, a key for a more sustainable and clean meat production.”

The world of cultivated meat is extremely new, but within the United States, companies and investors are preparing for widespread commercial growth. UPSIDE Foods’ EPIC facility – located in Emeryville, California. – officially opened on November 4. The company hosted a ribbon-cutting ceremony featuring Crenn, 2021 Mayo Dianne Martinez, and investor Richard Branson. While people can only peer into the facility from outside, for now, the company revealed that it will host virtual tours beginning in January 2022.

Nichole Lewis Lost 120 Pounds and Improved Her Mental Health: How She Did It