This Realistic Vegan Milk Aims to Shake Up the Dairy Aisle 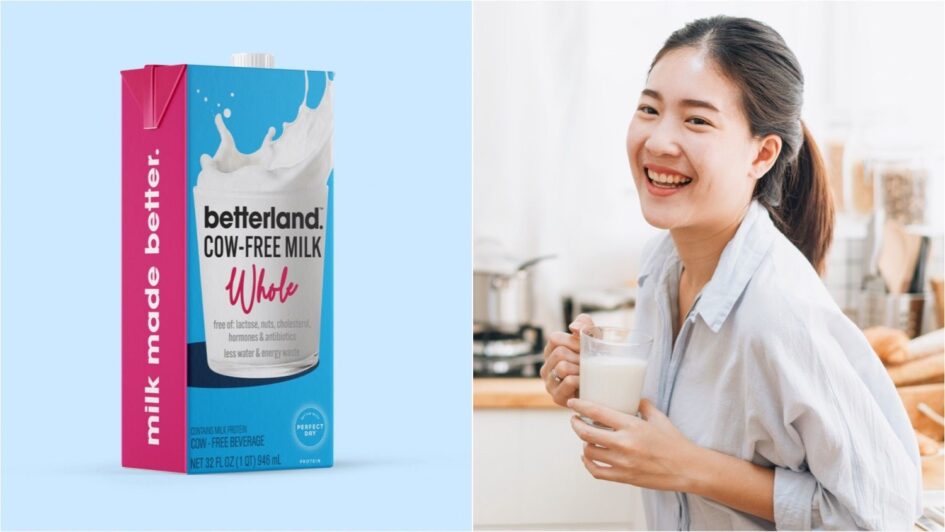 For a few years now, animal-free milk—vegan milk that’s identical to the stuff that comes from a cow—has been the talk of the food tech space. Soon, you’ll actually be able to buy it, thanks to a startup that’s looking to disrupt the milk market and a food technology company that grows dairy-free whey in bioreactors.

Betterland Foods, a new food-tech company, will be making its debut at the big Natural Products Expo West trade show in Anaheim, California, this March. Its first products are animal-free milks—in the varieties “Whole” and “Extra Creamy”—that are “virtually indistinguishable” from traditional cow’s milk because they contain the actual protein that makes moo juice unique, along with MCT and sunflower oil. As a result, the product tastes like milk—plus, it froths, steams, whips, and provides protein and fat to baked goods.

This is because Betterland Foods’ milk is made with whey protein, but not one that comes from an animal. It was developed by Perfect Day, a food-tech company known for making animal-free dairy proteins for products like ice cream and cream cheese. And, it’s created through the ages-old technique of fermentation.

How to create realistic cow’s milk without the cow

Betterland Foods’ co-founder and CEO, Lizanne Falsetto, launched the Think! protein bar company back in ’90s, then sold it to Irish nutrition brand Glanbia for $217 million in 2015. After that, she kept a close eye on the protein innovation space.

“I knew that I wanted to help create protein-based products that not only tasted good, but were also healthier for people and kinder to the environment,” says Falsetto. The protein industry veteran thought of something that you can find in most refrigerators: milk.

“I love milk—I grew up drinking it at nearly every meal. However, as I got older, I stopped having milk because I was told it was bad for me,” says Falsetto. She knew milk offered a good source of protein, but learned that industrial dairy is detrimental to the planet.

Eventually, she caught on to the exciting developments that Perfect Day’s founders, Ryan Pandya and Perumal Gandhi, were innovating in the lab, and was inspired to re-enter the food industry. Using their animal-free whey protein, Falsetto and her team developed their Betterland Foods’ two realistic vegan milk flavors over a nine-month period and tried 10 recipes for each flavor before they were ready for the production line. The milk is lactose-free, but because it includes animal-free whey protein, anyone with a whey allergy shouldn’t drink it.

“For me personally, I knew we’d nailed it when my head taste testers (my two kids) said they preferred it over traditional cow’s milk—and they can be ruthless,” says Falsetto.

But, “while plant-based milks certainly have their place, they generally don’t have the protein levels or sensory performance characteristics of cow milk,” says Falsetto.

This is true, but Betterland Foods’ focus on food-tech makes it a contender to establish itself as part of the new wave of precision fermented-based products.

Precision fermentation could be part of the answer to the question of how we can produce food that sustains both us and the planet. Animal agriculture is a notoriously resource-hungry industry that’s responsible for more than 14 percent of all human-caused greenhouse gas emissions, per the Food and Agriculture Organization of the UN.

But, through precision fermentation, microflora—which can be yeast, algae, or in Perfect Day’s case, fungi—can be manipulated into creating customized molecules that play a role in making food taste good, like proteins and fats. And, this form of production is significantly more efficient than raising a cow for milk or beef.

“Plain cow’s milk is considered one of the ‘holy grails’ of protein product development because it’s so difficult to recreate,” explains Perfect Day co-founder Gandhi. This is because its complex flavor is affected by a multitude of factors, including the cow’s diet, seasonality, and how the milk is processed. But, protein also plays a big role in milk’s texture and mouthfeel.

“Protein also impacts milk’s whiteness and opacity, which also influences your perception of its taste and texture,” adds Gandhi. “Because our protein is identical to the protein found in cow’s milk, it can replicate this complex functionality, unlike plant-based proteins.”

So, how’s it done? The Perfect Day team “programs” its microflora to make whey protein, then puts it in a large, stainless steel fermentation tank that doesn’t look too different from the kind used to brew beer, and adds a proprietary blend of sugar and minerals for it to feed on. The microflora ferments the sugar to make whey protein, and it’s then filtered to create a pure, cow-free whey protein powder that can be used to make milk, or ice cream. The process requires only days to complete compared to the several years that it takes to raise a cow to produce milk.

The planet-friendly innovation in the dairy aisle

Dairy-free milk alone accounts for 35 percent of the US plant-based food market. Globally, it’s the health and sustainability-minded younger generations that are more likely to buy alternatives compared to older ones. But, many households are still exclusively on Team Dairy, according to a study published in the Journal of Dairy Science, which isn’t great news for the planet. However, flexitarians households—the ones that buy both vegan and animal products—are on the rise and their buying power is getting stronger. And, that’s where the opportunity to disrupt the milk market worldwide lies.

Betterland Foods is the first company to bring animal-free milk to market, but many startups across the world are racing to launch their debut products, too. These companies include New Zealand’s New Culture, Belgium’s Those Vegan Cowboys, the UK’s Better Dairy, Israel’s Remilk, and South Africa’s De Novo Dairy. Using microbes and yeast to produce an arguably more efficient version of animal products also extends beyond the dairy aisle—in the near future, even your breakfast platter of bacon and eggs might be made this way.

Falsetto says to expect more innovative new products that taste delicious but have a significantly smaller environmental footprint, from Betterland Foods. What those products will be is confidential for now, but rest assured that they’ll disrupt other unsustainable categories, like dairy.

The Perfect Day team has big ambitions, too. Precision fermentation has enormous potential to disrupt traditional food categories that reach beyond the dairy aisle.

You can now get a Carbon Negative Vegan Chocolate Shake

The Most Realistic Vegan ‘Meat’ Alternative In The UK

Could This Be The Most Realistic Vegan Fish Yet?

The Wine World Is About to Get a Big Shake-Up