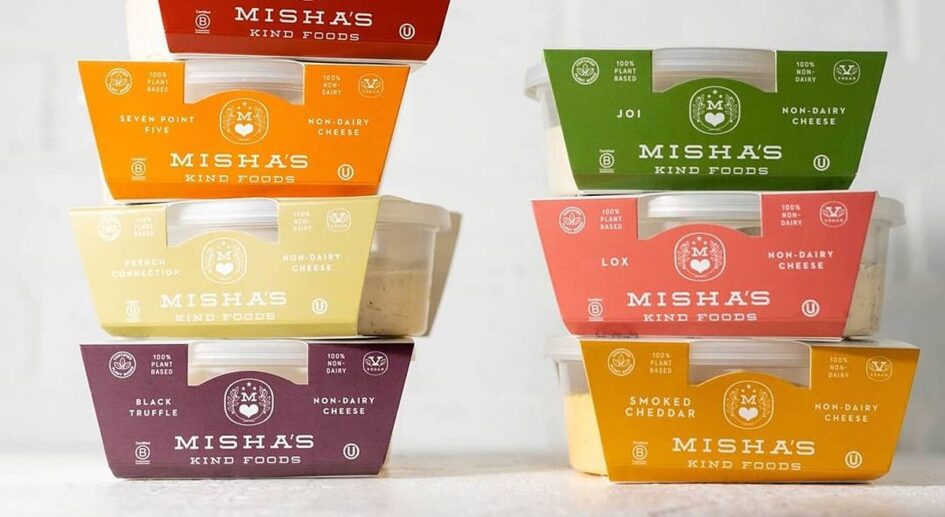 The mission of Misha’s directly aligns with our values. When we first discovered Misha’s we found some immediate synergies,” MVP Co-founder Jay Brown said. “We embrace companies that value sustainability, empowerment, inclusivity, accessibility, convenience, health and wellness, and personal expression.”

Chef Ian Martin and Aaron Bullock founded Misha’s Kind Foods in 2019, motivated by the growing demand for plant-based dairy. Misha’s product line includes vegan cheese spreads using cashew and almond milk blends, made to replicate the taste of conventional dairy cheese with a mixture of herbs and spices. The company intends to use the investment money to bulk its product selection, expand its team and company, and increase its retail presence.
Misha’s Kind Foods currently offers eight flavors for its vegan cheese spreads including Smoked Cheddar, Ricotta, and Black Truffle. Beyond the conventionally flavored cheese alternatives, the company also developed exciting, experimental flavors including Seven Point Five made with jalapenos, strawberries, and habanero; French Connection which blends grains of paradise, herbs de Provence, and black olives; and Lox which contains capers, dill, and roasted carrots.

The company plans to continue its expansion following this successful funding round, aiming to serve a larger consumer base. Misha’s Kind Foods boasts a deeply healthy product that avoids vegetable oils, soy, fillers, and starches to create a clean plant-based cheese. Both Martin and Bullock anticipate further growth that will push their mission to undercut the dairy industry.

“These investors, and their enthusiasm, not only confirm the quality and excellence of our artisan cheeses, but they also align with our long-term vision and mission,”  Bullock said. “We are here to serve the large community of cheese lovers, plant-based and not. Everything we make is kind to your body, kind to the planet, and kind to your wallet.”

“I’m confident having these investors at the table will be vital to the future growth of the company as they bring valuable cultural instincts, branding knowledge as well as operations and growth expertise.”

LSP founder Lisa Shamus discussed her struggle with non-dairy cheese, claiming that most products she tried “tasted terrible.” Shamus decided to try new vegan cheeses once her daughter needed to stop eating dairy, leading her to Misha’s Kind Foods. The branding entrepreneur announced that once she discovered Misha’s in Los Angeles, she believed the company has immense potential in the growing plant-based dairy market.

“I’ve built successful brands and products for decades,” Shamus said. “With Misha’s, I saw the opportunity to invest not just in one item, but in a team with a vision to create an entire category that has tremendous possibilities. As we begin to expand our manufacturing, marketing, and distribution, Misha’s will be a leader in delicious dairy-free products.”

Jay-Z is no stranger to vegan companies: Through MVP, the iconic musician helped Impossible Foods raise $300 million dollars during an investment round. The superstar also invested in vegan oat milk company Oatly through his entertainment agency Roc Nation. Jay-Z’s investment was joined by vegan actress Natalie Portman, Oprah Winfrey, and several others.

The musician also invested in the vegan cookie company Partake earlier this year. Founded by ex-Coca Cola executive Denise Woodward, Partake received nearly $4.8 million in investment during its Series A funding round. Alongside Jay-Z, investors included Rihanna, Seattle Seahawks linebacker Bobby Wagner, and CircleUp Growth Partners. Woodward announced that over half of the company’s investments came from Black investors, which she explained was intentional.

“I feel very passionate about continuing to increase wealth in the Black community wherever possible and so having investors on board that understand those missions and goals is really important to me,” Woodward explained at the time.