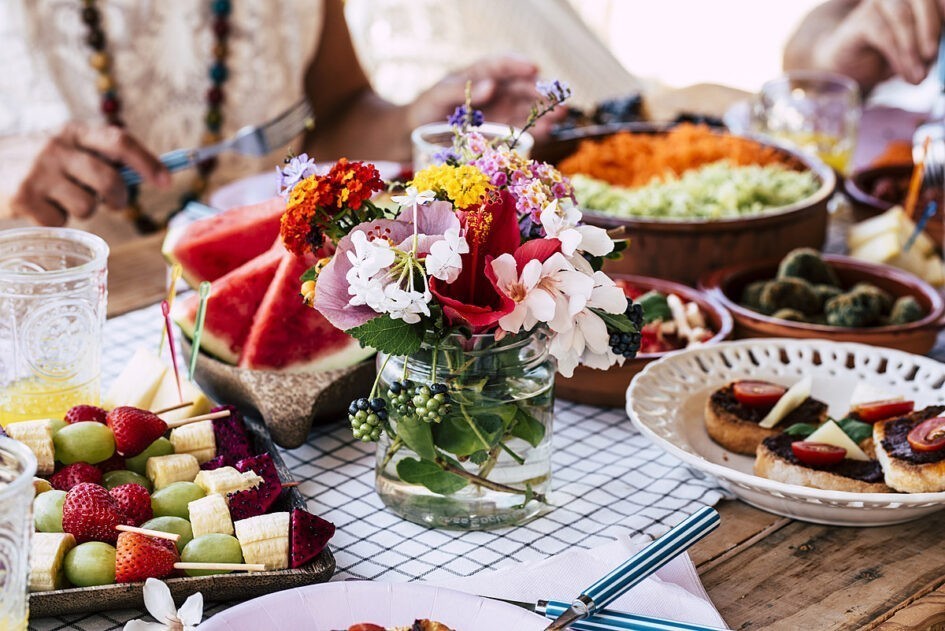 Packing your bags and heading to Hawaii? Grab your vaccine card and consider trekking to the island of Maui where a plant-based paradise awaits you. And there’s one specific vegan-friendly hidden-gem restaurant that shines bright against the backdrop of South Maui’s breathtaking sunsets and snorkel-ready beaches: Wailea Kitchen, an open-air restaurant nestled atop a tennis club with beautiful skyline and ocean views.

While Maui has a host of plant-based food options, the most common being smoothie bars and casual daytime cafes, finding a fun spot for dinner with bountiful dedicated vegan options, especially in the Wailea / Kihei area, has been pretty much nonexistent—that was until Wailea Kitchen came along.

Beyond having over 20 dedicated vegan items on the menu, owner and chef Chef Christopher Malik Cousins has made it a point to source local produce and other items as much as possible, putting farm-to-table in practice with a creative and playful plant-forward menu.

Getting there: Finding Wailea Kitchen is tricky—good thing you read this first so you know exactly how to find it. As you’re driving up Wailea Ike Pl., you’ll turn onto (the other Wailea Ike Pl.) to immediately park in the lot which has small nearly missable signage for Wailea Kitchen. You’ll cross the small street to find a lush, green walking path flanked by two tiki torches that you take down to the restaurant. The mission to get there is worth it—and you can even take a moment for a photo op on the path as you descend.

Plant Yourself: One of the best time’s to go to Wailea Kitchen is for their happy hour, which is offered daily from 4 – 5 p.m. Not only is it 20 percent off everything during happy hour—which matters since food and drinks are not cheap, but then again nothing in Hawaii is—but you’ll also be there prime time to watch the sun start to go down over the ocean views. Also, since the restaurant is large and open, it’s a great place for a large group or dinner party which they can easily accommodate.

Order for the Table: Wailea Kitchen’s menu is riddled with items to share. At the top of your list should be the Nacho Daddy. This heaping nacho plate hits all the right tasting notes – your taste buds will revel in house-made chips, vegan chipotle cheese, cashew cream, papaya hot sauce and topped with jalapeños. You’ll also appreciate that you can optionally add on plant-based protein, choosing from Beyond Beef, Soy Curls, or BBQ jackfruit.

Here’s something that non-vegans and plant-food skeptics will appreciate: There’s no fake cheese taste here thanks to their creative made-in-house plant-based cheese and cream. Also, the Sunflower Fries served with a side of their housemade vegan ranch are heavenly.

Don’t Miss: There are a few things not to miss, including trying one of their Island-inspired cocktails which taste as beautiful as they look, like the Dragonfruit Margarita. Also, the Kitchen Quesadilla is a creative twist on a traditional quesadilla packed with veggies and topped with vegan almond chipotle cheese. Vegan Pesto Primavera with a white wine vegan pesto sauce is a rich and creamy treat. The WK Tacos with jackfruit as the “meat” are bursting with flavor in every bite.

Leave Room for: Wailea Kitchen is one of the few sit-down restaurants in Maui with a deep selection of plant-based desserts. In fact, the only desserts on the menu here are in fact vegan. Don’t worry, you’re not relegated to just sorbet, rather, there are a host of rich and flavorful options that rotate based on what’s in season, like Blueberry Cheesecake, Banana Cream Pie, and a Chocolate Tart to name a few. Plus, there’s always a selection of coconut-based ice creams.

Brace Yourselves Europe and US – APAC Will Catch Up, According to Foodland Ventures