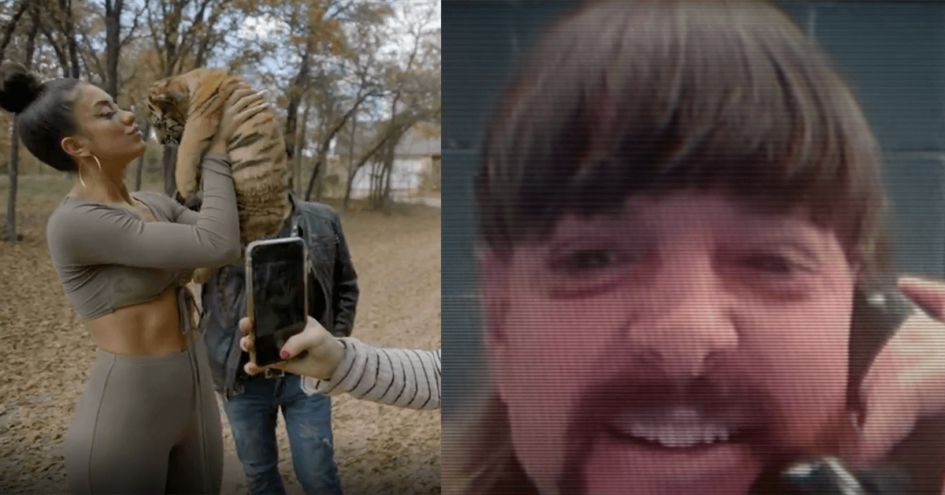 It’s been a big year for big cats and a bad year for the bad guys of Tiger King. Thanks to season one of the hit Netflix docuseries, which PETA Foundation Deputy General Counsel for Captive Animal Law Enforcement Brittany Peet appeared in, the world got to know Joseph Maldonado-Passage (aka “Joe Exotic,” whose roadside zoo PETA had targeted for years) and learned of the animal abuser’s 2019 murder-for-hire and wildlife-crimes convictions. But what about the other villains the self-proclaimed “tiger king” shared his 15 minutes of infamy with—or the big cats they each exploited? Will Netflix’s upcoming Tiger King 2 tell of Bhagavan “Doc” Antle’s, Jeff Lowe’s, or Tim Stark’s fall from grace? Will it accurately depict Carole Baskin and the important work she and her accredited sanctuary do for captive big cats? Will it touch on how the dominos of the big-cat cub-petting industry continue to fall as a result of PETA’s victories in the courtroom?

As you gear up for Tiger King 2’s premiere, relive the excitement of all the times we’ve won big for big cats and others since the show’s debut season first aired.

For years, Stark tore big-cat cubs away from their mothers, amputated their claws, and used them as photo props to line his pockets. But shortly after Tiger King aired, PETA caught up with him: In a precedent-setting victory against Stark and Wildlife in Need (WIN), his now-defunct roadside zoo, it was held that prematurely separating big-cat cubs from their mothers, declawing them, and using them for public encounters violate the federal Endangered Species Act (ESA).

As part of our victory in that ESA case, 25 big cats were transferred from Stark and Lowe, his former business partner, to accredited sanctuaries. Stark, his ex-wife, and WIN were also permanently barred from owning or possessing big cats without court approval and now owe us more than $753,000 in legal fees and costs. With help from our friends at The Wild Animal Sanctuary in Colorado, PETA seized three juvenile lions from animal exploiter Jeff Lowe’s now-defunct Greater Wynnewood Exotic Animal Park, two of whom are pictured here enjoying their new accredited sanctuary digs. The rescue follows our Endangered Species Act win against Lowe’s former business partner Tim Stark, who transferred the lions to Lowe in violation of court orders. At The Wild Animal Sanctuary, the three rescued lions now enjoy acres to roam and receive the proper care that they deserved all along.

The U.S. Department of Justice (DOJ) cited PETA’s ESA victories—including in litigation against Lowe—in its own lawsuit against him …

It’s official: There are NO tigers left at Tiger King Park!

69 big cats have been seized for “ongoing Endangered Species Act violations”, just in time for #EndangeredSpeciesDay.

PETA provided some of the key evidence cited in the government’s warrant. https://t.co/GcfpN9QDTn

… which led officials to seize more than 69 protected big cats (lions, tigers, lion-tiger hybrids, and a jaguar) from Tiger King Park. The DOJ’s search and seizure warrant was based in part on evidence obtained by PETA’s lawyers in January 2021, including admissions that they had elicited regarding ongoing big-cat breeding (in violation of a court order) and the “neurotic behavior” of a jaguar as well as testimony elicited from Lowe that he had housed big-cat cubs and juveniles in his home and let employees take the cubs home with them. Authorities later transferred 61 other animals (including a porcupine, a camel, bobcats, lemurs, and raccoons) Lowe and his wife, Lauren Lowe, had signed over to the government.

‘Doc’ Antle to Face the Courtroom—and the Consequences

Notorious wildlife exploiter Antle, another Tiger King villain, was indicted in October 2020 and charged with one felony count of wildlife trafficking, one felony count of conspiracy to traffic in wildlife, and 13 additional misdemeanor charges, including cruelty to animals, in Virginia. His charges stem from his alleged involvement in trafficking in lions with the owner of the now-defunct Wilson’s Wild Animal Park, Keith Wilson, who faces similar charges. Virginia officials seized more than 100 animals from the roadside zoo, a seizure that was triggered by complaints PETA filed with the state.

Most recently, after PETA reported that a Zoological Wildlife Foundation (ZWF) visitor had been bitten by a lion cub being used for photo ops, the U.S. Department of Agriculture issued multiple critical citations to the shady roadside zoo. ZWF’s owner, felon Mario Tabraue, was sentenced to 100 years in prison after he was busted for using his exotic-animal business as a front for a drug-smuggling operation and was implicated in the dismemberment and burning of the remains of a former federal informant. (Tabraue was released after serving only 12 years when he testified against other criminals.)

“My souvenir was I got bit by one of them.”

Nearly every animal abuser featured in Tiger King is now in custody, out of business, or facing lawsuits or criminal charges.

The use of big cats for photo ops has plummeted following the first season Tiger King, which makes us hopeful that season two will rightly use its platform to open the public’s eyes to the abuse and neglect of big cats and other animals, not just the personalities of those who exploit them. Be a True King or Queen for Tigers

Tiger King shone a light on the cruel tiger-cub petting industry, and it probably left you wondering what you can do to help prevent these animals from being exploited. To help end public contact with tigers and other big cats as well as private breeding and possession of them, please let your U.S. representative and senators know that you support the Big Cat Public Safety Act, which would end big-cat cub petting and private ownership of dangerous big cats:

And remember, helping animals trapped at shoddy roadside zoos and other highway hellholes can be as simple as staying away from these facilities. Please, never support abusive animal shows or exhibits.