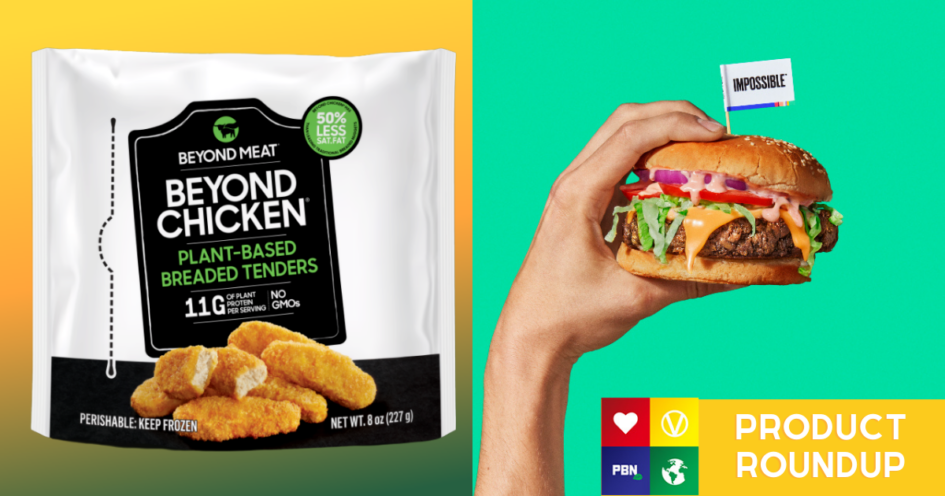 In the plant-based food sector this week, there are some juicy releases from Beyond Meat,  Impossible Foods, and Aldi. And, for coffee fans, stay tuned for big news from Starbucks and Alpro.

Here are the top seven recent food drops to look out for across the globe.

Beyond Meat’s much anticipated vegan chicken Tenders set for release

Customers can soon get their hands on Beyond Meat’s Beyond Chicken Tenders, following a successful launch across US restaurants earlier this year.

Launched this summer, the vegan meat giant will unveil the fava bean and pea-protein-based products in October.

They’ll be sold in ‘prominent’ retail chains, including Walmart. And, in 70 percent more stores than those offering the Beyond Breakfast Sausage Patties.

The chief growth officer at Beyond Meat is Deanna Jurgens. In a statement, they said: “Following the success of our plant-based chicken in restaurants, fans were eager to get their hands on a retail product that’s readily accessible and can be cooked at home anytime.

“We’re thrilled to be answering consumer demand by launching Beyond Chicken Tenders at prominent retailers nationwide, continuing our momentum in the plant-based poultry category.”

Fellow global leader in vegan meat, Impossible Foods, made its debut in the Middle East this week.

Select restaurants across Dubai and the United Arab Emirates are set to serve the Impossible Burger from October 1.

The company’s president, Dennis Woodside, says the products are made for ‘every cuisine and culture’. Woodside added that they couldn’t be more excited to launch in the region.

International coffee giant Starbucks is testing a new whipped cream topping made from lentils, according to reports.

Until now, vegan alternatives to whipped cream have been unavailable from the chain – apart from in the UK.

However, expansion is coming soon, says Yahoo! Life – as the new product is being tested at two locations in Seattle. While the new whipped cream is currently available at the outlet on 1350 156th Ave. NE in Bellevue, Washington.

But the other location set to serve it is reportedly ‘undisclosed’.

Via its Facebook account, it posted a product image of the latest addition to its popular vegan Plant Menu.

‘Who said vegan needed to be boring (and expensive)? Not us!’, the company said. Moreover, customers can find the products in-store now.

LEON Restaurants, a fast-food chain based in the UK, has unveiled a new addition to its Autumn menu.

The Ste*k Wrap features a vegan alternative to steak inside a Khobez flatbread, with onions, peppers, rocket, and a creamy pink peppercorn mayonnaise.

It comes as the chain has witnessed a boost in vegan sales across its more than 60 outlets. For example, vegan burgers outsold their meat counterparts at a high street store last week.

One Planet Pizza and THIS debut Thin and Crispy range

Plant-based pizza company, One Planet Pizza, is launching its brand new range of Thin and Crispy pizzas. Moreover, it includes the UK’s ‘first’ vegan Hawaiian pizza to be stocked on the retail market.

Upon joining forces with vegan meat brand THIS, the range will feature its iconic THIS Isn’t Bacon lardons.

Additionally, all the pizzas in the line feature vegan cheeze, and boast 25 percent than other leading brands.

One Planet Pizza’s co-founder Joe Hill said in a statement sent to PBN: “Using awesome pizzas to encourage planet- positivity, we’re here to tell you that the future of our food is, and has to be, plant-based.

“We know that leaving meat and dairy-free off your plate is probably the single biggest way to reduce your environmental impact. And, we want to show how epic food made in this way can be – all through the power of our Thin and Crispy range.”

Considered one of the biggest plant-milk producers across Europe and beyond, Alpro is hinting at adding a new alternative to its portfolio.

Writing on Instagram, the company revealed its Belgium team had been ‘spreading the word’ on the new drink, made from oats.

The brand’s Shhh… This Is Not M*lk has received mixed reviews online. Via Abillion, some say it mimics dairy milk, while others rate it lower than Alpro’s other plant-based offerings.