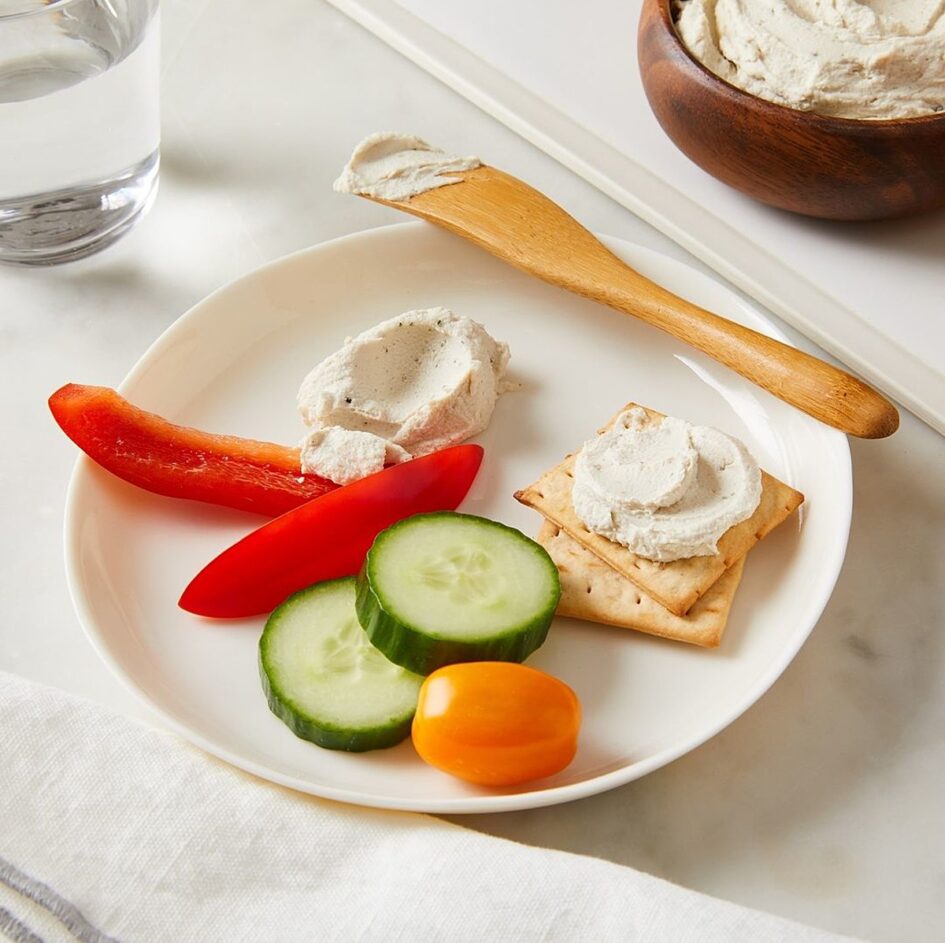 The vegan cheese world is growing at an unprecedented rate as companies are steadily releasing dairy-free cheese products in new varieties. Plant-based cheese brand Treeline just announced a new selection of cashew-based cheeses that include shreds, slices, spreads, and an all-new, highly-anticipated vegan goat cheese. The plant-based company will become one of the first brands to widely distribute a completely vegan goat cheese alternative.

Treeline launched its initial selection of French-style dairy-free cheese in 2011, becoming one of the first companies to experiment with vegan variations of artisan cheeses. The cheesemaker set out to develop cheeses fit for cheese boards and wine pairings while maintaining a sustainable and affordable company model. With the new plant-based goat cheeses, Treeline continues to drive innovation within the vegan cheese sector. The new goat cheese line will include several flavors including Original, Garlic Basil, and Blueberry. The company claims it managed to replicate the creamy, rich consistency that conventional goat cheese provides.

To produce the new goat cheese product, Treeline developed a culturing process that allows for this cashew-based cheese spread to take on the complicated flavors similar to goat cheese. The company reapplies old artisanal goat-cheese making techniques to this plant-based recipe, giving the new vegan product the same tanginess that consumers desire.

Alongside the innovative goat cheese product, the vegan cheese brand will also release its first shredded and sliced cheeses. The two styles will come in several flavors such as American (slices), Cheddar (slices and shreds), Mozzarella (shreds), and Pepper Jack (slices). The company announced that its new vegan cheese would hold the same texture, taste, and melting ability as traditional cheeses, making it a perfect substitute for pizza, nachos, grilled cheeses, and more.

The new slices and shreds source protein-rich cultured cashews from Brazil to create the creamy, delicious vegan alternative. The cashews are ground into a cream then fermented to produce a complex flavor reminiscent of traditional cheese production. Treeline also boasts that its plant-based cheeses contain a high amount of antioxidants because it uses high oleic sunflower oil. The brand aims to provide consumers with a delicious and health-centric cheese alternative.

Treeline will begin selling the new plant-based cheese products this November through its website. The company predicts that it will launch the new goat cheeses, shreds, and slices across retailers by Spring 2022.

The company’s experienced an extremely successful year, expanding across several retailers and pushing its research and development to perfect a wide array of cheese alternatives. Earlier this year, the company began distributing its French-style cheeses at 220 Target locations in the United States. Before that, the company’s products reached more than 3,000 retailers including Wegmans, Ralphs, Whole Foods, Kroger, and more.

“At Treeline we stick to what we know: making delicious plant-based cheeses that support human health and the environment,” Treeline writes on its website. “We chose cashews as the base for our cheeses for their delicious taste, creamy consistency, and health benefits.”