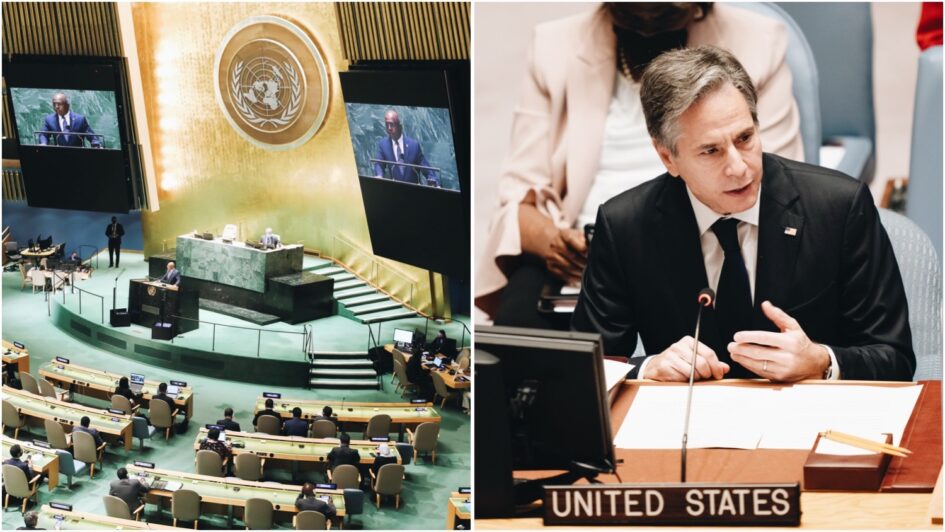 Predictably, the 76th Session of the UN General Assembly has been dominated by the significant threats facing humanity as a whole: COVID-19, climate change, and global inequality. But while many leaders’ speeches included bold pledges to global unity and increased climate action, the majority provided sparse tangible details for further analysis.

The UN General Assembly (UNGA) operates as the primary policy-making body of the United Nations, and it met last month for the 76th time since the international organization was first ratified in 1945. UNGA is particularly notable in that it forms the only UN organ in which all member states have equal representation.

Incoming UNGA President Abdulla Shahid of the Maldives (a beautiful, biodiverse archipelago which will be mostly underwater by 2100 at the current rate of sea-level rise) described the primary mission for this year’s session as “building resilience through hope.”

Specifically, the gathered countries aim to recover and rebuild sustainably after COVID, respond to the long-ignored needs of the planet, respect people’s human rights, and thereby revitalize the work of the United Nations. However, empty boasting and thinly veiled digs at other nations’ undermined the vague and somewhat ineffectual banner of global unity.

Speaking at the Youth4Climate summit in Italy last month, teenage environmentalist Greta Thunberg specifically referenced the shallow, faux-environmental jargon employed by the British government as part of its self-proclaimed “green recovery” from COVID.

“Build back better. Blah, blah, blah. Green economy. Blah blah blah. Net-zero by 2050. Blah, blah, blah,” said Thunberg. “This is all we hear from our so-called leaders. Words that sound great but so far have not led to action. Our hopes and ambitions drown in their empty promises.”

6 major climate developments from the UNGA

In his speech to the UNGA, President Joe Biden said that the U.S. aims to become the world’s leading provider of climate finance, and will work towards doubling the aid to help those worst affected by climate change to $100 billion.

He spoke generally about the need for multilateralism and global cooperation, and specifically noted the “borderless” nature of both the COVID and climate crises. This follows several different reports over the past few years indicating that astonishingly little climate aid actually reaches the world’s poorest, in addition to low-income countries’ hampered access to vaccines.

The U.S. president has received criticism for his lack of action on environmental issues so far, particularly compared to his bold, climate-based election platform. Specific points of contention include ongoing pipeline projects such as Line 3 (now also linked to illegal police surveillance and arrests), and Trump-era oil and gas leases.

UK leader said it’s time for humanity to ‘grow up’

British Prime Minister Boris Johnson talked bluntly about the need for immediate action on the environment. “It is time for us to listen to the warnings of the scientists,” he said. “It is time for humanity to grow up.”

While Johnson’s government has announced a broad range of extremely significant environmental goals over the last year, they remain at odds with the Conservative party’s abysmal record on such issues to date.

The prime minister made no new commitments in his 23-minute speech to the UN, and instead veered wildly from endorsing capitalism to praising his own government, then on to scolding other nations for their relative lack of action. He even made obscure references to philosopher Toby Ord, the Greek God Boreas, and iconic green puppet Kermit—much to the bafflement of UNGA’s gathered leaders.

In stark contrast to Johnson’s talk of togetherness, the current British government has received near-constant criticism from left and right alike for its countless pandemic response failures, chilling stance on migrants, recent cutting of foreign aid, ongoing persecution of low-income families, and authoritarian take on protest—particularly against those advocating for the very environment Johnson claims to protect.

It’s also worth noting that the prime minister himself recently used his own history of climate skepticism to defend the appointment of climate-denying international trade secretary Anne-Marie Trevelyan, while enormous donations link the Tory party to oil and gas industry fraud.

Xi Jinping, President of the People’s Republic of China, made a huge announcement at this year’s General Assembly. He said that his government will end all involvement in coal-fired power plants abroad, including 44 already set for Chinese financing.

The news follows similar announcements by Japan and South Korea earlier this year, and Georgetown University reports that the three countries combined are responsible for 95 percent of all overseas financing for traditional coal plants.

Both announcements came after significant global pressure and a previous lack of adequate action on emissions and global warming. Commentators responded each time by questioning the lack of meaningful detail, and how China plants to move forward remains to be seen.

During his speech, Peruvian President Pedro Castillo revealed that the country would be announcing a “national climate emergency” imminently.

He also said that his government aims to make Peru carbon neutral by 2050, along with a 30 to 40 percent reduction in greenhouse gas emissions by 2030, as “projected.”

Castillo added that the effects of climate change are “increasingly devastating,” citing the deforestation of the Amazon in particular, and suggested that the countries that “pollute the most” must adjust their obligations accordingly.

Global warming is already impacting Peru in a big way, with water scarcity and flooding affecting everything from agriculture and economic growth to conflict and migration. While Climate Action Tracker currently rates Peru’s environmental targets as insufficient, it categorizes the country’s existing policies and previous actions as “almost sufficient.”

Turkish President Recep Tayyip Erdogan told the General Assembly that his government will finally present the Paris Agreement to its national parliament in October. While Turkey was an initial signatory on the agreement, it has not yet formally ratified it due to what Erdogan called “injustices related to stated obligations and burden-sharing.”

Erdogan has also announced a new goal of zero emissions by 2053, though the government has yet to clarify whether this includes all greenhouse gas emissions or just CO2.

Brazil’s ever-controversial President Jair Bolsonaro announced in his UNGA speech that Amazon deforestation was down by 32 percent in August when compared with the same month last year, and recommitted to his existing goal of carbon neutrality by 2060. However, existing data and aerial images contradict his comments on deforestation.

The Amazon Institute of Man and Environment (Imazon), said that August 2021 actually saw a seven percent increase when compared to August 2020, adding that it was also the highest rate of Amazon deforestation in the month of August for a decade.

In April of this year, Bolsonaro approved a cut to the environment ministry’s budget just one day after promising a spending boost to tackle deforestation. The far-right leader’s government is notably supported by major agribusiness leaders. There are also currently mass protests calling for his immediate impeachment due to the still-unvaccinated Bolsonaro’s poor handling of the coronavirus pandemic.

Big promises, but what’s next?

Overall, world leaders spoke of the collaboration and unity needed to tackle food security and climate change this year. But their promises were significantly undermined by mid-speech jibes, conflicting ideologies, and unequal contributions to both the problems and the solutions.

A recent report found that almost all countries are still falling well short of the Paris Climate Agreement’s emissions targets, potentially setting the world on course for 2.7 degrees warming by the end of the century. If world leaders are serious about mitigating climate change, countries such as the U.S. and China (the two biggest polluters) will require more than words.

As noted by Barbadian Prime Minister Mia Amor Mottley, “we say the same thing over and over and over, to come to naught. My friends, we cannot do that anymore.”