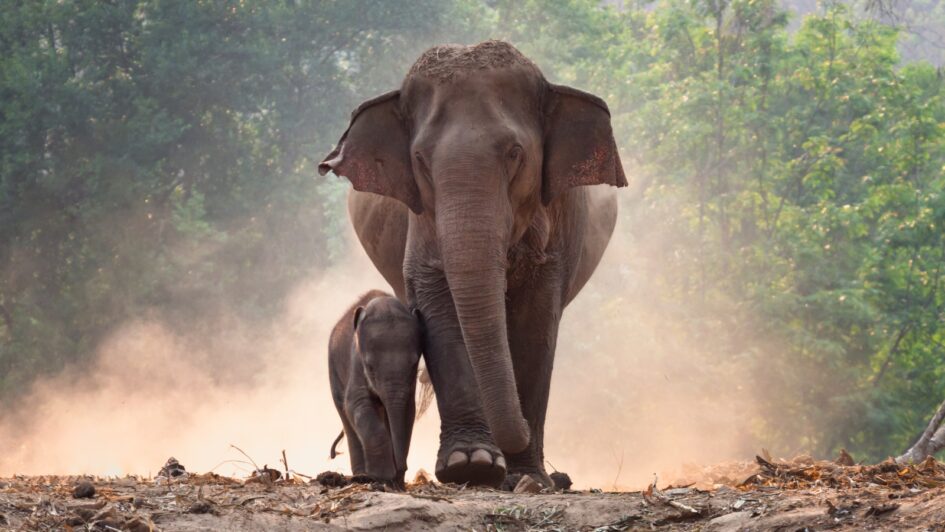 There’s a new nature documentary series available on Unchained TV, the all-vegan streaming TV network, and if you’re a fan of elephants, you won’t want to miss this.

Two years in the making, nine of the 26-part Asian Elephants 101 series world premiered on multiple National Geographic Channels, and the entire series will now stream on UnchainedTV.com.

Elephants are the gentle giants that we all love. The biggest animal on earth, and the one that nothing is frightened of.

But what many don’t realize is that all species of elephants are also ecologically significant.

According to the International Monetary Authority, African forest elephants help fight climate change, with each elephant at a carbon value of $1.75 million.

Elephants also create pathways to waterholes and fodder for other animals, who would otherwise be unable to access these life-giving resources.

Asian elephants play a key role in climate mitigation but according to the IUCN, there are less than 40,000 Asian elephants left on the planet, fully 27,000 in India, their last bastion.

Saving the Asian elephants of India is critically important to not only saving the species, but also other species in the ecosystem.

Human elephant conflict (HEC) is a huge problem for their survival. Due to unprecedented human population growth in India, competition for space is causing humans and elephants to clash.

Reckless development and land use have decimated 80 percent of wildlife habitats. Famished elephants are forced to leave the forests and venture into croplands to quell their hunger, exacerbating HEC, resulting in senseless tragedies for both humans and elephants.

This in turn triggers retaliatory killings of elephants, and the vicious cycle continues unabated.

The series also explores another major issue facing the elephants of India — their illegal capture.

On the one hand, elephants are revered, considered the embodiment of Lord Ganesh – a Hindu God with an elephant face. But on the other hand, they are tortured and exploited for profit behind the veil of culture and religion.

The series aims to influence decision-makers to legislate laws that would take into consideration elephants, wildlife, and the rich biodiversity of India.

The makers of the series told us:

“We hope that the narratives and visuals will help people understand our intricate connections with and dependence on other species, inspiring attitude, and behavior shifts, motivating people to protect the endangered Asian elephants.

“The films will help people realize that the survival of elephants in the forests of India is crucial to mitigating climate change globally, demonstrating that what happens in one country reverberates across the planet.”

You can watch the full series for free on Unchained TV here:

WIN: A tote’ally amazing Maddox bag from Watson & Wolfe worth £215!

12 Amazing Women-Owned Vegan Products That Ship Anywhere in the U.S.

Respect Elephants—Let Them Go: That’s the Message of PETA ‘Elephant’ Outside Shrine Circus