URGENT: Speak Out Against Bird Poisoning at Florida Condo Complex! 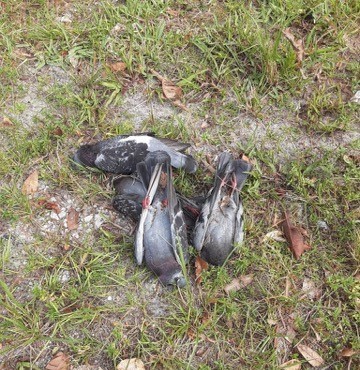 Wild birds are allegedly being poisoned at Wilton Station condominiums in Wilton Manors, Florida! PETA has received reports that numerous dead birds have been found on the property after a recent condo board meeting during which management reportedly discussed poisoning the animals. According to one witness, “These poor birds were falling from the sky landing on some of the residents balconies and suffering horribly …. [Management] lied and said [the substance] would not kill them …. Please help us.”

Avicides (bird poisons) attack and impair the nervous system, causing immeasurable suffering and a slow, agonizing death. Furthermore, lethal bird-control measures actually backfire because when animals are killed, the resultant spike in the food supply prompts survivors and inevitable newcomers to breed at accelerated rates! Finally, poisons are indiscriminate, posing risks to other wildlife as well as domestic animals who may consume the carcasses of poisoned birds. In fact, we’re told that a resident’s Chihuahua was sickened and required veterinary care after coming into contact with some poisoned bait that apparently blew off the roof of one of the buildings at Wilton Station.

PETA urged representatives at Castle Management, which manages Wilton Station, to use humane bird-control methods that are tried and true, apparently to no avail. Your voice is now desperately needed! Please urge management to remove any avicides immediately, then forward this alert to everyone you know.

Why Do Pigs Cry? Their Complex Emotional Lives Highlighted In New Study

Students Laugh While Making a Dead Animal ‘Dance’—Speak Up!

Ellie Goulding named WWF ambassador: ‘I want to speak up for our extraordinary planet’