Using art to wake up society 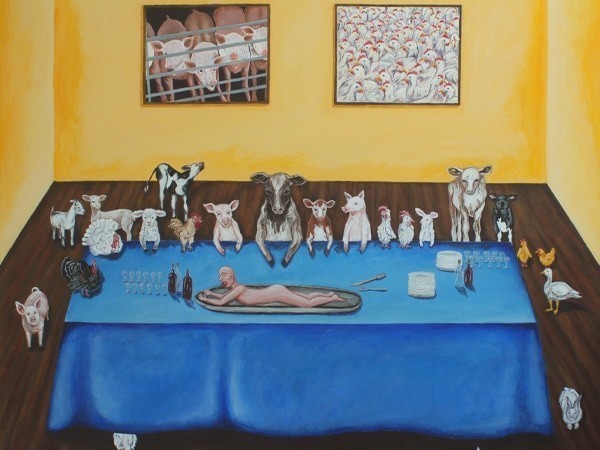 Wake people up! I try to use my art to get people to question their own attitudes toward non-human animals, and in particular, the fact that we are destroying the planet for wild animals.

For my gallery work, I always try to include information in the descriptions which talk about the threats to the animals I’ve depicted. For example, when painting wolves, I’ll add a line in the description about wolves being killed because of cattle ranching.

I have also done a series of paintings about animal intelligence, where I try to use humour to get people to question the widely-held belief of human superiority. For example, prairie dogs have the most sophisticated vocal language ever decoded.

Prairie dogs have distinct words for various kinds of predators, and also construct sentences describing what a particular predator looks like. Also, different species of prairie dogs use different dialects and wouldn’t be able to understand each other.

I did a painting about this, and in my social media posts and in descriptive text next to the piece when I showed it, I talked about how prairie dogs have language, as well as the ecological importance of prairie dogs to the ecological communities in which they live, and the fact that they’re being decimated for cattle ranchers and development.

Volunteering at The Vegan Society

Over 50,000 products now certified by The Vegan Society

The Vegan Society is relaunching its Youth Membership offer

What Is the Vanguard Society?