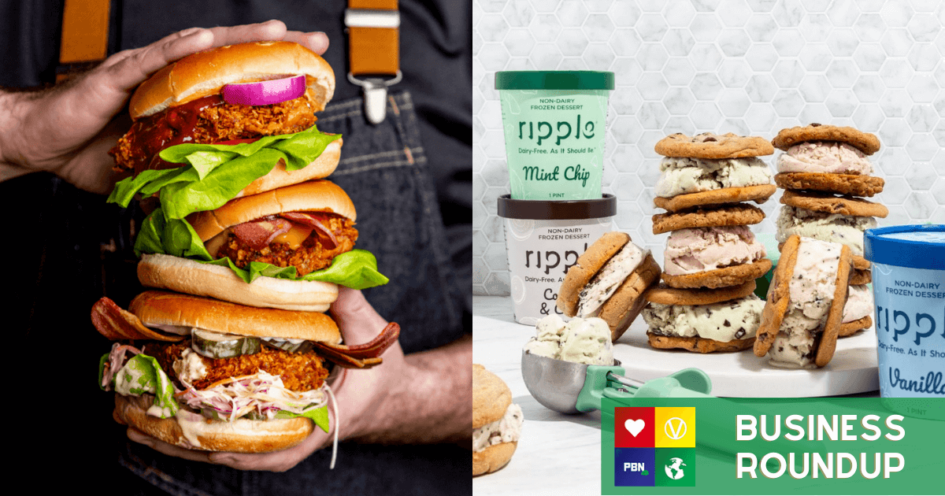 Each week, the vegan business scene gets more and more crowded – and for good reason. Investors everywhere are keen to keep up as the animal-free industry shows no signs of slowing down.

From pea-based dairy-free milk, to major companies working to carve out a space in the plant-based field, here are the latest updates in the vegan business world.

Brandplant, a plant-based distributor and brand owner for the Benelux region, has received financial backing from two major investors in the vegan scene: Veg Capital and Kale United.

Brandplant distributes brands like Vegan Fried Chick*n, Vantastic Foods, and PLAYin CHOC, as well as its own brands Pianta and Upside.

The collaboration will help push the growth of Brandplant’s brands, as well as others from Veg Capital and Kale United’s portfolios.

Brandplant Co-Founder Erik van Gangelen commented: “Working with Veg Capital’s team to bring portfolio brands, such as VFC, to the Benelux region creates value for both partners, which has only been strengthened by Kale United joining this partnership.”

Kale United’s Founder Måns Ullerstam added: “This is part of Kale United’s strategic plan to solve distribution of plant-based brands all across Europe. We also look forward to taking Brandplant’s brands to the Nordics.”

Ryan Pandya, Co-Founder and CEO of Perfect Day, noted that the company’s technology allows it to further its sustainability efforts.

“When we first started this almost eight years ago, we had the simple goal of creating a way to make dairy without animals,” Pandya said in a statement. “We quickly realized that we could maximize our positive impact for the planet and the global food system by applying our technology and know-how across the supply chain.”

A third-party assessment found that Perfect Day’s slaughter-free whey protein decreases greenhouse gas emissions by up to 97 percent. Further, it lowers blue water consumption by up to 99 percent and reduces non-renewable energy use by up to 60 percent.

Ripple Foods, which uses pea protein to craft dairy-free milk, has bagged $60 million in a Series E funding round.

Based in California, Ripple will use the funding to enter overseas markets and explore new categories, such as vegan soft serve and cheese.

Ripple uses novel technology to remove colors and/or flavors from existing plant protein isolates. This results in a neutral protein that can be modified to contain more protein or less sugar, for example.

Consequently, Ripple’s vegan milk offers 8g of protein per serving and contains no sugar. It has 50 percent more calcium than milk, as well as vitamin D and 32mg DHA omega-3s.

Plant-based food brand Nabati Foods has received approval to list its common shares on the Canadian Securities Exchange (CSE). The Common Shares began trading on the CSE on October 4, 2021 under the symbol MEAL.

Further, Nabati announced that 4,509,390 incentive stock options were given to directors, officers, employees, and consultants of the company.

Ahmad Yehya is the CEO, COO, and Director of Nabati. Yehya said in a statement: “We are very pleased to announce Nabati Foods’ listing onto the CSE. We are extremely optimistic about the burgeoning plant-based food industry and Nabati’s market position within it.”

Kingdom Supercultures has raised $25 million in a Series A funding round, which was led by Shine Capital. Valor, Tao, Lux, SALT, Reference, Digitalis, and existing investors also participated.

Kingdom is a biotech company that develops natural microbial cultures for the packaged goods industry. It is putting together a ‘library’ of such microbes, which can be assembled into new speciality ingredients and sold to consumer goods manufacturers.

For instance, Kingdom uses its microbes to produce vegan yogurt and cheese, as well as low-alcohol wine and beer.

The biotech company, founded in 2019, says it will use the new funds to further expand its R&D and develop new ‘Superculture’ ingredients.

“The last few years have seen tremendous growth in demand for consumer goods that are healthier and more sustainable,” Kendall Dabaghi, CEO of Kingdom Supercultures, said in a statement. “This funding will allow us to meet the need for novel, natural ingredients by continuing to build out our world-class team and advancing our Superculture R&D.”

Major food processing company Heinz has unveiled a new plant-forward brand, Plant Proteinz. Heinz is pumping £2.5 million into the label, as part of its mission to build a plant-based brand ‘that consumers can trust’, The Grocer reports.

The Plant Proteinz line includes soups boasting 14-15g of protein and two of your five-a-day. Further, they contain no artificial colors or preservatives.

Despite the brand being presented as plant-based, not every Plant Proteinz product is suitable for vegans, although they are all vegetarian.

She added that Heinz aims to make ‘plant-based eating accessible for all consumers as the trend for alternative plant-based consumption continues to grow’.

Heinz manufactures food products in six countries, and markets them in more than 200 countries and territories.