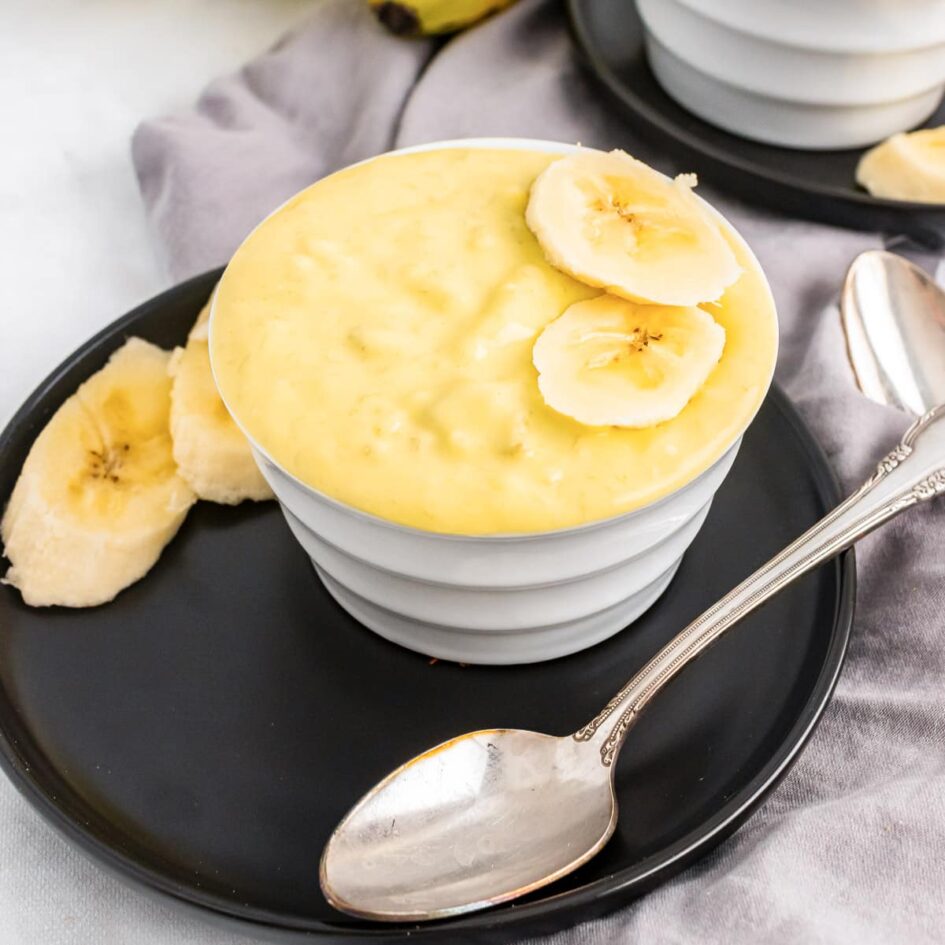 With a few ingredients you can serve up this creamy and delicious Vegan Banana Pudding. Full of sweet banana flavor, this pudding is sure to be a hit. Add a dollop of creamy vegan whipped topping and enjoy!

Whip up your pudding in 15 minutes, then pop it in the fridge to chill and set up. This dessert is one of our family favorites!

This Vegan Banana Pudding recipe is…

How to Make Vegan Banana Pudding

Full directions for how to make Vegan Banana Pudding are in the printable recipe card below.

Make sure to use ripe bananas for this recipe. Then you’ll want to mash them up with a fork. You’ll want to work out large lumps so your pudding has a nice creamy texture.

You have to stir the pudding frequently while it is on the stove. If you don’t, the pudding may burn on the bottom of the pot and ruin your dessert.

If you really don’t want any lumps, you can use a food processor to pulse the banana mixture to make your pudding ultra creamy.

I used maple syrup for this recipe. But if you want to, you can swap the syrup with an artificial sweetener to cut out some of the sugar content.

Turmeric is optional, but it will add a nice color to your pudding. You could also use a yellow food coloring to give your pudding a yellow-ish color.

You can use this Vegan Banana Pudding to make some tasty parfaits. Use a vegan-friendly cookie or graham cracker for the first layer of your parfait. Then add a layer of pudding and a layer of vegan whipped cream!

Is coconut cream the same thing as coconut milk?

Coconut cream and coconut milk are not the same, so make sure you buy canned coconut cream. Coconut cream is ultra thick and gives the banana pudding that rich flavor and creamy texture.

What does the cornstarch do in this recipe?

The cornstarch in this recipe helps to thicken the pudding while it cooks on the stove. Without cornstarch, your pudding would take a lot longer to reach the desired consistency.

How can I make this pudding less sweet?

If you want to tone down the sweetness of this pudding, simply use less syrup. Just measure out half the amount called for in the recipe. Then you can add more syrup if you want the dish to be a bit sweeter.

How should I store banana pudding?

Banana pudding needs to be stored in an airtight container in the fridge. It can last for up to 5 days in the fridge. Serve the pudding cold and enjoy with your favorite garnish—whipped cream, a cherry, fresh sliced bananas, etc. With a few ingredients you can serve up this creamy and delicious Vegan Banana Pudding. This pudding is sure to be a hit!

Vegan-ize any recipe!Grab our free vegan cheat sheet, packed with my favorite easy substitutions to make any recipe vegan.