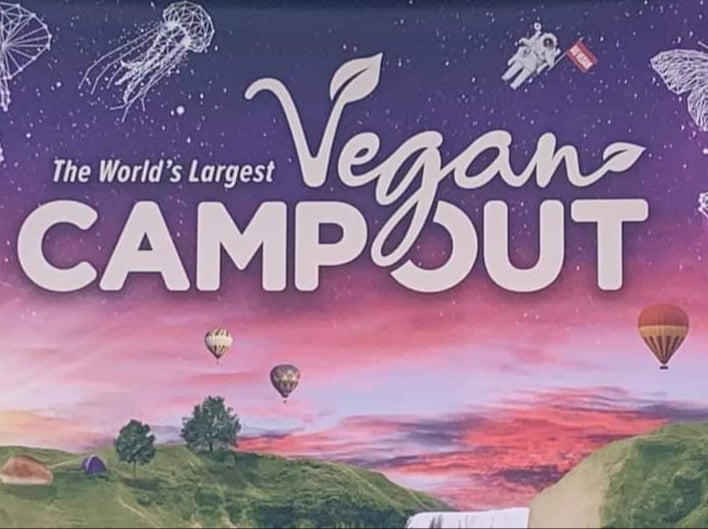 Vegan Campout first launched in 2016 and since then the festival has only got bigger and attracted more people each year. It has become an internationally recognised event with people traveling from different countries all over the world just to attend.

The 2021 version (held between August 20th – 22nd) hosted 12,000 people and the event was a huge success despite the obstacles associated with the pandemic. Several speakers and food vendors cancelled last minute but regardless of this the organisers still managed to deliver another fantastic experience.

The line-up included major celebrities and influencers including Russell Brand, Chris Packham, BOSH and Joey Carbstrong who all headlined the main stage. There were tents dedicated to activism, music and mind & body exercises also, which meant a great deal was happening over the weekend.

The festival creates a totally unique space for vegans. For one weekend a year they can camp at an exclusively vegan event, free from animal products and any worries of cross-contamination. The food vendors were diverse and catered for those who enjoy fast food and for those who prefer a whole food plant-based diet. There’s something for everyone!

Non-vegans were, of course, welcome at the festival too and they are encouraged to immerse themselves in the vegan experience. No doubt, some would have made the switch to veganism at the event after seeing all the fantastic food available and hearing some of the inspiring talks.

Several notable activists and organisations were also part of the line-up. They used their slots as an opportunity to talk about the importance of animal rights activism and to motivate non-active vegans to get involved in direct action.

Members of Vegan Runners UK who were in attendance organised a large parkrun takeover. There were over 100 members of the club at the Newark Parkrun on Saturday morning, only a few miles away from the festival.

Here the focus is on conscientious living. Mindful people carrying out mindful actions: they leave little behind to harm the environment. The festival released the following image on their social media pages after the event:

“We’re so proud to show how responsible the Vegan Camp Out audience is. Each pic was taken just after everyone had left the site before cleaning had taken place!” – Vegan Campout

This highlights how environmentally aware their attendees are compared to other festival goers. This is something the event is, understandably, very grateful for and very proud to promote.

All the food vendors are 100% plastic free and the waste management team sort through and recycle everything. And if that was not enough to demonstrate the ethical nature of the event, a proportion (£6000) of ticket sales are donated directly to Viva to help with their campaigns.

Next year’s event will be held at a (soon to be released) new venue somewhere in the UK instead of the usual Newark Showground. In addition, the event will start a day earlier than usual to allow campers to settle in before the line-up starts. The venue also addressed important feedback from attendees on Instagram and committed to improving many of the facilities in readiness for next year.