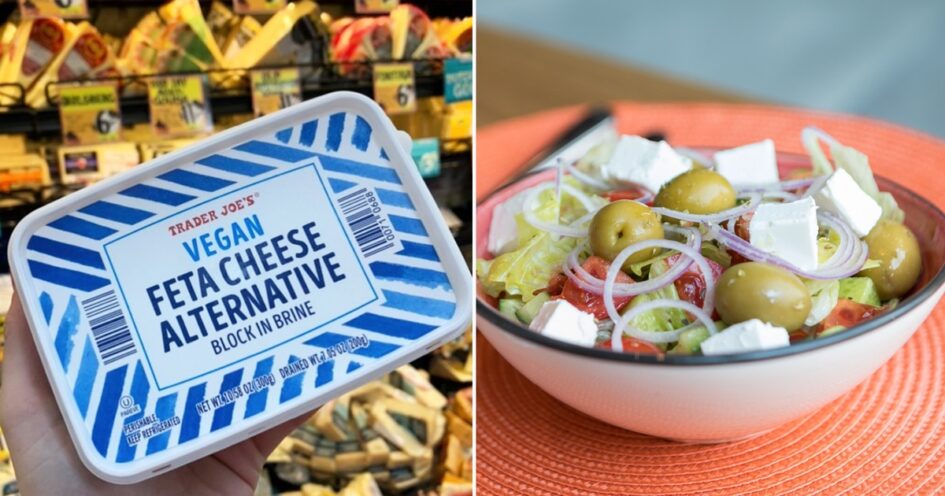 Grocery chain Trader Joe’s just increased its vegan cheese options with the launch of Vegan Feta Cheese Alternative. The new vegan cheese is made from coconut oil, potato starch, and potato protein. Trader Joe’s vegan feta comes in a block that is surrounded by brine—similar to traditional feta—and is sold in a 300-gram (10.6-ounce) container for $4.99.

In April, Trader Joe’s Category Manager for Cheese, Kim Conroy teased the launch of a suite of vegan cheese products on the chain’s Inside Trader Joe’s podcast. “​​This is a huge growth area of the cheese business right now,” Conroy said about vegan cheeses. When it came to the store’s vegan feta, Conroy explained that it’s a one-for-one swap for traditional feta and it can be used “without changing the recipe at all.”

In addition to its new Vegan Feta Cheese Alternative, Trader Joe’s recently improved the recipe of its existing vegan cream cheese which Conroy said is now “very similar to our traditional cream cheese.” The store also launched vegan Parmesan cheese shreds and vegan American-Style Coconut-Based Slices, which “melts in a grilled cheese sandwich the way a typical slice of our Organic American would melt,” according to Conroy.

These improvements in the cheese aisle build upon existing options. Last summer, Trader Joe’s launched its own private-labeled vegan cheese line. Made with a cashew base, the line includes vegan Cheddar Style Slices and Mozzarella Style Shreds, both priced at $3.99 per 7-ounce package. When it comes to soft cheeses, Trader Joe’s has long stocked Miyoko’s vegan cream cheese and recently became one of the first retailers to offer Boursin Dairy-Free cheese spread, a plant-based version of the dairy brand’s popular Garlic & Herbs cheese spread flavor made in partnership with vegan brand Follow Your Heart. 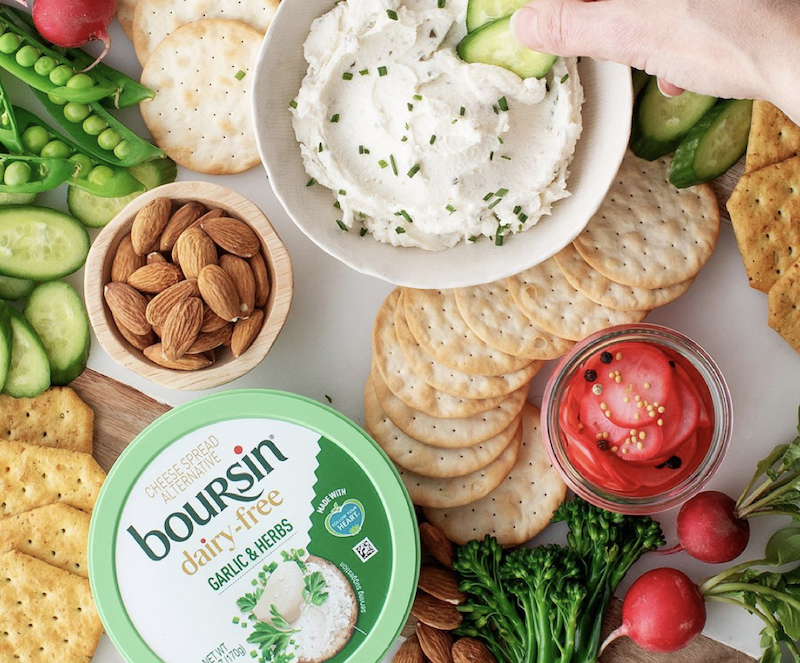 Earlier this year, Trader Joe’s made a commitment to expand vegan options—and improve existing offerings—in every aisle to keep up with customer demand for plant-based foods. This fall, Trader Joe’s continued to make good on that commitment with the launch of 10 vegan products, ranging from pumpkin cashew yogurt to Halloween-themed sour gummy cats-and-bats candies.

Feta: the new vegan cheese on the block

Trader Joe’s vegan feta is not the first to market, with Greek brand Violife leading the category with its Just Like Feta cheese blocks. Last year, vegan brand Follow Your Heart (FYH) upped its vegan cheese game with the release of Dairy-Free Feta Crumbles Cheese Alternative. Launched in tandem with its 50th anniversary celebration, FYH’s vegan feta crumbles are made with coconut oil and sold in 6-ounce packages with a shelf-life of four months. The vegan feta was first available at Albertsons and Vons stores in Southern California, and Sprouts stores nationally, before expanding to other retailers across the country. 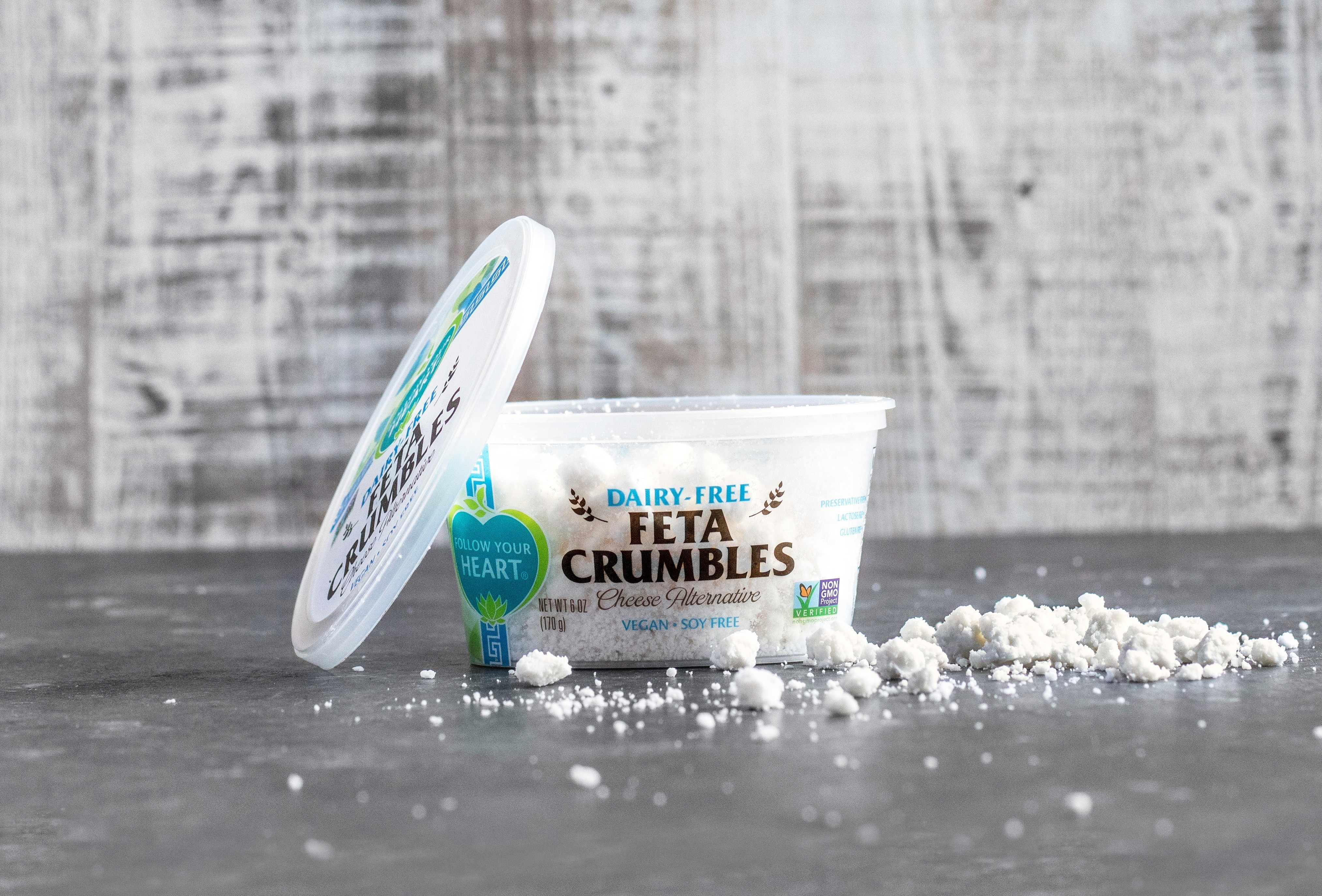 While Greek-style feta is crumbly and briney, the Australian version is creamier and typically made from goat milk. Founded by Australian couple Veronica Fil and Shaun Quade, California-based Grounded Foods has developed more than 30 varieties of vegan cheeses, including dairy-free feta, made from unique vegetable ingredients. Grounded Foods uses cauliflower and hemp (or a blend of both) as bases of its cheeses that undergo various fermenting and aging techniques and are flavored with natural ingredients such as garlic, mustard, and onion, to achieve a variety of cheese flavors. The company’s vegan feta (called Hemp Seed Goat Cheese) is now available at Whole Foods Market, alongside its Cheese Free Cheese Sauce and Hemp Seed Cream Cheese.

For more about vegan options at Trader Joe’s, read: