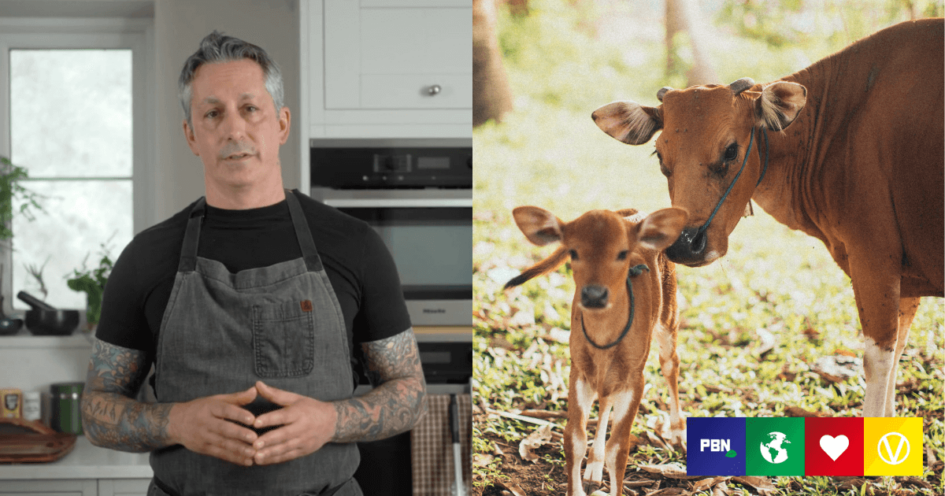 Vegan chef Derek Sarno, best known for co-founding Wicked Kitchen, has presented at an official TED conference. The entrepreneur’s talk – which was featured on the TED homepage – touted the benefits of plant-based food, and revealed the paths that led him to it.

In the presentation, Sarno explained he is on a “mission to unleash the mighty powers of plants.” The chef uses plant-based ingredients, especially mushrooms, to create realistic vegan meat and other foods.

He aims to mirror the flavor and textures of meat and dairy, but without the implications of animal-based food production.

During the TED Countdown Summit, Sarno highlighted the undeniable link between meat consumption and climate breakdown. For instance, animal farming is to blame for a significant amount of greenhouse gas emissions, deforestation, and pollution.

Further, research suggests omitting meat from one’s diet helps to sidestep the risk of diseases like cancer and diabetes.

Grief and the journey to plant-based

But health and sustainability are just some of the reasons Sarno became a vegan chef.

“My other reason has to do with grief, and dealing with the unexpected death of my partner,” he said in the talk. “The suffering and grief I felt was suffocating. I had two choices: to go down a road of self-destruction, or accept what had happened and find a way through it.”

Before his partner Amada passed, Sarno’s life was “based on ego and attachment,” he said.

“Being the best. Cooking anything and everything without a second thought as to the consequences of my actions. As long as the food tasted great, and I was paid well for it, I didn’t care where it came from.”

And so, Sarno laid his “old self to rest,” sold off his food business, and moved to a Buddhist monastery where he lived for three years and “studied compassion.”

“What I discovered was a connection to food and heart that I had ignored. Animals suffer just as we do,” he continued, later reiterating that animals have emotions and families.

“From then on, it became my mission to find alternative ways of preparing food that not only benefited people, but avoided animal suffering as well,” Sarno explained.

“That time reflecting and learning helped me reorientate my own moral compass and opened up a whole new world of creative cooking. It also helped me become much less of a jerk.”

There are many reasons to eat plant-based, Sarno said, and encouraged viewers to find one they identify with. He added that opting for a vegan meal even once a day “makes a huge difference.”

The presentation is Sarno’s latest but not first collaboration with TED. Last month, the media giant held its first in-person climate conference. Sarno was in charge of the event’s menu, which was fully vegan.