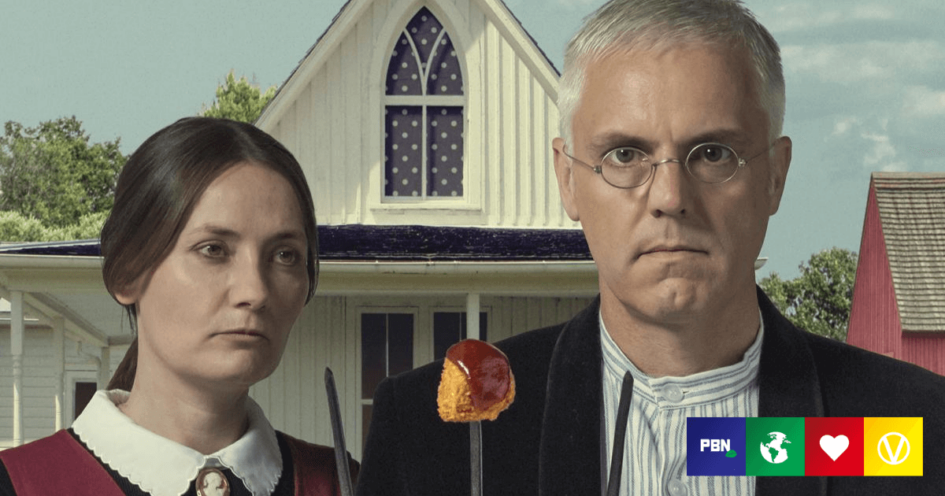 UK-based vegan fried chicken brand VFC has just debuted in the US and Canada. To celebrate, VFC released a campaign recreating scenes from America culture, including the films When Harry Met Sally and Ghost.

The advertisement featured VFC’s Co-founders Adam Lyons and Matthew Glover, as well as the company’s Director of Sales, Stewart McGuckin.

Glover’s partner Jane Land also made an appearance. Both Land and Glover founded the Veganuary campaign in 2014.

The America-inspired campaign is not VFC’s first offbeat marketing strategy.

On its social media pages, VFC selects a ‘Cluckwit of the Month’ – referring to users who leave ill-mannered comments on its posts.

And earlier this year, VFC joined forces with Harry Potter actor Evanna Lynch and Downton Abbey actor Peter Egan. The company took the stars undercover to chicken farms. The initiative aimed to spread awareness of the mistreatment of animals in the food system.

For a company that launched less than a year ago (in December 2020), VFC is rapidly expanding.

“We’re delighted to get the chance to crack America, and are starting with foodservice on the west coast before rolling out across the whole country. We have big ambitions for VFC,” Glover told The York Press.

“The US gave the world KFC, and we’re keen to return the favour with VFC – an alternative which is kinder to animals and our planet.”

In Canada, Gaynor Fletcher’s team at Vegan Foods Wholesale will be the exclusive broker and distributor for the country. Rick Hirsch is set to lead the launch in the US. VFC will initially be rolled out to foodservice brands on the west coast. Later, it will expand into retail, too.

In a statement, Fletcher explained that the partnership with VFC is more than a business decision. Instead, the teams ‘share a vision’ to end animal suffering ‘on a global scale’.

Fletcher added: “We applaud VFC’s mission to remove animals from an unjust, unevolved food system and feel privileged to be working with a brand, unapologetic in its intention to put an end to factory farming.”

Behind the Scenes at Crystal Renn’s All-Vegan Cover Shoot