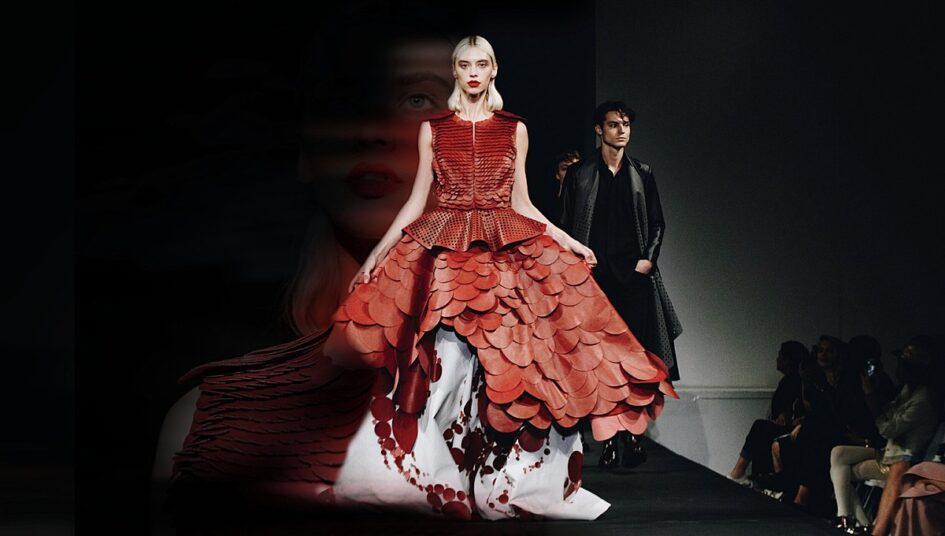 Vegan fashion week has returned to Los Angeles, marking this year the second time that the event has been held, and revitalizing the founder’s hopes to establish LA as the vegan fashion capital for the global movement toward a kinder, gentler fashion industry. VFW made its debut in 2019, but due to the pandemic, plans for the 2020 event were pushed scrapped. This year, founder Emmanuelle Rienda took on the event herself, with help from others who are also passionate about cruelty-free fashion.

“I’m surrounded by volunteers, everything is coming to fruition because the models and the team donated their time,” Rienda told WWD. The LA-based french creative director and founder, Rienda, is on a mission is to make LA the vegan fashion capital of the world with her expertise in the cruelty-free industry and motivations to make faux furs and leathers the norm.

Rienda offered up her showroom to personally fund the event that took place on the rooftop of the USC tower downtown. The theme of the show was “Expansion,” and featured Vegan Tiger, a South Korean label, and Nous Etudions, (French for Us Students) an Aregintian label, among other emerging vegan fashion designers.

Models in Nous Etudions were dressed head to toe in oversized pants, jackets, and coats made with biodegradable vinyl and stitched with fine detail to showcase vegan fashion is as sophisticated as it is sustainable. Vegan Tiger featured silky fabrics and vibrant prints with faux fur halter tops and coats to advocate for animal welfare.

After the show, the two designers spoke about the quickly-growing movement in vegan fashion and shared stories about the nature of their brands. A tradeshow was also set up outside of the show and Mexican designer Desserto displayed cactus leather accessories and former Paris-based footwear designer David Tourniairie-Beauciel presented vegan sock leather shoes by his newest sneaker label, 53945.

Vegan Fashion is a Hot Commodity But Still Needs Support

Last weekend was just the beginning of a new fashion era and the theme ‘expansion’ starkly contrasted a recent fashion moment when a climate change protestor disrupted the Louis Vuitton show in Paris with a huge poster: “Overconsumption = Extinction.”

Conscious consumerism is at the forefront of spending and luxury designers are looking for answers in sustainable materials like mushrooms, cactus, apples, and pineapple leather. In fact, Hermes produced its first-ever vegan travel leather bag made with mushrooms in a collaboration with MycoWorks, a California-based start-up turned conglomerate.

Pierre-Alexis Dumas, Hermès’ artistic director even spoke highly about the mushroom leather material in an interview with Business of Fashion, saying “MycoWorks’ vision and values echo those of Hermès: a strong fascination with natural raw material and its transformation, a quest for excellence, with the aim of ensuring that objects are put to their best use and that their longevity is maximized.”

Adding to the roster of high-fashion designers headed in a vegan direction are top names like Gucci, Tommy Hilfiger, Ralph Lauren, Prada, Valentino. Marco Bizzarri, Chief Executive and President of Gucci said “I don’t think it’s still modern,” when he was asked why the house decided to ban fur back in 2018.

The fashion industry is not yet where Emmanuelle Rienda wants to be. “I think people are not ready for vegan and I’m talking to a lot of people who still do leather … But I have a mission and this needed to be done. I don’t want the message to die,” Rienda said in the same WWD press interview. Rienda struggled to find brand sponsors for the event, “I didn’t find one and I’ve been trying so hard,” she said, but her determination to make a difference allowed the show to go on.