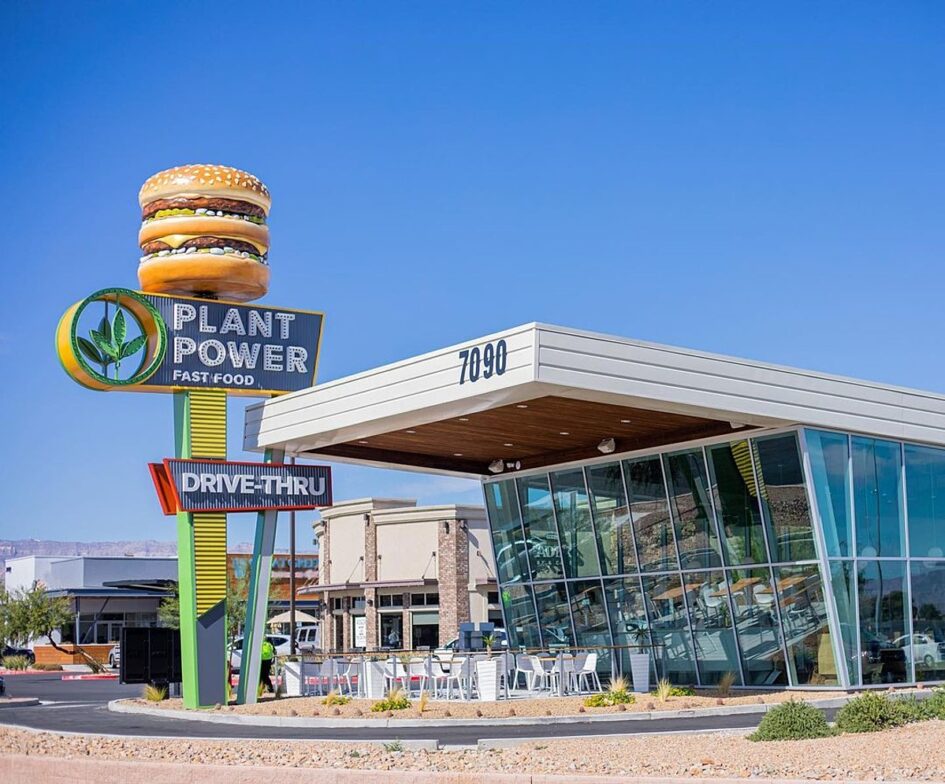 Plant-based fast food entered the spotlight in recent years as big companies such as McDonald’s and Burger King began to experiment with vegan proteins. California-based Plant Power Fast Food plans to take on the big fast-food companies, presenting a fully vegan fast food menu built from the ground up. The company just announced the opening of its 10th location in Las Vegas – marking the first time the chain has expanded outside of California. Earlier this year, the company revealed that it intended to spread across the state of California and eventually to other cities across the US.

Plant Power Fast Food recently partnered with real estate group Scale x 3 Management to begin franchising its business, allowing for a rapid, large-scale expansion effort. The company aims to bring a fast-food experience without any worries regarding cross-contamination, animal-based ingredients, and substitution. Any plant-based consumer can walk in and eat anything on the menu. The plant-based concept is designed to handle large crowds and quick order times, providing the same experience as any traditional fast food experience.

“Scale x 3 embodies everything we’d hoped for in a franchisee, both in terms of their commitment to the mission and also the experience and infrastructure required to operate a high-volume concept like Plant Power Fast Food,” President and Chief Operating Officer of Plant Power Fast Food Zach Vouga said.

The new Las Vegas storefront – located at 709 W Craig Rd. Suite 120, Las Vegas – opened its doors on October 15, welcoming locals and visitors to its highest-grossing first day in the company’s history, signifying rising popularity among consumers. The company also announced that alongside its nine other locations around California, it will launch its 11th location in Los Angeles.

Plant Power Fast Food fully recognizes and welcomes the introduction of plant-based proteins and ingredients entering the general fast-food sector. However, the company positions itself as a worry-free fast food experience, where consumers can easily order a completely plant-based meal without doubt or fears of cross-contamination.

“We’re grateful to see major chains adding plant-based options to their menus, but there’s no doubt that consumers are seeking out progressive new brands with an authentic commitment to taste and sustainability,” Co-founder and Chief Executive Officer Jeffrey Harris said. “The massive growth that we’ve experienced since we started in 2016 is proof that the time is right for a major 100 percent plant-based, cruelty-free, sustainable, and healthier option in the fast-food segment.”

The expansion closely follows the company’s Series A funding round where Plant Power Fast Food secured $7.5 million. The investment round was led by Eat Beyond Global Holdings, Batta Foods, and Helia Capital USA Inc – a subsidiary of Fusion Ventures. The funding round allowed for its location in Las Vegas to launch alongside two other locations in Hollywood and Sacramento. The company announced that the funding round would allow for menu development and further corporate expansion.

“At Fusion Ventures, our mission is to invest in purpose-driven companies that are a rare combination of pure passion and operational excellence, which is the core of any truly great enterprise.”  Fusion Ventures Chief Executive Officer Lee Piccoli said. “Plant Power Fast Food has built something unique and scalable, and the brand has captured the hearts of aspirational consumers whose needs are evolving.”

The demand for plant-based fast food is rising as more companies begin to debut or test new vegan alternatives. This month, McDonald’s announced its first test within the United States at select restaurants nationwide. Although not fully vegan in the US, the McPlant burger features a plant-based burger patty created in partnership with Beyond Meat. The burger retains the dairy cheese and mayonnaise while substituting for vegan alternatives in other markets. Other fast-food restaurants led this movement such as Carl’s Jr, Fatburger, and Burger King. Now, Plant Power Fast Foods plans to hold the bigger chains accountable with its expanding national presence.