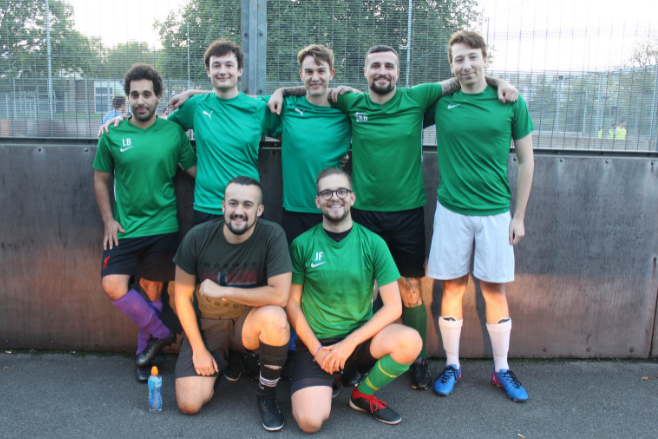 A football team with a common theme – all the players are vegan, Kale Madrid C.F. are Bristol’s vegan five-a-side team, with a passion for the environment, their health and, of course, animal welfare.

Although the team started small during the first COVID-19 lockdown, there are now over 15 regular players. The team is made up of students, a psychiatrist, a barber, an electrician and many more varied people from all walks of life.

Back in 2020, Matt Mead brought the players together via the Facebook group ‘Bristol Vegans’ and was amazed by the response. The team focus a lot on their nutrition and recovery time between matches. Taking inspiration from documentaries like The Game Changers on Netflix, they see their vegan diet as a huge advantage over other teams. The team follow in the footsteps of other vegan footballers, like Chris Smalling, who is well know for advocating a plant-based diet.

Kale Madrid players have noticed that their fitness and stamina have come on leaps and bounds since the start of the league, especially in comparison to the other teams.

Some players drink a litre of Beetroot juice before every match; others just try to stay off the vegan beer the night before. Whatever they’re doing, it’s working for them!

Despite playing twice a week, it took months for the team to meet up outside of the pitch, and see each other in something other than their green sportswear.

The team social brought together both players, and their partners, which eventually led to some of the team going to the Vegan Camp Out together in Nottingham. The boys sat under a gazebo in the rain, coming up with vegan chants and lots of banter. “Olive! Olive! Olive!, Soy! Soy! Soy!” could be heard for miles.

Who are Kale Madrid?

Leon is known for consistently showing up to the game offering around a huge bag of nuts, therefore being known as the guy with the huge nut bag. There’s also Byron, who is always injuring himself and was nicknamed by another team as ‘Aquaman’.

Team member, Tom, was nicknamed Harry Potter by the same team, which was probably a reference to his round glasses, but it could also be his magical footwork!

All the players have their quirks, and no two are the same. This is what makes the Kale team so special. Kale Madrid C.F. are now the proud champions of their Thursday night league, winning the final match by a staggering 24-2.

Other teams have started to recognise the players, and rumours have circulated. From the side lines, their comments have been overheard. “We can’t lose to the vegans again, boys!!’ and “They’re vegan? No wonder they look so healthy”.

It’s a unique kind of accidental activism, but it is definitely spreading a positive light on veganism as a whole.

Looking to the future

To further their influence, the vegan football team now have an Instagram account, @kale.madrid.c.f that posts live updates of the games, as well as announcing their Man Of The Match.

They also enjoy showing off their new logo, designed by player and graphic designer, Jamie.

Kale player, Dan, even has a personalised air freshener in his car – if that’s not dedication, we don’t know what is!

The team have recently gained sponsorship on a small scale and are looking forward to working with more vegan companies in Bristol in the future.

Exactly Which Carbs Lead to Weight Gain? A Nutritionist Explains