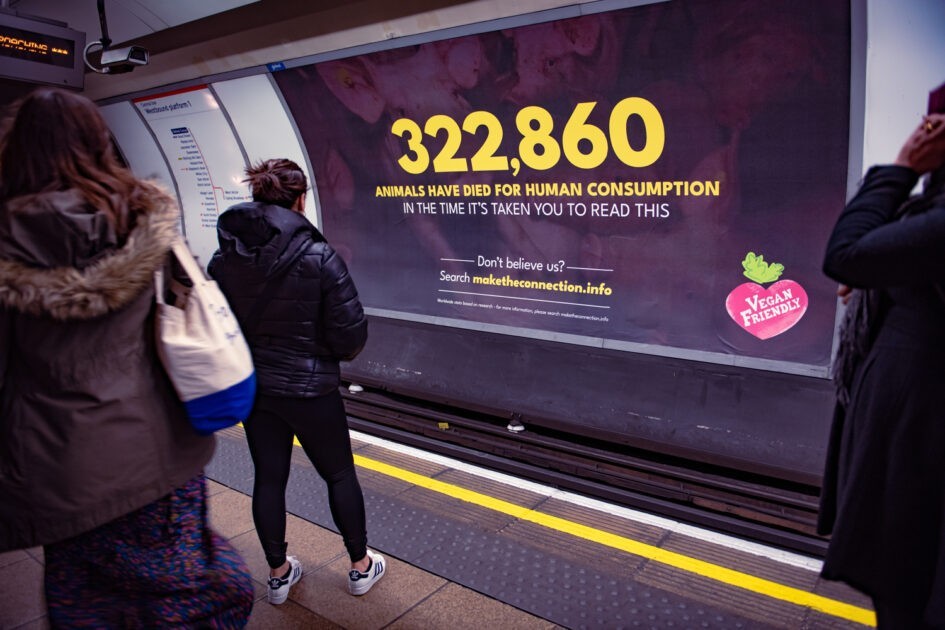 Until January 31st, the thought-provoking ad will be on display at one of London’s busiest underground stations.

‘Make The Connection’ is an attempt to highlight the shocking figures behind animal suffering, showing that in just 8 seconds, (the average time it takes to read the ad), 322,860 animals globally to die for human consumption.

The stat was chosen by the organisation to serve as a realisation to the public the impact of choosing to buy animal products. The connection is an important factor as recent figures released by Veganuary showed that since its launch in 2014, 9% of GB adults have participated in Veganuary, and of that 9%, 62% cited animal welfare as a motivating factor.

“We wanted to launch a powerful campaign to open people’s eyes to the shocking reality animals face every second of their lives, because of our food choices”, said Noga Bronsky, Vegan Friendly UK CEO.

The eye-opening stats serve as an entry point to some of the public who ‘didn’t realise this was the reality’ according to Vegan Friendly.

As the first large-scale ad campaign in the UK, this is a positive step for the organisation who currently certifies businesses, products, and more recently, the first Vegan Friendly certified hotel in the UK.

“This is just the beginning for Vegan Friendly UK – we are planning many more groundbreaking campaigns to help people make more compassionate and ethical consumption choices,” Bronsky added.

Is There a Diet/Covid Connection?

Miss Universe Urges Everyone to Go Vegan to Save the World