Vegan Millefeuille With a Fall Twist 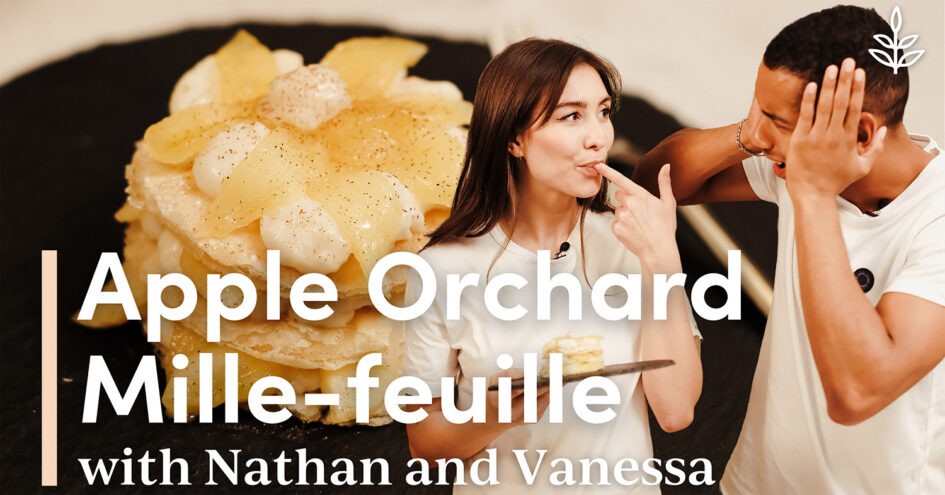 BRB — gone apple picking! On this episode of EATKINDLY With Me, plant-based chef Nathan-Josias and his girlfriend, model Vanessa Ludwig, whip up a decadent vegan millefeuille.

The duo head to a local orchard to pick their apples. In addition to scoring some seasonal fruit, Nathan-Josias says he enjoys picking fresh produce because he feels better connected to the Earth. “You get back connected to your food. You can see here, this little spider that’s hiding in the apple. You can see the life that’s related to food,” he says.

He also notes the sustainable impact of buying locally sourced fruits and vegetables. “What I really like about apple picking, or any fruit or vegetable picking, is it’s local,” he adds. “So you reduce enormously the ecological impact that you have.”

How to make vegan millefeuille

“Apple picking was fun, but I can’t wait to make the cake,” says Vanessa. So, with their apples in hand, the pair head home to make their vegan millefeuille. The French dessert, which means “one thousand layers” in English, features several thin layers of puff pastry. The layers are filled with creamy fillings like custard, fruit, and whipped cream.

“Usually, it’s made with chocolate and a vanilla custard,” explains Nathan-Josias. “But it’s usually full of dairy products. We’re going to make a vegan one with the apples we have.”

Once the apples are sliced, the duo make homemade caramel using vegan butter, sugar, and a pinch of salt. Then, they whip up a vanilla custard using plant-based milk, sugar, vanilla extract, and cornstarch to thicken the mixture. “So, this is the last step: We have store-bought puff pastry,” Nathan-Josias says.

So, how does it taste? “They’re really, really soft and taste amazing. It tastes like candy. I love the cinnamon on top,” says Vanessa. “Apple and cinnamon is the best combination you can have,” adds Nathan-Josias.

The 16 Best Vegan Pumpkin Spice Products To Try This Fall